Okay so my wonderful and sweet stepsister em got me season two of the O.C. for my birthday. Which of course she had to because it’s totally her fault that I am AD-DICT-ED to the show. Let me set this up for you: So it was last fall, late fall, and I was an O.C. basher, that’s right, me. It’s hard to believe now, but this is true, I was. So then I was at my dad’s, they were all out of town and Emilie had some of her DVDs sitting around. But tons of the cases were empty because she took them to watch on their trip. So there was the first couple discs of the O.C. there, and I was like, "what the hell, why not?" so Bj and I sat down and watched one. Then we freaking flew the rest of the disc. Took the second disc down to Corvallis, and went through that really quickly. Well then I was like, what? What Ryan just saved Marissa from TJ and I have to know what happened, like did they pump her stomach, are they going to kiss, what about Summer and Seth. Ahhhhhhhhhhh!!!!!!!!!!!! So of course I had to drive to Albany because I couldn’t find any place that had the first season in C town. So we drove to Albany, drove back and stayed up until like three AM watching them. We TiVo-ed the second season while watching the first and quickly caught up. The rest is history. So I’ve been watching the O.C. season two, and scrapbooking. 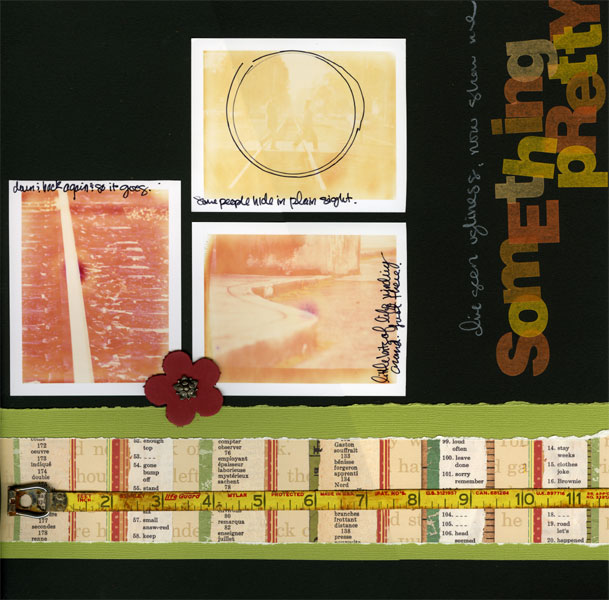 Now I really like the stuff I’ve been working on. But I have the feeling I that I must be my  own brand of cool because no one seems to like my stuff much. You know, I’m cool with that. Because I freaking love the layouts I’ve been doing. I’ve felt so free. Man, and just playing with my stuff. I’ve come up with some new rules for myself:

1)Do not worry about the scrapbooking item being the "last" one. You have a lot of shit, just use it.

2)Just because somethings were not made to go together, doesn’t mean they shouldn’t (not really a new rule).

3)Make a mess, just clean it up later.

5)Scrapbooking without Diet Coke is NO GOOD.

um, maybe more too, but those are the big ones. So ya, using tons of stuff, playing, it’s all good. All good. And if you want to check out all of the layouts in their posted glory check them out here, here, here, and here.