Because it is so not. The night before I went into labor I enthusiastically ripped up the paper protecting our wood floors and vowed we were done, no more workers upstairs at least. Of course they still did pop up a bit to finish a few things. And when Tutu was a couple days old they started on the front porch (we actually had a pile of rubble at the front door when the first visitors came to see her). After the porch was put on (and the bathroom downstairs tiled, and a few other random things), we had no workers for a while. But the other big project could not be started until the weather was somewhat "stable" (meaning not raining 24/7). And that would be the siding project (because we didn't really want to match our existing aluminum when we did the upstairs). Let's call this photo the before: 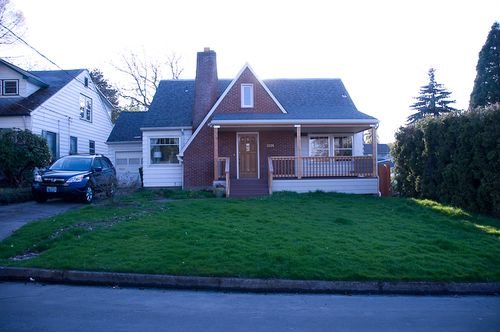 Though this should probably be the real before. I took that picture almost three years ago before I even bought the place. From the front you can't tell we remodeled the upstairs, which is what we wanted. But from the side you can: 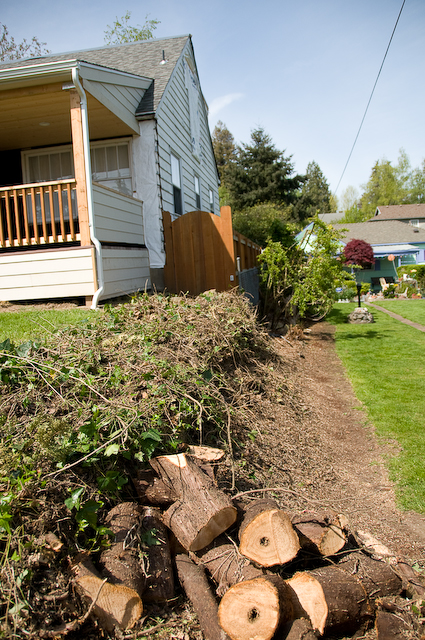 Oh ya, did you notice something else? Like the absence of even more barriers between my neighbor and I? Imagine my shock when I woke up from a nap with Tutu and found my neighbor had commandeered the tree trimmers I hired to cut down the whole hedge. Since that protected us from the intersection as well we are now meeting with landscape people as well. I think it will turn out to be for the best. We had the property surveyed and found out that our yarn went further over than we thought. We also have a rock wall buried under there, so it's quite a ledge, and we'll need to put something up so Tutu can't fall over the edge. Oh the tree trimmers were here to take care of this:

Our jungle. We had some issues from an ice storm a couple (okay five) months ago, and I'd never had anything trimmed up. Of course now this picture is outdated for other reasons – the deck was ripped off to get out the old siding in the back (which is really two layers – the original lap and aluminum over the top). So we're living in this: 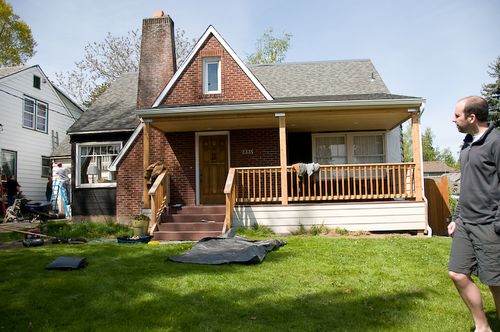 It's hard to tell from the front, but all the siding is gone, the window frames are now gone (did you know that stuff is called brick mold? I'm learning so much), and the storm windows are off of course. Oh my goodness it is so loud now. The windows might as well be paper, and they the workers might as well be ripping nails off on the inside. I think it is going to be awesome. And I'll finally get to tackle the yard, something I've been wanting to do for years, but knowing that this and than that had to be done, it was not very motivating to plant anything for fear it would get ripped apart. Those fears were well founded as you can see.

Projected project completion – oh these things are supposed to have those?

P.S. I have to give a shout out to my friend (my architect friend – how cool is that?) Matt, who figured out how we could put a porch on in like five minutes and we were at a loss as to how to do it for months because of the weird roof line. Of course it looks like the obvious solution now, Matt = genius.