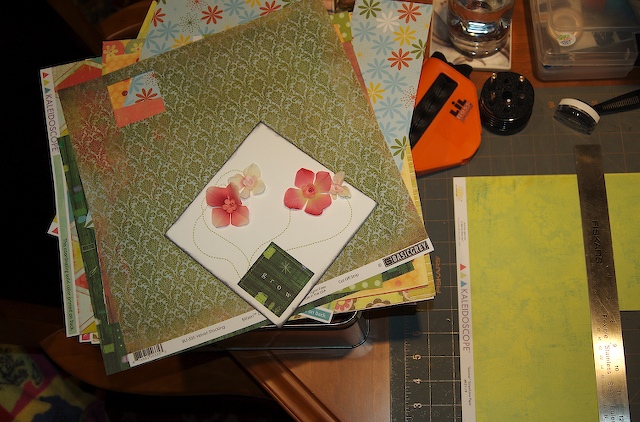 I was bored last night over at my dad’s so I brought a bunch of stuff over. Working on a late birthday card, and playing around with paper. I really have hard time not being in my space with my stuff. I do NOT however, have a problem sleeping in my dad’s bed. Tempurpedic = heaven!!! I do not like getting out of the bed early though. And when it’s dark out, that’s too early. Emilie did the funniest thing yesterday. I wake her up every morning because she’s not so good at getting herself up. Well the night before last I put in her hair extensions for her and so she had to wake up earlier than usual because she had to let them set, so she couldn’t shower at night, but she had to shower because that glue smells so super nasty. So she set her alarm and got herself up, well I had mine set to go off to make sure she would get up extra early, but she came in and said she had gotten herself up and was going to take a shower. So I hit snooze over and over and over. At like seven Em’s like, "Hey Honey Buns, time to wake up! Come on, get up, get up, get up" which is what I always say to her. It was so cute, how could I argue with that?

This morning after dropping her off I gave my room and bathroom a deep clean so when I come home on Monday it will be nice and fresh. Ahhhh, I love how I get all I-want-to-cleany (does that make sense?) when I have other stuff I know I should be doing. I mean if you’re going to procrastinate by cleaning that’s not so bad right?  Anyway Em and I are going up to Beaverton this afternoon to drop some stuff off at Bj’s. I won’t be able to see him this weekend. I’ll have not seen him for like 10 days by the time I do see him next, argh, annoying. But I might go with him to Seattle next week since he can just drive there (not like the place he is this week: Toronto). I’m so excited at the possibility. I’ll have the daytime to myself, so I have to figure out what I am going to do that does not involve shopping. Because I have been so good. During my cleaning this morning I found all the miscellaneous receipts for January and I’ve spent the least amount this month than any other month since I’ve been keeping detailed (really detailed) track… like two years. Unfortunately the 853.17 it takes to survive on (rent, cell phone, insurance, gas, some food, and the big other) is less than I make from Ribbon Jar. But hey I’m trying. 🙂