Go ahead. I probably won’t be alive anyway when my mom sees this: 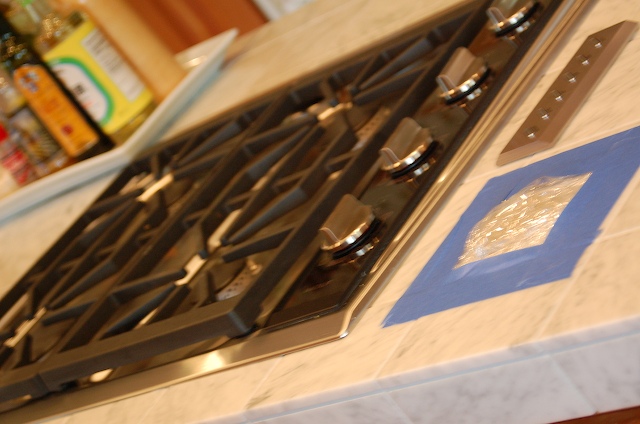 Remember how I said we were getting our kitchen redone a bit? New counter tops, stove, sinks, blah, blah. Well it’s mostly done (we still need new knobs and wallpaper), it was finished right before my mom and Bill left on a spring vacation. The night after they left I cooked dinner for my Dad, Emilie, and Sciarrino. I was being so, SO careful. My mom had only told me like FIVE HUNDRED TIMES that acid was bad for the marble, so bad. That I had to clean it up right away, if there was any juice, tomatoes, fruit, etc. So I cooked this yummy Moroccan chicken, squeezed the lemons on the other counter, no problems right? WRONG. I went to clean up, it had to have been a maximum of a half hour after the thing got set here. But it was too late.

I had made a sauce and poured it into the stock from the cooking chicken to get a gravy. After I poured it in from the baby Pyrex the sauce must have dripped a little over the side. When I went to clean up there was a yellow ring. Heart attack? Ya, I came close. My mom had said "dish soap only!" on the counter tops so I got to scrubbing. My dad started rubbing it with his finger ("this is just going to fade right out"), meanwhile I found more and more spots. These were like water spots kinda and something I know I didn’t do (especially because some of them were on parts of the counter I didn’t use). I scoured the house to find the tile guys number. Eventually I got a hold of him and he came over the next day with his boss.

I showed them the spots, and I told them that I made the one, but the other ones I don’t know how they happened. They looked at them all and were pretty confident they could get them out. So a week later (and a mere seven hours before I go to the airport) a guy comes over to fix it. He looks at the littler spots, the water spot type things and says that it must be from grape juice or something. I might add that the whole tile company seems to think I threw a huge party: direct quote "we wouldn’t be upset if you did and we wouldn’t tell your mom." Dude I DIDN’T HAVE A PARTY!!!! The one guy today acted like I took juice and loaded it up in squirt guns and went psycho killer on the counter tops. So he works for a while and then, "how’s it going?" I asked tentatively, "Well, I’m not going to be able to get this yellow out." Bells start ringing in my head. He says he can do one thing, this poultice, but it has to sit 24 to 48 hours. DO IT!

So that’s where we are at now. I haven’t written about it all week on the off chance my mom got internet accesses (I feared the news would ruin her vaca). Now they are in an airport waiting for their flight and I have knots in my stomach. It was my one thing, not to ruin the counter tops. Ahhhhhh. So if I don’t post in a while it’s because I’m trying to find a new place to live with a pool, garage, studio, ribbon room, and private bath for the same $200 a month I pay now. Wish me luck.