Okay so yesterday my worst fears (at least regarding my iPhone) came true. I had a very full car load of orders and was at the post office taking one of their carts back and forth from my car to get all my packages inside. The third and last time I did this I unlocked my car only to have the alarm start blaring. This happens every so often with my car and all you have to do to stop it is put the key in the ignition and turn it once. So I leaned into the car to do that while holding the metal cart with a foot to keep it from rolling. As I leaned in my iPhone dropped out of the front pocket of my handbag and landed on the pavement. I picked it up, plopped it back in my purse and finished up at the post office. When I got back to the car I took it out and looked at it. It had some nice sized dings on the top, but the main problem was that the off button was permanently pressed down. There are only a few buttons on the iPhone and this one locks the phones as well as turning it on and off. So I had a problem. I brought it home and Bj was, um, upset to say the least. I was upset. I called Apple Support (crying) and they told me I could send it in or go to the Apple store closest to me (45 minutes away). I opted for going to the store, and wanted to go right then. We drove up but we didn’t have an appointment and it was too close to closing to get one, so we had dinner and headed back. While we were driving I called and made an appointment at the genius bar for the next day (today).

I went in today with my head held low. When it was my turn I explained what had happened. And do you know what they said? "You are lucky you did this now, right now we have a policy of trading straight over broken for new iPhones, but I don’t know how long that will last." I was smiling like a goof ball and a half. I couldn’t believe my luck as he popped out my sim card and put it into a brand new phone. Not only that but I got all brand new accessories as well. And I bought a case, because I am so not taking any more chances. All I had to do when I got home was sync it with iTunes: 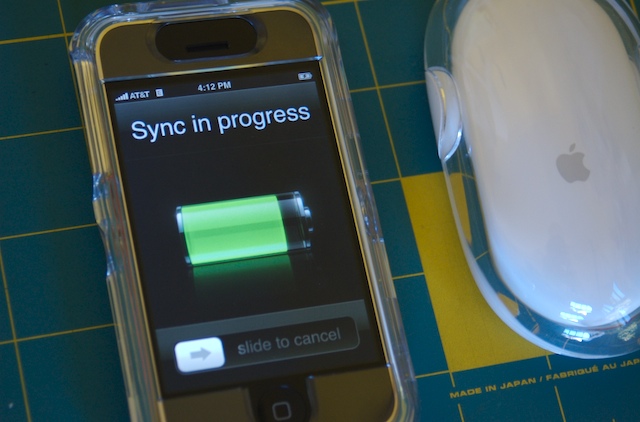 Done and done. I told Sciarrino that when it comes down to it I get more good and I’m more lucky than not. To that she replied, "hell ya you are, and if you ever think different I’m going to come over there and smack you." Awe. Thanks Sciarrino.

So ya, I heart Apple. I can not think of any other company that would do this.

What’s the luckiest thing that has happened to you lately?