Where have you been? It’s bad when you get called out for not blogging in real life. So I thought I should update. I wish I had one really amazing thing to tell you that I have been up to that has kept me from doing so earlier, but really it’s lots of fun little things. First off Thanksgiving. Despite V getting a bit sick and her and her parents not being able to come everything with out with out a hitch. I put a turkey in the over at 9:30, whipped up a couple of stuffings, and made the gravy. Bj worked on the appetizers, everything else came potluck style, second year in a row I did this and it worked great.

Then the next day was Emilie’s sweet 16. I can’t believe my little sister is 16!

So sweet indeed. Before her party I walked around with her and her best friends to take a few photos of them: 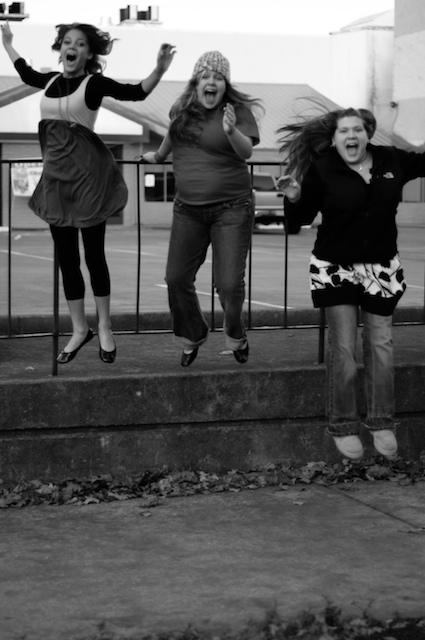 They were totally into it, really fun. Then I helped out at her party. It started at a hotel down town with pizza and french fries (ah to be 16). Then Bj and I were the chaperones to walk them seven blocks to the movie theater to watch Dan in Real Life. Walking with 30 teenagers made us feel a bit like we were in a parade. Man 16 year old boys can be hyper. I had to break up a candy throwing fight on the way back ("boys stop, that’s littering!!!"). Then we had dailies) and they played electronic catch phrase (super fantastic game).

The rest of the weekend was clean up, crafting, sleeping, etc. No shopping for me. I’m trying to do mostly homemade gifts, as always. We’ll see how that goes. Updates sooner, than later, I swear!