Oh my goodness you guys, thanks for all the baby love! I’m glad you think my bump is cute. I ask Bj pretty much every day, "do I look fat or do I look pregnant?" It’s one of those stupid girly questions that really only has one answer. But I do really feel that it is a defined bump now, and not the "gut spillage" I experienced for a while. Ah, ya, I guess I never really thought, "hey where does everything go that was down there?" before. Answer? It goes anywhere it wants. Or as a nurse told me, "You should see C-sections intestines, even stomachs sometimes spill out the sides." Oh good lord. What happened to those pictures from the World Book Encyclopedia with the baby just sort of sitting on top of everything? Those guys were big fat liars. Anyway.

Who wants me to recap the first trimester? No one? Too bad. It was yucky. I was so so so excited to be a mama, I mean it was pretty much my life goal. I have not qualms about saying that. I would totally be lying if I said that anything else has ever been as important to me. It’s all I’ve ever wanted and we have beta-max tape to prove it. And at the very very beginning I was like, "this is cake!" And I quickly knit up the first little sweater. Then I started feeling crampy. Then I started feeling really cramping. Wake me up in the middle of the night menstrual type cramps. Which of course I couldn’t take anything for. Then my boobs started killing me (and growing like, whoa). Then I got sick. But I didn’t throw up because I don’t like to throw up (I admit now it might have helped the situation). Then I got so tired. I sat and watched TV and couldn’t even knit. And I didn’t blog because what was the point. I wasn’t doing anything. Doesn’t that all sound so terrible and over dramatic? It does to me now as I feel just fine most of the time. I still miss my diet coke of course (Diet Coke I looooooooove you!!!!!!!!!!!!!!!). And I’ve just realized that I can’t sit with my knees up to my chest anymore. But other than that it’s all good. I’ve bought only a tiny little minimal amount of baby stuff as we won’t have a baby room until after the baby comes. And we’re not finding out the sex and most things are sickeningly boy or girl only ("you’re a boy you will love baseball, you’re a girl, you will like pink!"). So I’ve been good. I do have a big wish list though (going to sidebar that one when I have time), including a ridiculously expensive English pram. Doesn’t every baby need an English pram?!?!

Now this weekend. I went to visit my other favorite baby. Who is not really a baby any as she can fully speak and pose and run around and do all types of fabulous things.  We also asked V to pose:

And she did this and it was so funny. And I can’t believe she is old enough to do things like this, it is so funny. She has also gotten ridiculously tall. Like 3T tall, but still 2T skinny (hence the belt). And next week she’ll be two!! So my baby will be 2.5 years younger. More than I thought, but hey, I think they’ll still be buddies. 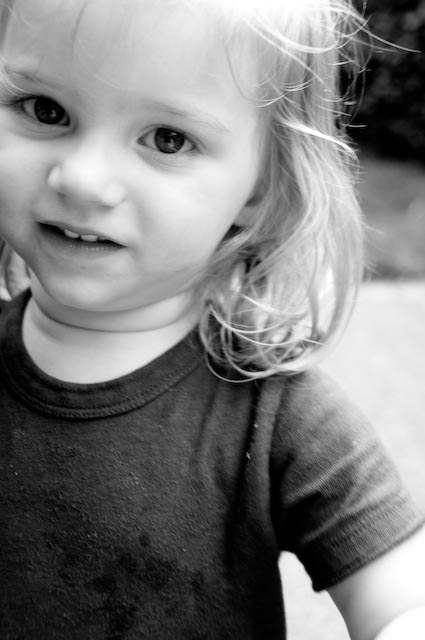 Awe. The little munchkin. I love her.

So Bj and I had a low key Independence day there (BBQ care of Brett, yum). Then we came back for fireworks at my dad’s. Where I found out my brother had already told pretty much the world about the baby. So I guess I lost that bet (Oh he won’t tell anyone!). Our mother’s did a much better job (and this is why they got told first!). I didn’t really think anything was going to happen. I think it was more like this special thing between Bj and I for just a while. It was a nice little secret that led to cute whispered messages on my phone that said, "I love you, and the baby too!" (and I rebooted my phone and it deleted it and I almost cried because it was so cute). Bj is so funny about the whole thing, by the way. The first test I took I made him read and he said, "sorry it was negative." And when I went to check it I said, "you dork, this is positive." He claimed it was too light, and I think only really believed it when my  boobs popped out of my bra a few weeks later. Now he gets this adorable, idiotic, so happy look when we hear the heartbeat. It’s so cute. Oh and when I had all that cramping I had to have an early ultrasound. We walked out of there and Bj gave me a high five, "there’s only one, yesssss!" Now if only I could get him so excited about organic lawn care….

Coming up this week: grandpa updates, knitting updates, ribbon updates, and? Just know I’ll be more active on here now that the secret is out. I was worried I’d lost readers forever. 🙂