Oh my I don't even know what the last 24 hours have been so insane. And I don't mean an itty bitty bit insane, an annoying tiny bit insane, but full on CRAZY. Let me back up. Last night I was sitting here in bed blogging, thinking, "Gosh you're so lucky Amber. Sleeping baby, plus comfy bed, plus internet time on the husband's computer, score!"

And then the universe was like POW! And Tuesday woke up. No big deal. This was about 11:45 and I usually feed her around midnight so I went in, picked up my little bug and settled into the glider. I fed her and put her down. I was a little antsy to get back to my show on Hulu and didn't stay as long as I normally do to pat her back. This turned out to be a horrible mistake and as soon as I got snuggled up again she was awake crying for me. I went back, picked her up and tried to calm her, but she was starting to get really upset, and I was starting to get really tired so I figured I would just nurse her some more. Well she was pretty much asleep on the breast so she nursed really slow. But when ever I tried to get her to finish she complained. I started thinking maybe something else was bothering her so I checked her diaper, it did feel a little wet so I changed her, getting her all upset again.

By now it had been an hour and was a quarter to one, so I figured maybe she should sleep with me. At this point I should say Bj was away on a business trip and I was not thinking so clearly after a few days (and nights) of full Tuesday duty. I unplug her fan, balancing Tutu in the other arm, and plugged it in my room. I laid down on the bed, laid a (by this point sobbing) Tuesday next to me and nursed her some more. Only same problem, as soon as I took her off the breast big tears. But now it was worse than ever. I thought if I could just lay there and pat her back she would be happy. I should know better people, SERIOUSLY!  The girl has not liked sleeping in our bed since she was six weeks old. But I keep hearing stories of my friends and how their babies just relax when they are next to them, not my girl. So I pack up the fan again and head back to Tuesday's room.

She's a crying mess by now, and I text Bj that I am really struggling. He's still up working on a project so he calls me. I put him on speaker and one little, "Hey Tutu it's papa" and silence. She just stares at the phone, like THAT is what she's been waiting for. She turns happy, but is not recovered enough to sleep, oh no. She is up, as in AWAKE. It is a quarter to two at this point and I just grab a pillow and blanket and lay on her floor while she reads (okay rips apart) a book and plays with her stacking cups, occasionally pulling her away from the bookshelf (we need to figure something out there, danger). I finally see a yawn 45 minutes later and decided to nurse her again and put her down. I haven't wanted to let her cry because Sciarrino is sleeping downstairs on my couch. Well I mean I never really can let her cry, but that was another reason. So I nurse her. She is so calm and so ASLEEP, yes! I pick her up off my lap, give her a cuddle and go to put her in the crib. This is when I realize she has peed through her diaper, probably because of all the milky. I lay her on the floor and she is out cold, of course. I have to strip off her wearable blanket thing, nightie, and diaper, so of course she is awoken by the end, and upset. I nurse her again and finally at 3:30, 2 hours and 45 minutes later she is sleeping. I crash in my bed and don't hear from her again until 7:45, when I go in, nurse her, and put her down. Because when you go to bed at 3:30, 7:45 is the middle of the night. We slept in until 10:30 and I could have used, oh I don't know about forty more hours.

I'm sure I did a million things wrong there. But man, it was rough. When she woke up she had peed through her diaper again. I ran out of night time diapers (I used fuzzibunz for night) and the regular ones aren't absorbent enough for her at night. I got her all changed, nursed her, and then got ready myself. We were headed to Portland today. I was happy that I got out of the house by 12:15, but had to make a stop to get a copy of Sciarrino's key, in case I needed a place to crash up north during the day. After I made the copy I called Sciarrino to drop off the original and she was at a little antique store. Oh darn I would have to go and drop off the key. And: 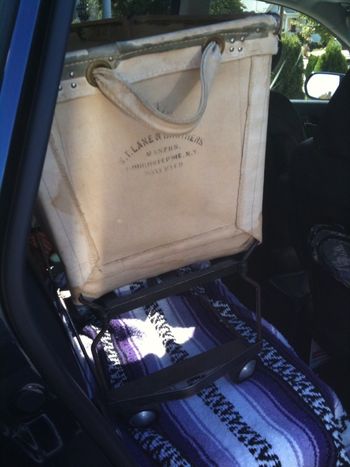 impulse buy. The coolest bin ever. I decided we couldn't drive up to Portland with that, and Tuesday needed to be fed again by this time any way. I was close by home still so we went back. I decided to change her first and of course she had peed through her diaper (I swear this never happens, just a crazy day). So I had to change her completely. Then feed her. Then we were on the road. Only the light came on for tire pressure so I had to stop and take care of that. And be a total girl and get help from the attendants because I know next to nothing about my car (terrible, just terrible, I hope Tuesday has some car skills). Then I am finally on the road. And I met my friend only two and half hours late! Luckily Matt is a wonderful friend and was not upset. He is in town just for a week, for his brother's wedding. He lives all the way in New York and I would have been crushed not to see him. You may know him as the One Who Came Up With My Porch Design. He thinks this is no big deal, but I love him for it. We ate out, Tuesday had a little bit of the potato leak soup on the menu, which she loves. We went for a walk and ran a few errands. 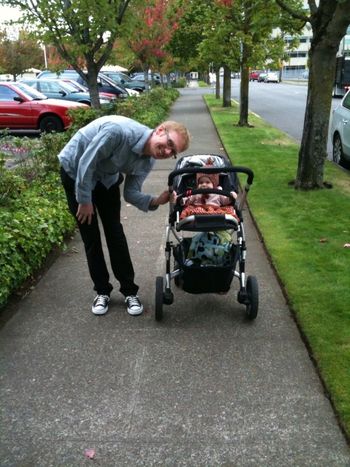 Matt and Tutu had fun making faces at each other. The day went super quick and by six we were back at his mom's house and I was feeding Tuesday (yes, she had a five hour nursing gap in there – I couldn't believe it!). I left to pick up Bj at the airport, we had dinner, drove home, put Tuesday down and now it is 11:27. I figure that has to be the worst night ever, right? I mean tonight is going to be fantastic, because even a little bit better would be great. I guess I'm just an eternal optimist, I'll let you know how it went. Signing off,