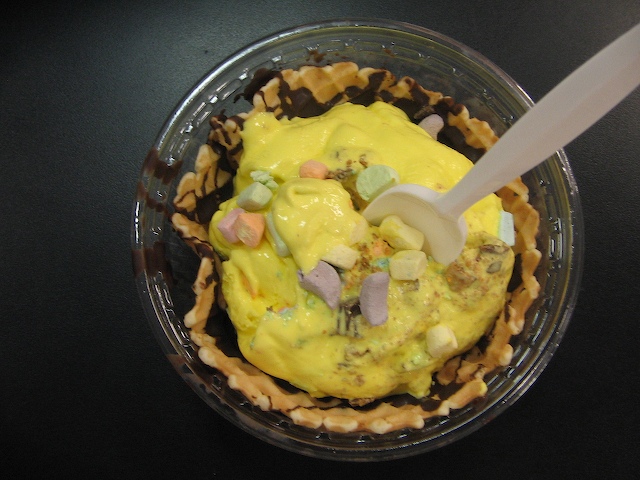 The next day Ceara and I just messed around really, looking around town and stuff. Then Monday Ceara worked,  I mostly knit, I really rocked some stockinette stitch! We had pizza again – bacon, pepperoni, and banana peppers (wait I mean for the first time, right Ceara). The next day we headed back to Memphis and walked around Beale Street. I had a wonderful ice cream concoction: yellow marshmallow ice cream with Reese’s peanut butter cup and the marshmallows from Lucky Charms all mixed together in a Heath topped waffle bowl. If someone knows where I can get more Lucky Charms marshmallows let me know!
I had to fly out that evening and we cried like crazy of course saying goodbye. I had a fairly good flight back, that was of course, until my last leg. I got seated next to a family, and a little tow head was my seat mate. That was fine, I love kids. Had a nice little chat with him, he told me he just turned three, totally cute. His parents were very old. The dad was at least 65 and the mom probably 47. So I had to do a major double take when she whipped out her boob and started breast feeding… to a kid I had just had a conversation with… with all his teeth!!! Not only that, but no blanket, and she did it for like an hour switching sides and giving him sips of pop when he asked for it in between. Ewwwwww. Yes, I am all for breast feeding, but that was nasty, and right freaking next to me. And no I haven’t see that episode of Desprate Housewives. So on that note, goodnight!

6 Replies to “Good googley moogley, that thang is juicy…”