I pretty much have Michele on the brain (no baby yet!!!) and have been entertaining her by sending emails about this and that. They always end with, "so have you had that baby yet?" Anyway last night I was thinking of something funny to write her and I came up with some Deep Thoughts by Jack Handy (from SNL years ago). I sent her a few:

Maybe in order to understand mankind, we have to look at the word itself: "Mankind". Basically, it’s made up of two separate words – "mank" and "ind". What do these words mean ? It’s a mystery, and that’s why so is mankind.

Most people don’t realize that large pieces of coral, which have been painted brown and attached to the skull by common wood screws, can make a child look like a deer.

Sometimes, when I drive across the desert in the middle of the night, with no other cars around, I start imagining: What if there were no civilization out there? No cities, no factories, no people? And then I think: No people or factories? Then who made this car? And this highway? And I get so confused I have to stick my head out the window into the driving rain—unless there’s lightning, because I could get struck on the head by a bolt.

She found these "so &^*(^%%)) funny" and not just because they are, but because we had done a project at Oregon State involving Deep Thoughts in the quad one year. A lot of the artists we went to school with were very moody and wanting to make all these statements. And of course we wanted to make statements too, but in a not so obvious way. Here was our project: 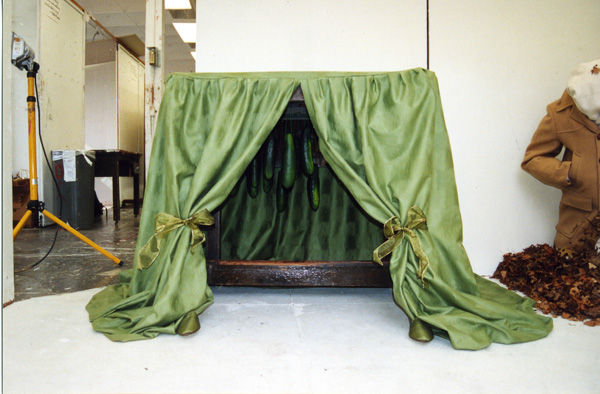 I called it Penis Envy. The assignment was a sort of mini instillation, using only our studio spaces (upper level art students have their own spaces at Oregon State so things can remain set up). Michele and I were fastidious about detail, her piece is on the right. At the very beginning of the term we repainted the entire space stark white. And we only had this desk in there. I designed this piece around that desk, made the skirt, found the shoes (by sheer luck at the local Goodwill), and carefully selected the cucumbers. I don’t need to explain this piece, you can take from it what you will.

I’ve realized that my car won’t fit in my miniature garage and have decided to make it into a "smelly studio" where I can have oil paint and pastels and all sorts of horrible messy things out. I hope that this combined with Michele and I hanging out a lot more this will help me get back in touch with the artist with in. People tell me I’m "so crafty" or "really creative" but to me it means a bit more to do a piece of art that, maybe only one person gets, but they get it so deeply that there is this good thing put out into the universe. This understanding, a connection.

Speaking of connections, go check out the old letters Alicia found over at Posie Gets Cozy and summarized. Oh! She just posted the second group, gotta go read.

and one more deep thought:

I hope life isn’t a big joke, because I don’t get it.