On Saturday Bj and I went to his friend Salman’s wedding. Well it wasn’t actually a wedding, it was a kind of ceremony for the bride to say goodbye to her family and the families to join (as I understand it). I really had no idea what to expect, I had sought out some help in this matter from my Indian neighbor, but things went horribly when I didn’t choose my words very well. I told her I had been invited to a Pakistani wedding, and asked if she would mind going over what everything meant with me. She said yes, and then as she was leaving, "you know I’m Indian right?" I was like, "oh, yes, oh no, I do know that, I just thought that it might be similar." Oh I felt so horrible. I should have said, "I know you’re Indian but." I apologized, and my mom apologized for me, but she’s still not really talking to us. Anyways we had no idea what was going on. It was funny because Salman called Bj and told him to come an hour late because we had to walk in with him and when we got there none of the other white people had been told that and all Bj’s coworkers were sitting around not knowing what to do. Eventually we did go in, and then the picture taking started. The bride came in and she was beautiful, and her outfit probably weighed fifty pounds:

I really want to wear a sari someday. sigh.

Then yesterday I decided I just couldn’t stay away from the house (I know, surprise, right?). So Bj and I drove back down to Salem and went to Home Depot where I watched my card get used for the millionth time. Got lights, new thermostat, smoke alarms, and gravel. Bj installed the thermostat, and it’s so easy people. If you have a fugly old one on your wall where you just move a piece on the bottom you should upgrade to a programmable one and save yourself some crazy energy money (plus it looks like five million times better). I put up all the little light fixtures since the ceilings are done (finally after five coats!) and oohed and ahhed over the quarter round instillation. Seriously I am in love with my carpenter! Then it was back up to Portland with Karen and Sciarrino. We dropped Bj off in Beaverton and headed north to go the Kelly Clarkson concert in Auburn. We were totally crazy to do this I think, in a good way. We got the tickets forever ago and it took freaking forever to drive up there. What is with traffic like that (no wrecks or roadwork) on a Sunday night? We were late, but caught the last song of the opening band, Rooney. Un holy hottness, that lead singer is very nice, very, very nice. 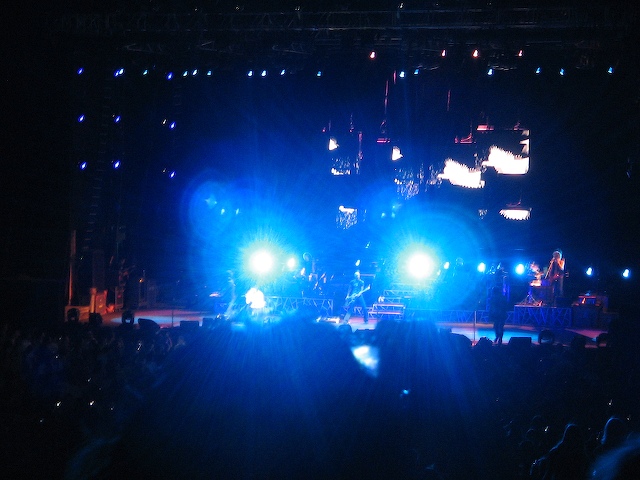 (another big screen shot)  It was so much fun. I don’t know very many of her songs, but she was great live. It was really cool too because it was there last show after two years of touring and so there were all kinds of pranks on each other, and people in skeleton suits, and gorilla suits, and roadies holding up stuffed Nemo’s while she sang. She even came up to the middle section so she was pretty close for a while.

The thing that sucked was the drive home. Well I didn’t drive because Sciarrino drove her new GTI, but we got back so. so late (3:45am) we totally should have stayed the night, but none of us have that kind of money right now, and we all had to work today. My mom woke me up early this morning and I just about killed her, she kept talking to me and I was like, "GO AWAY!!" So it’s back over to the house today to check progress, and paint.