This weekend started out with a very long, very necessary, but very long (yes I said that twice) overall strategy meeting about the wedding with our coordinator. "Ohhh drive me Sciarrino," I said, "I think the meeting will only be an hour and we can meet up with everyone after." I was supremely focused (about as focused as I get I guess) during the meeting and knew Bj and Sciarrino were getting multiple calls about our status, but I was shocked when I got into Sciarrino’s cute little car and realized we had been in there three hours. It was all time-lines, details, costs, etc. stuff. And since I’m all about the details I was enthralled. But I was also getting hungry so I was really glad when we showed up to Doug Fir that Brian and Melissa had a table and I was able to scarf down their extra three onion rings before ordering my own dinner. We crammed into the funky, but almost too cool, round booth along with Beachwood, who met us there, and Matt stood nearby since he happened to be getting an after work drink with a crazy colleague (well he was, oh and sorry we didn’t stop by Saturday, I have no excuse, except it was late and I had just jumped in a puddle and got wet, and wrapping up in a blanket and watching House seemed like a better idea). The concert was so-so, and their jeans were very tight, and the bass guitarist even had his tee shirt cut so you could see his Levi’s label. Hmmm. Oh and they butched the only song of their’s I really know.

The next morning Sciarrino left before we even thought about getting up and I went through a few wardrobe changes before settling on something for the engagement photo shoot (I know, I know, we’re pushing it since the weddings in mere weeks). We were headed over the bridge to find a mythical wall I had seen once that had fantastic texture but haven’t seen for months when I remembered the pearl. I had been walking around there earlier in the week when I fell in love with a printmakers cabinet (and no I’m not telling you were it is, or how much it is or anything else about it, because it’s fabulous and I want it). Anyway I was like, "no turn here!" and we found lots of great walls and called the photographer to meet us over there. He said the shoots are about 30-45 minutes, we took two hours. We like to think that’s because we’re ultra cool, but who knows we might have been cheesy subjects that took too long to get a decent shot. I’m going to go with the former and say that I can’t wait to get my disc in the mail next week. And he should have something up on his blog soon(ish).  After the last few shots (jumping in a very suspicious puddle, since apparently Portland knows how to drain rain water and we couldn’t find anything cleaner/bigger) we headed home (to Bj’s). Where we ate Burger King and watched the first disc of House.

We stopped at Fry’s to get a cable to hook up this beast: 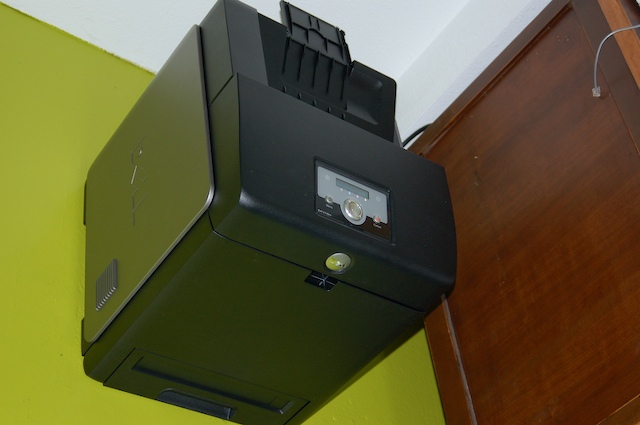 That’s right Ribbon Jar got a color laser!! Because it just felt wrong to keep printing out the gift certificates in black and white. And because I like color (SHOCKER). I see many buttons in my future. Anyway we didn’t actually get to that until today because we watched a lot of House. Then we slept in and it was so sunny my Oregonian brain thought I must be getting sick to think it’s so nice out so I stayed in my jammies until four when my brother came over and I opened the door and I was like, "it’s hot out!" So then I had to get moving and open all my windows and let the early spring in, and shower and stuff. But after all that work I just put on joggins and sat back down with a frozen pizza, watched some more House and got Violet’s newest outfit almost done (hey, it’s wedding related). I finished the whole first season (including the extras) and while you might think this pathetic, I find it glorious. Knowing tomorrow I’ll have to go back to maxing out my cell phone minuets, packing orders, fretting about details, and begging people to turn in RSVP cards, I think I was due a nice do-nothing-day.