Yes, patience is a virtue, I know that, I also know that I myself tend to get a little antsy when it comes to waiting. But I think I did pretty well all six hours that I was in line at the AT&T store by my house yesterday. I had fun talking to the girls next to me (who were both getting paid, one by an uncle, one by a boss, to wait in line). I Laughed at the antics of the guys in the front:

As taken from our local paper. You can almost see me down on the right in an orange jacket. My rain jacket, because it was totally raining all day. This was the only place in Salem to wait under cover, so that was cool. And they were sweet to bring us cookies and pop: 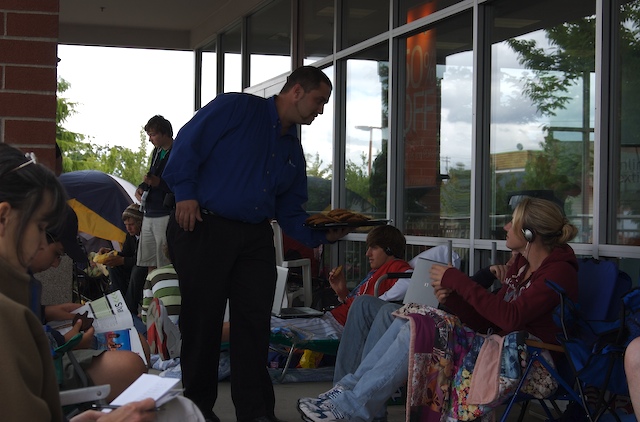 When I got to line I was told I was number 17 (and 18 with Bj who joined me after a few hours). I kept begging the guy to tell me how many they had, but he "couldn’t say, but you will be fine" is all he said. So the line got to be a petty happening place around 4:30 when the store closed. I had a cute puppy next to me: 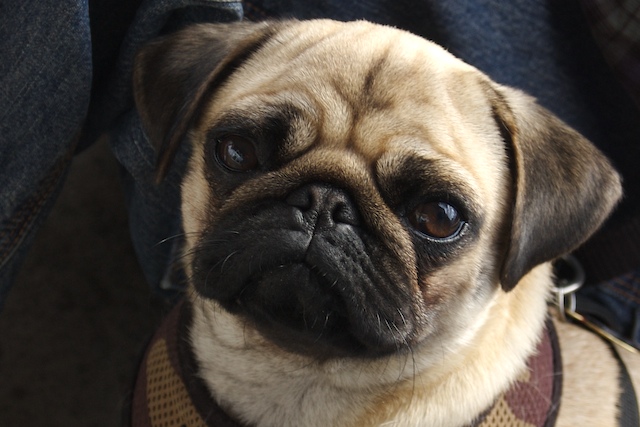 Awe. It was so sweet and good too. My dad and Kim hopped in the line a little after five. 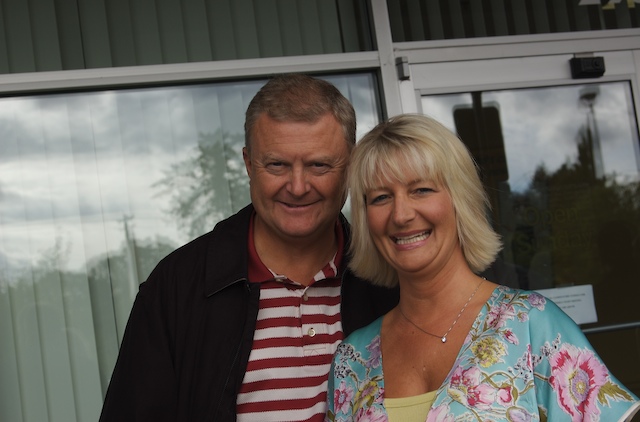 Then at six the manager came out and started talking to the people at the end of the line. I wasn’t really listening, but I heard him say something about, "we will order them for you" so I went back there to ask my dad and Kim what was up. He said there were only 30 iPhones, 15 4gb and 15 8gb. I started freaking out, asking the people in front of me if any of them were there for a 4gb, because I knew I wanted an 8. Only one guy said yes, that I talked to. I started to freak out more and more. Please I thought don’t let me have stood in this line for six hours to not get a phone! They let in 7 people at a time, so the line crept forward, meanwhile Bj was on his Blackberry trying to see what the order time online would be (2-4 weeks). Now I can get really excited about things, but when things don’t go my way I can also get very dramatic, which is what happened as I pressed my head to the glass windows and watched person after person buy an 8 gig iPhone. 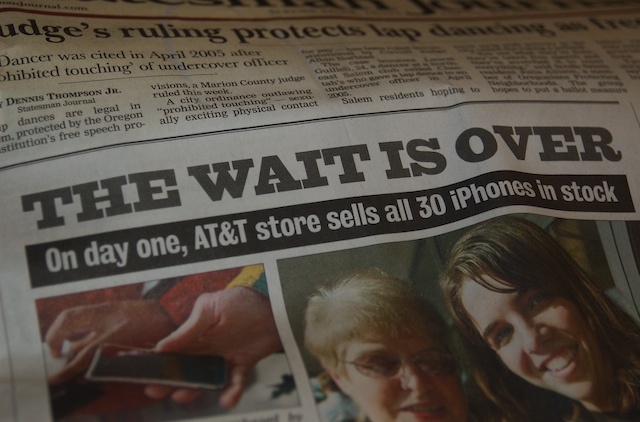 (from our not so cool local paper) Finally we were second in line and the guy in front of us was greeted by a salesperson who told them he would help them order a phone. When the next person came to get us, I just said, "take us to the counter, we want to order two 8 gigs." He’s all, "ohh let me show you the accesories, you can get those now." I’m like, "no dude, you said it was first come first serve on the ordering system and I want to get our order in." Meanwhile Bj is talking to Sciarrino on the phone, asking her to call around for us. I put my card on the counter, and let Bj deal with the sales guy so I can at least go play with one of the demos. I load my site up on it, it was so SICK ILL!!! Then Bj says, "Amber get back here." Sciarrino says Bridgeport has them! I grab my card off the table just as the guy was going to process it and Bj and I run out of the store. I told Kim and dad, "they have them at Bridgeport," and other people flee the line so we run to the car.

Bridgeport Village is a shopping center that is about 45 minutes away, so I had plenty of time to get more and more nervous as we drove. Bj had me call them again, just to make sure Sciarrino wasn’t mis-informed, and they told me again that they had a lot.  I spent the drive calling people and telling them what was going down. When I called Michele, Bj said, "have her go down there!" I told Michele that and we laughed because it’s not like you can just throw a baby in the car and go. So I was biting my nails (figuratively) and fiddling with the radio when she called me back five minuets later from her cell and told us that her and Brett were on their way there. This made the rest of the drive so much better because we figured we did all we could do. And Bj’s face when I said they were on their way to the store was one of pure joy.

We pulled up to Bridgeport and Bj’s all "duck and roll" at a stop light, so I did, jumping out and running through the out door shopping center. I forgot for a second where the stupid store was so I was a bit out of breath when I finally got there and gasped, "do you have any 8 gig iPhones left??!!?!" "Um, ya," said the friendly Apple store employee, "there in the the back." I run to the back of the store to see, and I kid you not, a freaking tower made out of iPhones. I was like, "2 8 gigs please." They handed them over and I paid, done, done, DONE. I was so squealy happy, it was ridiculous.  They gave me a little cheer as I left the shop, and then I realized that I had a husband and friends some where, so I called. They had met up in the parking lot and were coming towards me. We met up, and I think even Violet could tell I as in an extreme state of happiness because she laughed with me. Bj ended up going back to get one for my dad, who had gotten a 4 gig as a last resort, but hadn’t opened it. We went out to dinner and brought dessert back to Brett and Michele’s so it was about ten before we could get home and activate. The whole time I was rubbing the box against my face and staring at this: 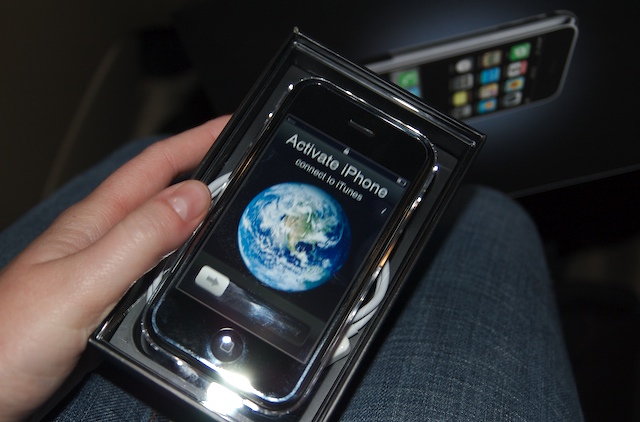 The phone will only call 911 until it is activated, you can’t access any feature with out doing that first. So we got home and activated no problem. I know some people had to wait for ever and that sucks, but 500,000 trying to activate at once is going to do that. I had already planned ahead and updated all the stuff on my mac, like the address book, etc. So when the phone said it was done syncing I didn’t believe it at first. I pulled it off the dock and ran through the contacts and all my friends were there! It was so super fast. We took our phones over to Sciarrino and Brent’s and watched a movie while I surfed the web and played with my pictures and assigned ring tones to people. Today was more of the same, playing with them putting more pictures on. The iPhone formats them so they take up really not much space on there, which I didn’t know so I was able to put all my wedding photos on, as well as podcasts, five TV show episodes, a movie, 300 songs. We went to see Sciarrino and Kathy play in a softball game today and I tried out the camera:

You know I love my Nikon, but this is perfect for little snapshots, and I even managed to do a few artsy photos: 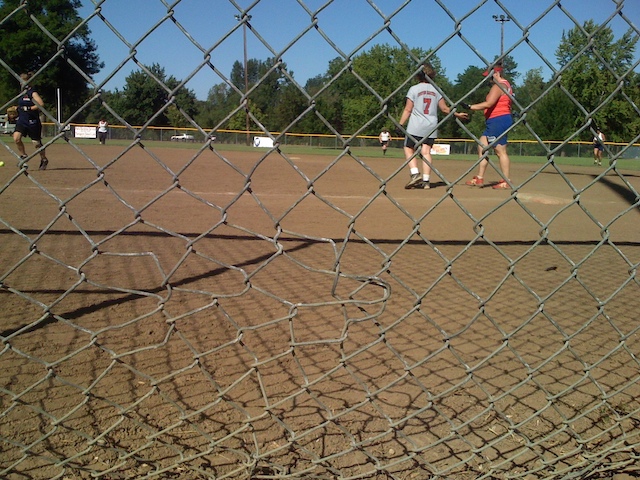 Basically I’m in love and I could go on and on and on about it, but this post has been long enough already. Yes the keyboard is really easy to use, just let the thing fix the mistakes for you and you can type super fast, yes the iPod feature is wonderful, the sound quality is great, the headphones rock, the finger flicking is crazy good, the web browser is ridiculously cool, and as one TUAW blogger said, "it seems to have been engineered by angels."