This morning my neighbor came over and knocked on my door. When I answer he was like, "come here, come here, you have to see this… don’t be scared." To which I replied, "Morris what it is?" in the calmest tone possible, "Just come look!" He started to lead me across the street while describing a scene he had just witnessed (because if anything happens in our neighborhood he witnesses it). "Well I was sitting out here when this cloud came over, like a funnel, I’m not kidding," Okay… "And thousands of bees descended on that tree" Which was now a mere 100 feet from me. "What? Bees? Oh, no way Morris, no way," and I flee back inside, "But Amber they’re just honey bees, it’s so cool, they are going to call a bee keeper and everything." But I wasn’t having any of that so I high tailed it back into my house. Fast forward a couple hours:

He had to cut it out of the tree, trying to get the queen so the rest would follow. In Oregon we are having a problem with declining honey bee populations, so you don’t want to just kill them, you need to pick them up and put them somewhere else, like not in a front yard. So he started to move that branch, which was my cue to move across the street: 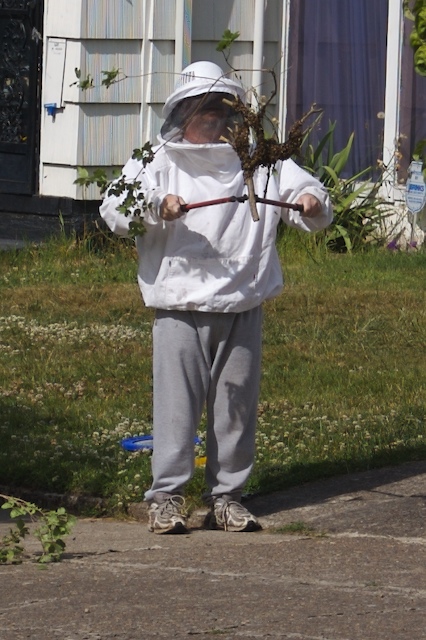 Then he said he had to sake them off the branch, which was my cue to get the telephoto lens and shoot from even further away (at this point he had already gotten stung once, and the neighboy and I had already had to do a mad run up the street):

And after that there were a lot of bees in that bucket:

Again, that was taken from VERY far away. But there were still this many in the hive:

Crazy right? I mean hours ago there were NO bees, it’s like nature is so weird I just can’t get over it. And that’s the report from the Garrison’s neighborhood for this Sunday, July 1st.