Bj and I did not plan for this trip. Not really. Two weeks ago in Vegas I pulled out the big map that came with the guidebook and said, "okay so we’ll take this road, than the Alaska Highway, then a little cut-off and we’ll be there." And since we had no idea how long any of that would take, me being the notorious, "That was a cool sign, are you sure you don’t want to turn around and take a picture?" Bj, "I don’t want to, do you?" Me, "No…. that’s okay" (my voice trails off a little at the end there). And then Bj has to turn around so we can get the sign. 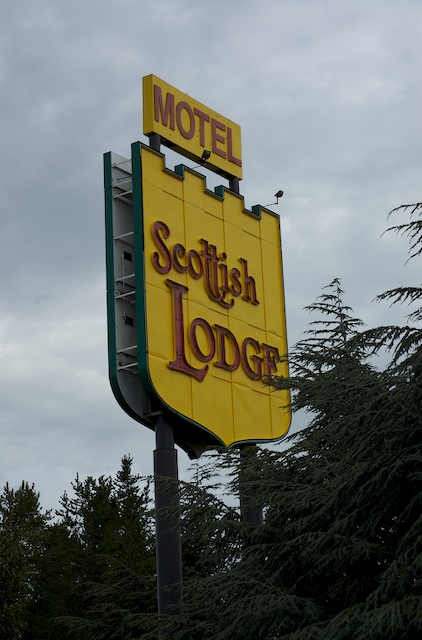 Which I knew would be alright even though it totally was NOT a Scottish Lodge, and a bit on the dodgy side. Why did I know? They had a flower garden in the front where some clever person had tucked in tomato plants, and I’m pretty sure you can’t be murdered in your bed in a motel where there are tomato plants being lovingly cared for. But I’m pretty sure you CAN be murdered in your sleep when your room has a blood stain on the floor, a bathroom type door as your outside door (read: no real lock), and soap this big: 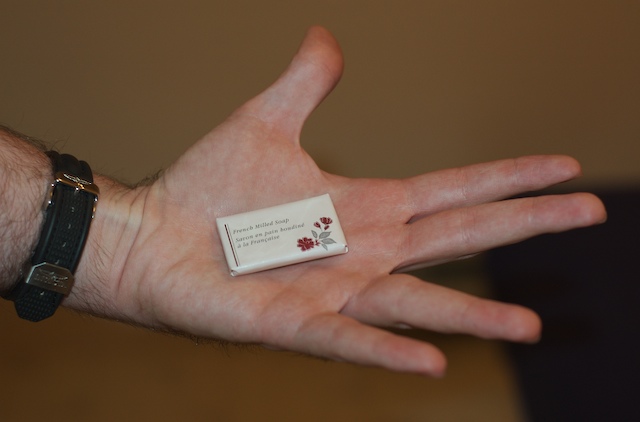 WHAT IS THAT? I was laughing my ass off at this soap. What do they repackage the slivers of other hotel soap? They must. So let me back up here. The whole day we were driving towards Dawson Creek (NOT Dawson’s Creek FYI) and we didn’t know how far we were going to get and I started to be concerned about our hotel options. But we couldn’t use our iPhones for fear of the 79 cents a minuet special Canadian rate (now looking back this does not seem like all that much).  So I say, "maybe we should stop somewhere and use a pay phone to reserve a place." And Bj is a bit indifferent, so we don’t. So we get to Prince George and the place I had just randomly picked from the guide was a nasty dive right (and I mean RIGHT) next to a fire station. Loud much? So we drove around, and around, and around. There was a swim meet and by the time we got back around to the "downtown motel" it too was full. So we had to head outside of town. When we pulled up a drunken man opened his door with a huge beer can in  his hand ahhhh, run!!!!!! But we couldn’t, it was late, and the more north we got the further in between things got too.  So we stayed there.  And I was thanking every ounce of common sense I have that I brought my own blankets.

I called my mom to check in, quickly saying, "We’re in Prince George, Bj didn’t want to make reservations, we’re probably going to get killed in our sleep at this dive," and hanging up. I’m sure that was really comforting to her. At least the soap and the towels lightened the mood. Oh the towels, you want to hear about that? So there were no towels in the bathroom, Bj went to get some, and the woman said she was sorry she forgot, and would bring some. She showed up with a stack of towels, looked Bj up and down and said, "you’re tall I bring extra." (Side note this lady was seriously way too sweet to be at this place – it’s only redeeming quality). The next morning after I showered I started chuckling, the towels didn’t even fit around me! Slightly bigger than a hand towel, but not by much.

Needless to say, we made reservations for the rest of the trip the next day.