I have a bunch of emails to answer, so if some are yours sorry! One of the emails I got was a request to go over how you spin yarn. Sure! Now just remember I’m no expert, I’ve taken a few lessons, but I still feel like I only know the basics. So basically you need a fiber and something to spin it with. I use a wheel, but there are also drop spindles, cheaper, but they look like it might take a herculean amount of hand eye coordination to figure out. I think that might be a personal problem on my part though :). So the fiber. If you go out and get some fiber straight from the sheep (or other animal) than you’ll need to clean it and line it up right (a hand or drum carder is used for this). Then you can dye it if you want (you can actually dye it before or after you line it up). Now I tried all of this, and sure you save a little bit of money going this route, but dude it’s messy and time consuming. What I have found more fun is buying super cool dyed commercial top (commercial top is all lined up right and so soft and perfect, spinning it is a breeze), like this:

So then you spin it up. Now I’m only telling you this next part because I can’t be the only person who knew so little about spinning before I tried it. I thought that the fiber went through the wheel somehow and I don’t know made yarn. But what the wheel really does is spin around once and make the flyer (the part on top) spin around in multiples, so like on the largest band the flyer will go around say four times for every once around the wheel goes, and on the little one maybe eleven times. I totally made those numbers up though, because I never count and see what it’s on I just feel for it. You can tell if it’s going to fast because you won’t be able to keep up and it will twist out of control.

A piece of leader is hooked to the bobbin, and your fiber is drafted on to that. Since the bobbin goes around and around, it starts twisting what is hooked to it (the fiber). If you just held your hand still and never let go it was just twist until it was one big twisty mess. Because it’s hard at the beginning to know how much fiber to let out this is a common first problem. The extra twisty-ness. But okay see that fluffy part up there? You want to let just enough of that in to get the right amount of twist at the right amount of thickness before it gets too twisty. It’s one of those pat your self on the head, rub your belly kind of things I think, but the first time you get it, you WILL feel like the smartest person on earth and you won’t believe you’re making yarn (well if you’re anything like me at least). So then you have a single, one single strand of fiber spun up: 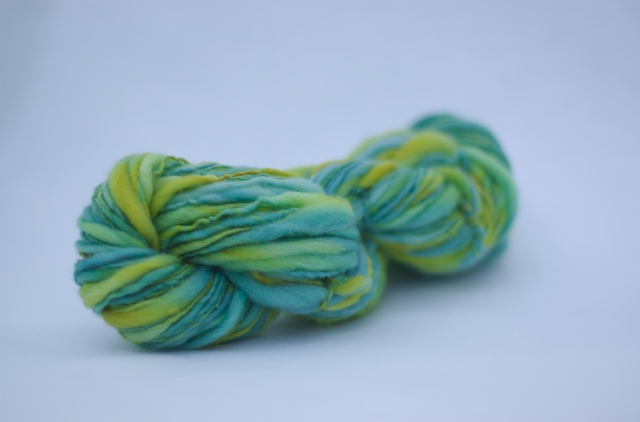 You can try and knit this (you’ll have to set the twist first, I’ll get to that), but I never have because I wasn’t very good at controlling the amount of the fluffy stuff that gets drafted so I’d have some real weak spots, and the singles couldn’t stand alone as yarn. That bit of single up there I thought could because I’ve gotten loads better since I started. But most likely you are going to ply at least two strands together. Since I spin my singles with the wheel going clockwise I have to ply with it going to other way so I don’t mess everything up. So instead of putting just fiber on the leader, now I tie the two different bobbin strands I"m going to ply together to it and start treadling the other way (that’s what it’s called when you push the peddles). I got a bigger head for this at OFFF because I was always having to cut my skeins in half and it was annoying: 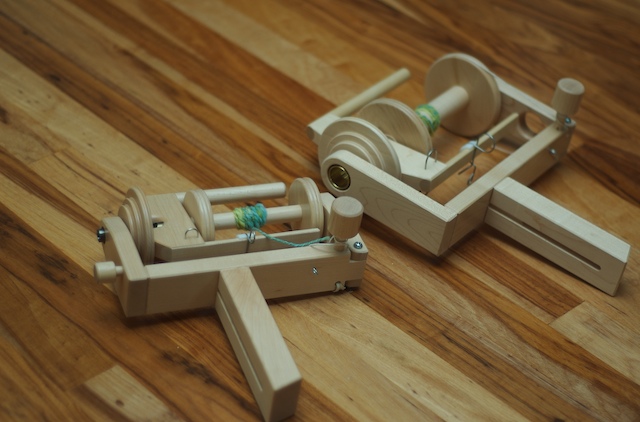 I’m telling you this because if you’re really interested than you should know these things exist, they hold a ton of yarn and are genius! Love it. So there you go you twisted to singles together and you have a 2 ply yarn! You need to soak it (in cool water and don’t agitate it because you’ll get felt): 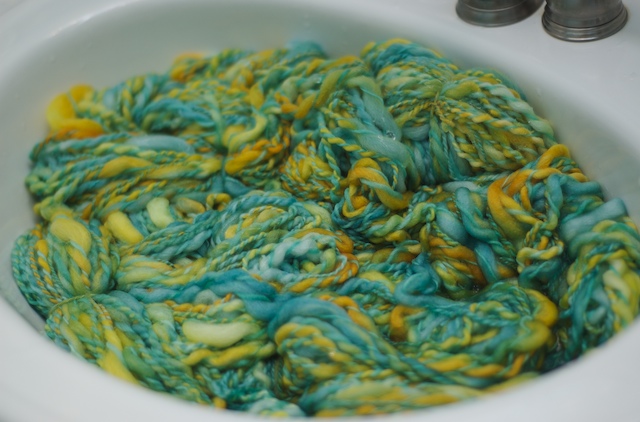 The books say you can wash it, but I don’t, just soak. Then you hang it up to dry (or use your awesome

Yarn, can you believe it? And there are other ways to ply. Like if you just have one bobbin you can do this thing called Navajo plying, it’s cool. I just tried it for the first time. It’s a cool way to make stripped yarn: 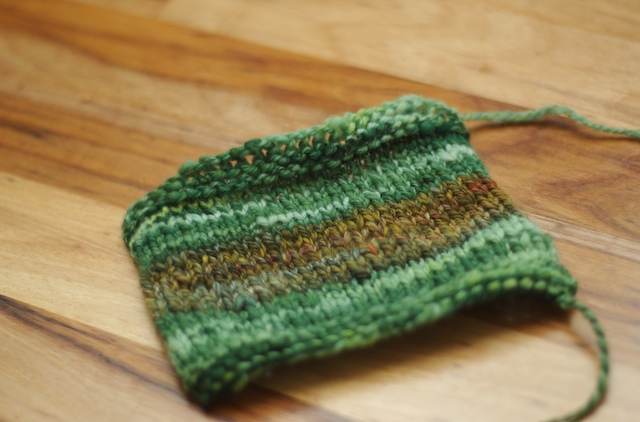 There are tons of awesome handspun yarn examples on flickr. Hello Yarn is an awesome blog, and her shop is great too.  There are wonderful hand-dyed rovings on etsy (and handspun yarn if you want to skip all the above steps). I get to go to Woodland Woolworks because I live close enough, but they have a great catalog/online shop. Sign up for the catalogs because they are like free reference books for spinning and yarn.  It’s so great to take private lessons, honestly the class I took was crap. Maybe you’ll find better where you live, but one on one was what I needed to "get it."  Any other questions?

Today I got to spend the whole day with my mother, which was so great. We shopped, met my grandma, and got to see my new baby cousin!

They let me take a bunch of photos, that
was my fav. 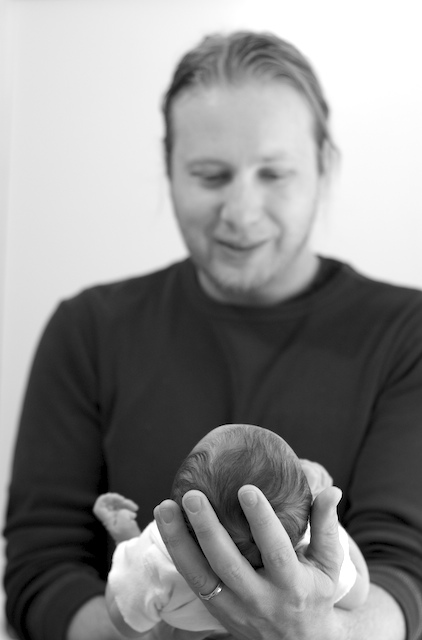 My uncle is my mom’s youngest brother. I’m almost certain this will be my last new cousin. Our youngest little member to the party. 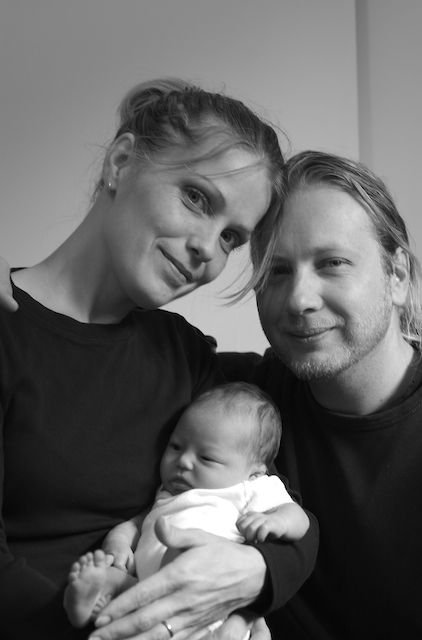