Sometimes it's the little things and this afternoon I finally got the straw that broke my back.

I had been down in the basement working when the guys came to clean up (at 3:30, not a long enough work day if you ask me). I had gotten one of them to put a second coat on the new wall down there in one spot, despite them saying that it didn't need a second coat. People paint almost always needs a second coat if you want it to look good. So the guy goes to clean out the paint tray and there is tons of paint in it and I can't see that just go to waste so I said, "give it to me" and whipped out one of my brushes. I touched up a bunch of spots that have been DRIVING ME CRAZY. Yes, I know, I shouldn't be painting. I could not help it, there was no way I was letting that paint go down the drain. So I'm working away, everyone is gone, I clean up and head upstairs to pee before finishing up with my orders. I walk right into this: 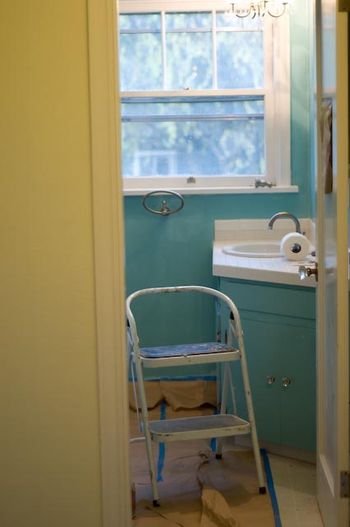 Notice anything wrong with the bathroom? Besides being super messy? Ya, it's the wrong color. The cupboards and the wall are the same color. Now mind you the painter only had to hit up one wall and patch a small section, but what does he do? He paints the whole freaking thing (minus some still taped sections. Now I ask you, how the hell do you keep painting when it is quite clearly NOT the right color? 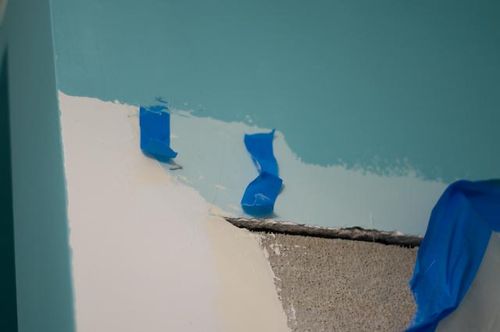 Oh and see that white section? Ya, I guess he just decided not to paint that at all. I was fuming at this point so I called the builder and was like, "this is so NOT COOL. He left it a mess, he painted it the wrong color." I had to explain why. To be fair I did give the painter the wrong color. I had a bit of the can of the old stuff and took it to the paint shop to get more. They saw the color code but not the bit underneath that said, "30% of colorbook" So I gave the painter the bit left over, told him to use it first and then the new. BUT STILL, come on, they are not even close!!!! So the builder says, "get new paint, we'll fix it tomorrow." Meanwhile I still haven't peed because I don't even want to deal with trying to clean this up.

So I start to sob, and sob, and sob, and sob some more. I call Bj and of course he doesn't answer his phone. But luckily my mom did, and though she could barely understand me until I calmed down (I was EXTREMELY worked up), she did manage to get out of me that it was a painting fiasco and said she would come tomorrow to help me. Which is awesome, because she paints so well (and not only is this painted the wrong color but it is done badly). So I called back up the builder and told him (I'll admit, through tears) that I didn't want the painter painting any more, my mom was going to do it. He said, no, no, he'd do it himself, but I refused, and told him I did not want them to paint. I want them to keep doing all the other stuff so we can get this remodel finished already (supposed to be done on Friday, so NOT going to be done).

I keep crying, because hey pregnancy hormones, why stop now? And head to the paint store, puffy faced. Luckily they know me in there, so not so horrible. I explained what they had done, and wouldn't you know it they made me a new gallon for free (I was still sniffling, so the odds were in my favor here). I picked up a large Frozen Coke from Burger King and drove the rest of the way home with it sitting on my belly wallowing. The crazy thing is I had been doing great. Just yesterday the doctor told me I was, "an above average pregnant woman with a very healthy baby that weighs about six pounds." Today I felt like a below average human being caught in some kind of experimental hidden camera show.

I did recover a bit when I got home and channeled my negative energy into a "I can do anything better than them anyway" mindset. I swept, followed that with vacuuming, and then actually got down on my hands and knees and scrubbed a big section of the Ribbon Jar floor. While I waited for all of that to dry I tore apart all the components on my desk, the cutting table, and under the ribbon racks; deep cleaned every morsel and put it back together. Then I got all the orders packed (I feel terrible but they were half done when I had to go to the paint store). I put covers on all the outlets and switches, and figured out how to get my phones plugged in again down there. Then when it was dry I got out the primmer and painted a section that my desk is supposed to sit on. I immediately cleaned up and got out of there (unfortunately unlike all the paint I'm using now, this is not low VOC).

I'm not even sure what the moral of this story is supposed to be. I mean we are going thousands of dollars over budget with this water heater fiasco, but this bathroom thing, man it did me in. And yes I had caffeine, and then inhaled paint fumes, and am probably the worst mother ever. At least I didn't try and climb on something to get the shower rod back up. So if you see me tomorrow with a three day old blow out, please give me a little pity. Hey I guess it's a good thing it will be a couple more days before I get a mirror back in the bathroom.