That was the sentence just yelled to me when I answered the phone. Yes, it was me, but not the Bonnie the super old caller was looking for. Anyway. House progress chugs along. Right now I have a couple of guys out my window working on putting in a new gas line. I'll get to why in a minute, but the thing annoying me now is that they are whistling. I do not like whistling, please if you meet me do not whistle around me. I would ask him to stop, but I've tried that with another worker and he was cold to me the whole rest of the day. So I've got my music up.

This is the water heater story. A week or so ago the plumber came to install a new water heater for us, as the 40 gallon we have now would not be able to heat three bathrooms when you include the run from our lower level all the way up to the top floor. A much bigger water heater wouldn't work because it couldn't be much taller than the water heater we have now, due to a flu issue (it has to drop at a certain grade, it's in the basement and the area it's tucked into is short, so not much room to fall). So we went with a 50 gallon that did this high BTU thing where it could re-heat the whole tank in three minutes, sounded good to me. Turns out that even though it was just a little bigger it wouldn't work. So we went back to the original plan, which was to twin up a second 40 gallon of the same size (which is now not a standard size). They would work in tandem to get us all the hot water we needed.

When I got home Tuesday from my diaper buying fun times there was a guy (that I had never seen before) up on top of a tall ladder with his head shoved into my chimney. I pulled up, got out of the car and said, "hey what's going on?" He said nothing to me, came down the chimney and went into the house. Um… So I followed him down to the lower level and said, "hey, what's going on?" They told me that the 6 inch flu liner they needed to put into the old flu (which is really just one half of the chimney, I didn't realize they it was split apart) wouldn't fit into our 6 inch flu. I asked them why they were even messing with it (our flu has been working fine), well when you go to mess with the flu at all (like connecting a new water heater) you have to bring the thing up to code (which is not terra cotta, the liner that is in there). They worked on it for hours but the terra cotta is broken, and even if it was in tact perfectly the size just would never work. Cue head explosion, what do you do then (and how expensive is the fix going to be)?

A couple of options were presented to me. I immediately ruled out electric water heater, as we'd have to get our electrical updated because our box is maxed out and couldn't handle the big water heater we need. The second option was a thing called a power vent water heater. Still gas, but it has a thing on it that forces air out the a hole instead of just I guess the gasses automatically venting out. Okay, but since this is a basement we'd have to drill a big hole in the foundation and the vent would need to come out the front of the house, and couldn't have anything cover it. I'd really love a big hole on the front of my house blowing gas out when ever I used hot water, that would be so hot. NOT.

The last option was a tankless water heater mounted outside. I have nothing against tankless water heaters, Bj, he's not such a fan. The problem is that it's not like we can just put up a tankless water heater. Because they are mostly off (and that's how they save energy), when they do come on in order to heat the water quickly and indefinitely they use a lot of gas all at once. This takes a bigger gas line. A one inch line (guess how big ours is? hint – not an inch). Plus water and electricity has to be ran there. In spite of all of that we decided to do the tankless. It is really the only viable option, and will save us money on gas bills. I've done lots of research on it now, and we're going to go with a Noritz, it has the best reviews out of everything I looked at. It seems the most important thing is calculated need/GPM and having new pipes (we do now). So I call up the plumber who is coming today to put it in and tell him that we decided on tankless and Noritz and he says, "oh that one is back ordered for two weeks."

Really that's probably boring to all of you, but I had to write it down for prosperity's sake. Like when I blogged about the ginormous disaster of having to water-proof my basement. Because now it doesn't seem so bad, my "lower level" has never had an ounce of water in it, it smells so fresh and clean, never moist, and we use every inch of the space. So this too will seem good later, and I'll need to remember that I thought it was craziness and wanted to cry that now we can't get our stroller and fun ridiculous baby things. Of course I will be able to bathe the baby in warm water, so that's good. Plus how much can I really complain, it's going to rock up there!

To make myself feel better Emilie and I made this last night: 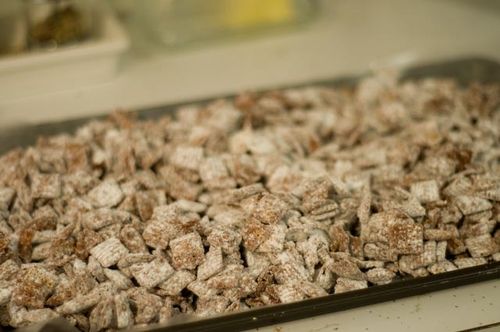 And I washed all the wipes Sciarrino and I made (okay mainly Sciarrino): 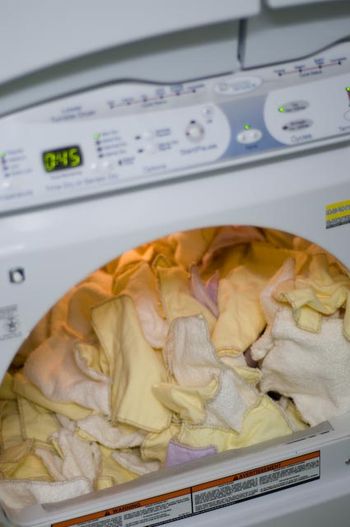 And I had the guys pop in the sink so I could see what it's going to look like in the bathroom: 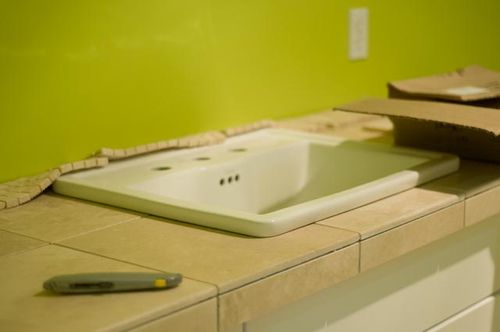 pretty awesome. Now I just realized that it's cold in here because our gas must be turned off… and those guys left without saying anything. But I can't worry about that, I'm going to get a massage. 🙂