What a clever title, no? I did get back from Vermont a week ago, yes. But then my lovely husband had a stay-cation (isn't that what they're calling it these days?), and not surprisingly the rest of the week flew by. Speaking of flying lets go back to that adventure, shall we? I left off with nachos and loveliness at Ceara's home. The next day we ventured out, and venturing out in Vermont means bundling up Tutu accordingly: 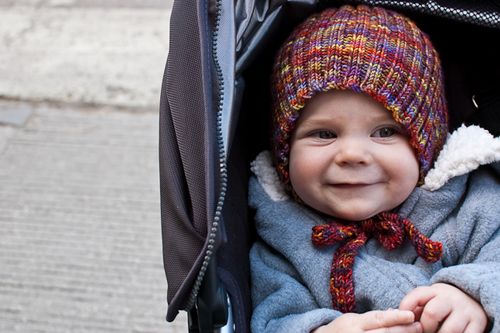 Which this mama didn't mind at all, since she is so extra cute like that. I think for a better run down of the whole weekend you should see Ceara's blog, who yes, is pregnant: 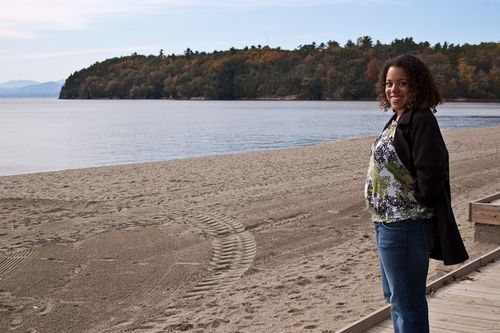 and just as cute as you'd expect. For those of you who don't know, Ceara is my BFF from way back. We became friends in middle school, but actually went to church together since we were little. Ceara and I haven't lived in the same town for ten years, and not in the same state for five! I have to admit at being a little worried about my daughter's new found stranger danger being a problem, but it was as if she's know Ceara all her little life, they were quite taken with each other: 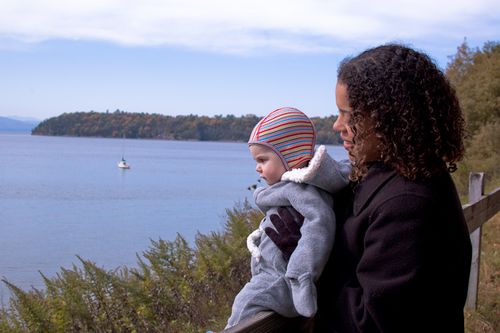 Which made the trip so easy and relaxed. We had one bad night, but considering the time difference, the flight, no papa, and all the variables, not to mention she cut two teeth the first whole day we were there, not bad!

They came in with a vengeance, and if one of you hadn't told me they could be bloody I would have thought something wrong, because her gums were bleeding most of the day. After torturing her to get this picture Ceara's friend Julie told me how to get her to open her mouth and show me in a more humane way, just tip her upside down, it works so well I'll have to get a picture like that. 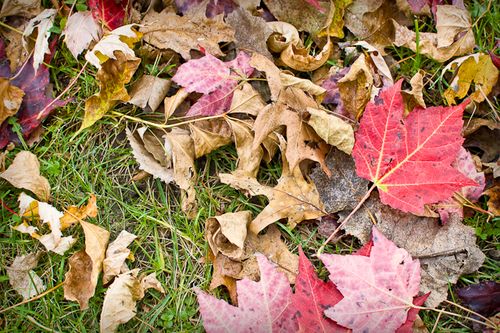 We timed our trip hoping to catch a little of the fall foliage (Tuesday loves trees so), but didn't do the best job of it. We went into Montpelier (after passing the town by eleven miles due to excessive chatter – a classic Ceara and Amber move) to see the quaint little town in all it's fall splendor, but we missed it by a week. The town was still wonderful and we happened upon a little farmer's market with yummy food and lots for Tuesday to look at. I have lots more thoughts on specific parts of our trip, like why Tuesday was so fantastic on the flights (she's logged six so far in her short lifetime), and how Ceara and I can go months without seeing each other and just pick up, like that. I think I'll save some of those for another post (which will come sooner than later, I assure you), and leave you with a favorite photo (over processed with love):