I read a bunch of blogs. Probably way to many (I’m working on cutting down my list to favorites right now!). One I read is called Ohdeedoh, an out post of Apartment Therapy. I was looking on there last spring and read a comment from a reader that said in Europe where she is from people start putting their babies on the potty when they can sit up, about 5.5 months. So the next time I placed on online order and I need to buy something else to get free shipping I got the Baby Bjorn Toilet Trainer. Bj took one look at it and our then four month old like I was crazy. I stored it under the sink and forgot about it. Then around seven months I was watching Tutu play, she stopped and I knew it was because she had to go to the bathroom. I ran her upstairs, took off her diaper and plopped her on the toilet and she went pee! For the next few months whenever I checked her and she wasn’t wet after playing for a while (or sleeping, or riding in the car), I helped her sit on the potty so she could go. I went days with out having to change a poopy diaper, which was awesome. Then she started crawling and being a lot more busy. She didn’t seem to mind being in a wet diaper like she did at the beginning so I didn’t really worry about it much. I had read somewhere that toilet training too early was bad and I didn’t want to pressure her. 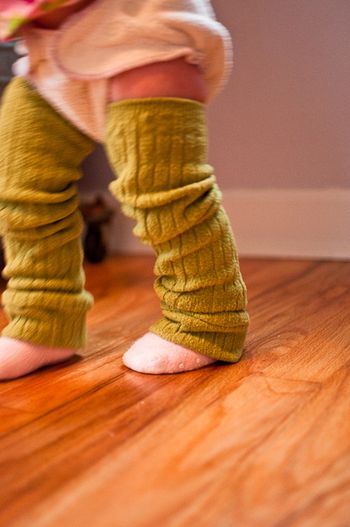 Eventually I heard about Elimination Communication (EC), but didn’t really think much of it. In fact I had heard of diaper free babies but thought it was crazy. Like CA-RAZY. Then Tuesday got a terrible blistering diaper rash. We had to use sticky creams and disposable diapers so we wouldn’t ruin our cloth. I looked up info on EC and checked this book out from the library. I figured I could give it a go again, though we are on the very late side of starting this technique. I still didn’t want to pressure her, but I now believe (as it states in this book) that we basically taught her to sit in a wet diaper, so we are not really potty training her, but UNtraining her to go in her diaper. I started by putting her in a cloth diaper with no cover and changing her as soon as she got wet, even a little bit. I started going through so many more diapers! I did not realize she sat in pee so much, yikes. 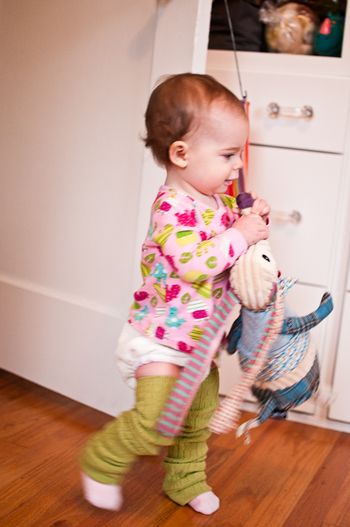 I made up some leg warmers using this great tutorial. But Miss Sparkle Pant’s legs are too skinny so I stocked up on baby legs. 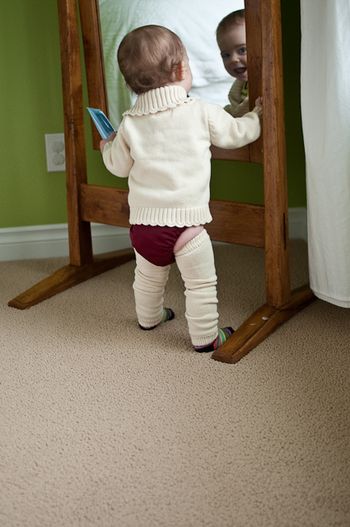 Which don’t fall down so she doesn’t slide on them. I let her run around with out a diaper when we were playing and just after she’d gone on the potty. I’m not a huge fan of cleaning up messes, but it really is no big deal. I ended up getting her some EC wear though for when she has to wear something. These little pants are great because the belt stays around the waist and the diaper part flips back. 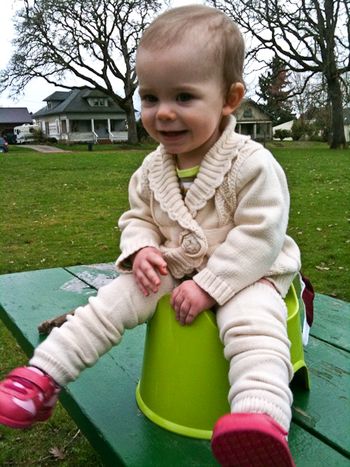 Tuesday at the park today (with her Ikea potty). Now I don’t want you to think that every time she has to go she is on the potty. In fact 9 times out of 10 she’s probably not. Because she is older I have to rely mainly on timing, by the time she shows a cue (stopping in her tracks) it’s probably too late, and she has never “told” me she has to go (by gesturing or going to her potty). But we’ve been having better and better days. And every time we go to the potty or talk about it I sign her “potty”. She just started using the “milk” sign (oh my goodness so cute) so I’m hoping she’ll catch onto the potty sign soon. If not that’s okay too. I feel a lot better about how often I change her, and the fact that I can read her so well. It really is about communication, not potty training.
I’m mainly posting this so that if someone is reading and has a younger baby (or is pregnant) they can at least have it in their head. Who knows you might become an accidental ECer too!