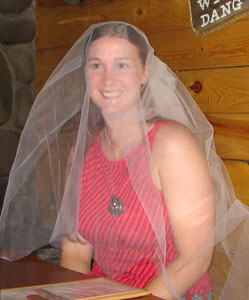 Well I survived the bridal madness! I had a lot of fun hanging out with some great friends. First up was Tracy’s bacholorette on Friday night. I picked up Tex and met up with Karen at my mom’s. It was oh so tempting to pop in the pool, but we had to head up to Aloha (near Portland). First stop was Tracy’s sister’s place to open presents and have hors d’oeuvres (why, oh why is this spelled this way!!!). Then we headed to a bar called Bushwackers for some dinner and fun. We ate, but unfortunately did not do much dancing. See we were going to take dancing lessons but it turned out to be couples night. Tex, Karen and I stayed until about ten (when Jeff showed up and crashed the party, bad fiance, bad) and then drove back. I had to get home so I could be ready for more fun the next day.

My mom woke me up (I spent the night in Salem so I didn’t have to drive all over the place) and after the customary, "mooooooom, just give me five more minuets." I got up, got ready, and came downstairs to full mom party mode. This mode equals: stripping the downstairs of anything "distracting"; i.e papers on the desk, shoes lying around, or even the crock of kitchen utensils usually on the counter. My mom was busy cleaning off every surface, which was really cute in her Juicy Couture sweats (mom, you’re the coolest!). I got to help by cutting bouquets from the backyard and arranging them in cute little vases. Gene showed up with all the food (and I mean like a ton of food), so we got to work. A couple hours later we had 35 guests and a party. The bridal shower went perfectly and Ceara got a lot of great stuff. I helped my mom clean up and went to pick Ceara up around four. We headed to Corvallis so I could get some stuff then down to Eugene with a quick stop to get Powerball tickets at 5:54 pm (talk about cutting it close!). We arrived to a very bacholorette-esque setting. Athena (the maid of honor) and Kristin (another bridesmaid) had decked out the apartment with men, food, a bar, and red tinsel. The signs were great, and very creative since Athena only subscribes to Runner’s World and Backpacker (I especially liked the runner that said, "if only I could have caught you Ceara!"). We were instructed to make construction paper penises (peni?) and cut them out. The bar opened at eight and we got to mingling.

Okay seriously people, I never drink. I don’t like alcohol to me it tastes disgusting, and I just don’t get the whole being drunk thing (and I never have been drunk). That being said… Athena makes these lemon drops which are like so fabulous. Ahhhh! I couldn’t even tell there was alcohol in there, but she swears there was. And the rim of the glass is covered in sugar, I mean, yum! Ok so then we got to play some silly and really fun games which got us all giggly. We got out our peni and stuck them to a board while blindfolded:

The bar was awesome and we had a ton of fun dancing. When we first got there it was still 20 minuets until comedy night was over, and the guy had a field day with us. When he was done he made us all get on the dance floor and get down, which of course we didn’t mind at all. Ceara completed 8 out of 10 tasks to earn her prize (which Athena and Kristen said would arrive in 7 to 10 weeks). We danced until about 1:30 and then headed back. Urmala was super hungry because she hadn’t eaten much the whole day so we stopped at Jack in the Box on the way back and when she ordered the spicy chicken sandwich I thought Ceara was going to loose it. We crashed all over the apartment and woke up about 10 the next day. The next day was so much fun too. No one wanted to leave because we never get to see Ceara. So we just sat around and ate a bunch of munchies and leftovers and talked, and talked, and talked. It was awesome, like a sleep over, and I haven’t been to one of those in forever (and I think grown ups should have more of them because they are so fun). Finally we left and Ceara headed to Salem, then Portland because her flight left super early for Little Rock this morning. I didn’t get back until five and I hadn’t showered or anything, it was great. I had two big orders for the Ribbon Jar, so that was awesome. One of them was almost all lime green ribbon, a girl after my own heart!