Bj turned 24 on Thursday and I surprised him with a trip to Long Beach, Washington. Remember when I had him fill out the

Bj wasted no time in setting up a roundhouse kick scenario (Chuck Norris was big a few weeks ago). I also knit him a washcloth ("how do I know when to wash it" um, what?) and gave him a pretty cheap hoola doll for his desk (which Ceara and I had found very amusing at the Big Lots in Jonesboro).
We walked out to the beach (right from our cottage) and took in the view before going to dinner at the depot. Seriously the food was so wicked good. Bj and I said it was the best place we have ever eaten at, EVER. And we weren’t joking. Unfortunately I didn’t get reservations early enough for us to sit at the "chef’s table." Diners there get to enjoy samplings from what ever the chef is cooking. This chef could be at the best restaurant downtown. I was so expecting over greased, over fried stuff, but no. Instead we had inventive and fresh fair, it was great.

The next day we went on a little hike in the state park at the tip of the peninsula. Chuck and Shirtless Chuck came too: 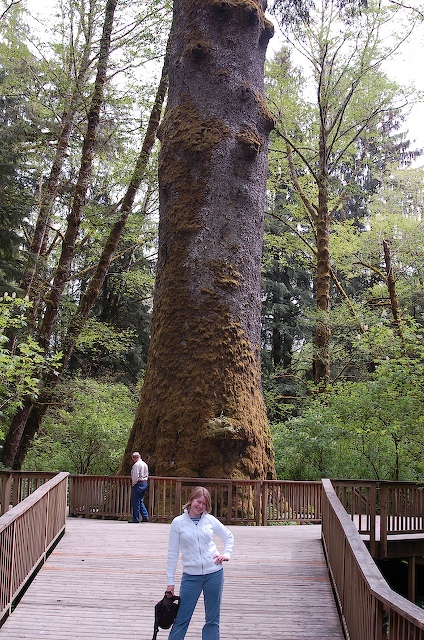 And the other big tall thing was the World’s Largest Sitka Spruce. This thing looks like it’s hangin on by a thread. I asked Bj if he thought there was a second largest sitka spruce town just waiting for this one to tip over. It was big though, I mean it’s a spruce not a redwood, it’s big for what it is.
I had to head right over to my cousin’s shop to get my hair cut before driving back to Salem to be with Nick and Lace. Great weekend.