Yesterday was the muriatic acid day. Kay, you were right, it wasn’t so scary. The scary part was the shit that came off the walls, OH MY LORD, yuck. Like black dirt, ew! I like things clean. I may be messy sometimes, but underneath the mess? Clean. So today we went at it with the drylok and it soon became clear that the four gallon buckets we bought were not going to be enough. I had to patch with a quick setting cement patch while Taylor started to paint. I look over after about a half hour and started freaking out, "Taylor! What the heck are you doing?!?!" He had flung paint all over the place and his brush… and handle were completely covered in paint. I got some drop cloths out and we went back to it. My mom showed up and like whipped through a can so I had to go get some more at Lowe’s. Now I’m all about the local guy so I don’t go to these big places that often, and let me tell you, that was my last trip to Lowe’s. I don’t know if it’s just our Lowe’s or what, but everything was in Spanish! I was like, um, am I in the twilight zone here? And then I was trying to get around these woman and said "excuse me", and they ignored me and then I said, "excuse me" again (I think I have pretty nice manors so this was in a very pleasant tone) and the lady looked at me like I was an alien. So I had to go over and move her baby carriage myself to get my cart through the aisle. Meanwhile they had just turned back to the paint chips. Argh, whatever. So I got my four more cans of drylok. I also loaded up on a thick nap roller, some dryloc caulk stuff for the intersection of the wall and the floor and three more cans of quick patch. By the time I got back my mom had already whipped through three more cans (you think I’m joking, but I’m so not) and we were putting this coat on with brushes! Don’t tell me to roll it because I looked it up everywhere and the first coat has to go on with a brush to get into all the pores of the concrete.

Anyway by about five we had finished almost everything up with the first brushed coat, and we needed more drylok. I took Taylor home, went to Home Depot, got dinner and came back. My mom and I worked for a while, then Sciarrino showed up ("hello my bestest buddy in town can you please please come help me!") to patch the holes in all the moldings around the windows and doors and everything. My mom stayed until eight and Sciarrino and I until nine. And when we left it looked like this: 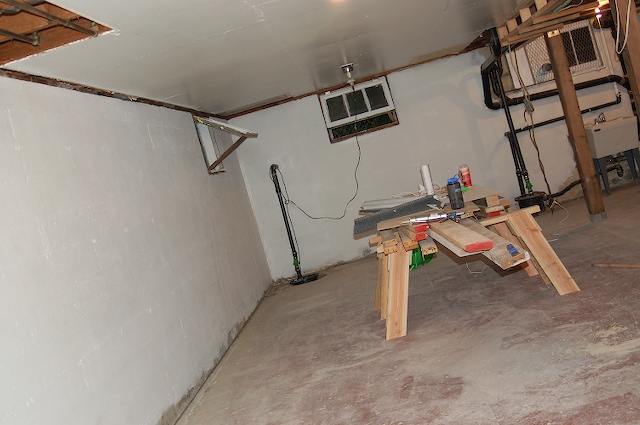 The ceilings are all going to be textured, and they will have a molding around that top bit. There is going to be a cabinet straight back to hid the mess of pipes, and the floor, well you’ll just have to wait and see. This paint makes it look so much less scary down there! And we cranked it out just in time because tomorrow I meet with the electrician. We only have one set of grounded plugs… in the whole house! Grounded plugs are the three pronged kind. Not having these is a pain. Oh, and there is only one regular plug in the whole basement. It was powering the stereo today (thanks Brent!). So more work tomorrow. I’ll take some more pictures in the daylight.