I’m still unpacking boxes of all the little stuff. I even have some more things left at my mom’s. Not a whole lot, mostly scrapbooking stuff (so hard to move), and older things, like childhood toys. I had some company this week. Little Violet and her mom.

I think I still want to paper the back of the shelves with maps, but I like how this is coming together so far. I had the electrician (the awesome Rick – who came by yesterday on his day off to fix my dryer plug) wire the phone jack upstairs into the cupboard, well on the first shelf. This is really centrally located with I think will be so nice. I’m still waiting for my baby blue princess phone that will be my house phone, but the red phone came yesterday. I had Rick do double jacks so I can have both phones upstairs and downstairs, because I don’t want to kill myself running back and forth, and since the stairs have a tread like seven inches wide that is entirely possible. I also finally found a retractable phone cord. I had no idea how hard this thing would be to find. I went to four different places, and I even checked Lowe’s because I had a return. When I got to the phone section that had lots of sinage saying "telephone accessories" the whole thing was empty. Not even one shelf. I was laughing inside. Well I finally found the thing at Target so I can now move my long calls over to the couch all retro-phone-call-style. I also got the kitchen all cute: 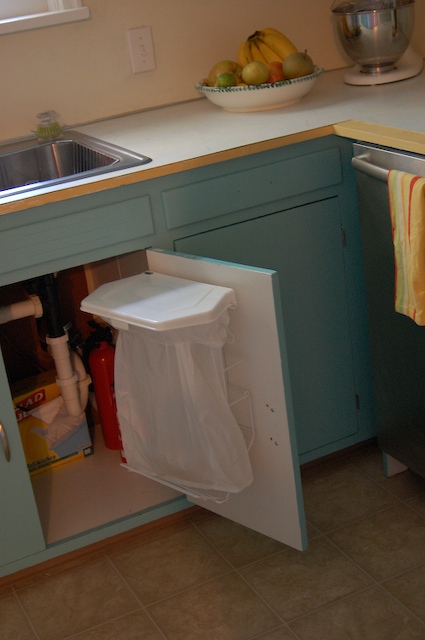 I looked everywhere for a garbage can that would fit here, but the only ones that would were like for under the bathroom sink and way too tiny for a kitchen. So I decided to give this thing a try after seeing it at Bed, Bath, and Beyond. So far two thumbs up,easy instillation, fits the space perfectly, and the bags even deodorize. It’s not that big (5 gallons), so if you generate a ton of kitchen waste it might not work, but since I like to empty after cleaning a chicken or gross stuff like that anyway it’s perfect! More unpacking of little things today, and I’m going to get the jar part of Ribbon Jar all organized so I can so you guys pictures of my super cute basement.