So I mean, come on, getting a call that your church is like no longer available is so NOT the call you want to get less than three months from your big day. My coordinator is currently on the case and it is, as of yet, unresolved. See we signed up with the church before Christmas, and a person we had never talked to at the church called us just last night to tell us there was going to be concerts there Friday and Saturday, and they couldn’t move the stuff for our wedding. That he had been on vacations, blah, blah, I started crying about right here, blah. I mean he actualy offered me another date, I’m all HELLO my wedding is like planned YO! Yes they took our money, yes we have a contract, yes we are exploring all options. So enough with that (for now).

Today was the big new arrivals thing at the rack. I’ve been wanting some thing at Nordy’s all fall, so the fact that they could be mine at tiny percentages of the original price was oh so appealing to me. I did the whole get up early and get in line thing, and while I don’t think I’ve got my black belt in shopping yet (should have went for the Juicy rack first damn it!). I did score pretty well. $123.74 later: 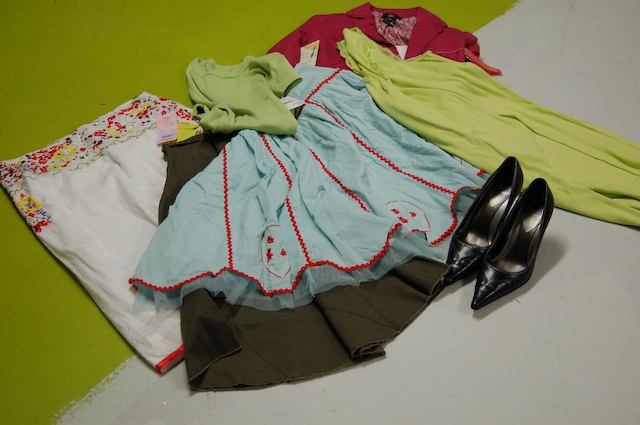 Tee shirt: 14.97, green skirt: 12.97, lime nightgown: 8.97, blue skirt: 24.97, white skirt: 19.97, pink jacket: 9.99, kick ass (and take names) shoes: 31.90.I saved $311.21 people! And I so almost bought that nightgown at full price this last summer. Possibly tacky to tell you the prices, but I would want to know if it was me on the other side. The whole point was to get things to wear to my bridal showers (yes showers plural, I felt quite honored that so many wanted to throw them for me, but we stopped at three). I think two of those skirts, and that little jacket thing could work for that purpose. And oh that blue skirt, how I love thee. It’s a size zero which is why I’m sure it wasn’t snatched up (but don’t hate me because it’s more like a size 6, I think it was mis marked or something). Anyway it’s by free people. I don’t think I’ve got anything from them before, but oh man do they have my number. Frilly, poofy, ric-rac and a jersey waistband!

So little problem. One of the things on.my.list. were more tights. I need more cool tights (and knee highs!). I wear these like all the time (despite Bj’s dislike of that whole thing "Ugh knee highs"). They look hot, no? I think he’s crazy. Anyway anyone got a source for this type of thing, preferably someplace that is doing a winter clearance? I also tried Ross, nada.

So something else to save up for? The iPhone baby. I told Bj I didn’t want one, I NEEDED one. I’ve been coveting this one for a while (I love the Ericsson I have now and despise flip phones), but come on, as one commenter said "My cell feels like a tin can with a string coming out of it now." So true. (I hope I can link that comment, is that kosher on blog world? I don’t know how to get this guy’s permission). Bj’s all, "no, no it’s too much, you don’t need it." Which is freaking hilarious because my phone (which is his old one) is on it’s last leg. And ya, okay that may be because it’s bounced in and out of puddles and such, but hey. Plus he needs every new gadget like yesterday, and he’s had every iPod since the first one (the phone is a cool hybrid). So we both watched the keynote address on our respective 23 inch monitors (geeks we are) and he just iChated me to say we’re getting them in June, SA-WEEET. The pinching thing might be the SICKEST FEATURE EVER.

So the wedding stuff is a bit draining right now, but retail therapy always helps.