This last weekend I had my first paid photography gig! I was so excited when B’s parent’s asked me to take pictures at her first birthday party (

This is going to be a really picture heavy post, as I had a hard enough time sorting through the hundreds to get down to the 125 or so I gave her parent’s. Then to edit my choices down more to the ones to show on the blog, hard!

Those little curls on the back of her neck are so sweet!

Her auntie is behind her here. I took a whole series of her here, as she was quite excited to be able to pull herself up now.

So inquisitive, this little girl, I love that.

I plopped her next to a window on top of cabinet, and got some more great light. But I did use a little bounce fill on some of these (bounced off the ceiling, I really don’t use that flash any other way).

sneak attack. I didn’t pull down many of her mom for the blog, but she told me last night to not let her get out of being in the pictures next time. That’s what I like to hear. Michele is the same way (not wanting to be in the pictures), but tends to like them when she is.

I made her a little birthday hat (like I did for

"um what is this stuff?" Good thing I had all these pictures to take because somehow I managed to stick to grapes for sweets. Yummy!

Her cousins CRACKED ME UP! This girl was so sweet, and loves little B.

Her brother dove in front of the camera when I was setting up a group shot. Luckily I had my wide angle on, so even though he is inches in front of the lens I got him. His sister is just all calm and smiley. This is a one in a million lucky capture shot I think.

I took a bunch of photos in their entry way of differnt groups of people, but the outtakes are my favorite. I can imagine that B will love them when she is older, asking, "who is that crazy? what were they doing?" And yes that’s my sister cracking up across the front of the frame. And lastly: 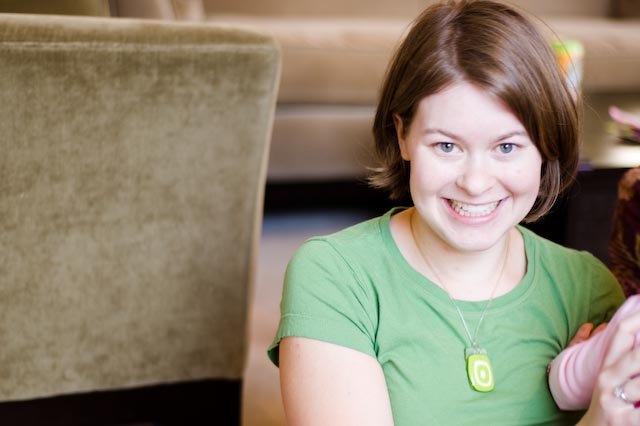 I was trying to get one of the other cousin’s to relax a little and told her she could take a picture of me in return for me taking one of her. I got all the settings worked out and told her to look through it and when she saw something she liked just push the silver button. Hello! One of my favorite picture of me ever taken… and she’s just five!

So in conclusion, I loved shooting a birthday. I was a bit nervous about getting enough actual portrait type photos of B, but it worked out perfect to go a little early, and then I just followed her around really. B’s mom loved that she didn’t have to tote around a camera. And I did get to take some great family shots too. If you want to take group photos at an event like this the wide angle is a must! You can rarely find an area in a house big enough for a dozen people with out lots of distracting elements in it, but with a wide angle entry ways, porches, and couches work great. The only thing is the light issue. f4 is not a huge opening, so you have to have some good light (this house has great light) and even then a flash or reflector (which I don’t really know how to use yet). I might get one of those to add to my arsenal, as well as a sort of cover for my flash so I can point it at people (right now it is definitely too blinding to do that).

And a special thanks to Bj who went with me. He helped get B to giggle at the right moments, and cleared off some of the memory cards onto the laptop when I decided to take more than the 270 my cards can hold (RAW). You’re the best love!!!