Okay first off, I’m still looking for that paper (locally, I have one quarter of a sheet coming from far away, thanks Isabel!). I went to a couple of scrapbooking shops yesterday and got a back up sheet that is close. I don’t think anyone will flog me for having such a small difference, but I want to try and get them to match. So other than jar nonsense and ribbon goodness I haven’t been doing much. This is my first free bit of time in days, and I’m just getting caught up on emails. I will learn my lesson someday, and hopefully then I’ll better pace myself. While I spend most of the last few days sending out packages of happiness, I received one today as well. 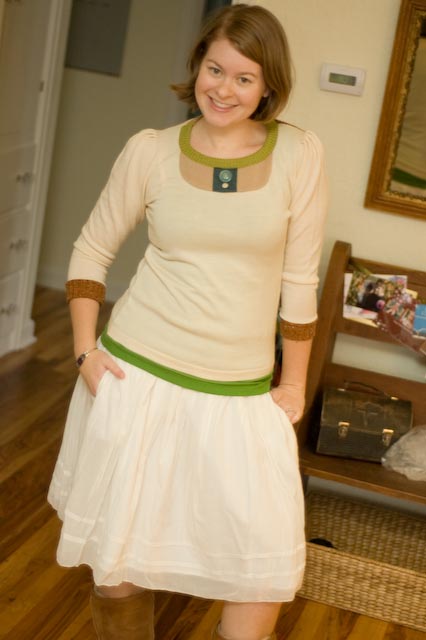 I got this fabulous sweater over at anti-factory from Stephanie. Oh what you haven’t been over there? Go now, sign up for her newsletter and revel in her awesomeness. She has some serious skills, the thing is put together beautifully. You can still see it here (at least for now). I think I need to rethink putting a green tank under, but oh well. As you can see from above my waist has completely disapeared, boo. I do not understand I am eating so well, drinking craploads of water, and counting calories, but have I lost a single pound, um no. Me thinks I might have to work out (noooooooooooooooooooooooooooooooooo!!!!!!!!!!!!!!!!!!).

Now for those grandpa stories I’ve been promising you. We’ll start with the ha ha and end with the awe sweet one, K?

We were sitting at the doctor’s office last week awaiting pro-time results. I was flipping through a magazine that has been sitting out for months and probably is loaded with germs, and grandpa taps me on the shoulder. I look over at him, he looks me up and down and says, "where do you buy your clothes?" I was wearing purple tights, a black jersey skirt, a turquoise tee shirt, a black and white stripped hoodie, and black clogs. On top of that I had a longer lighter purple wool jacket and a scarf/hat set I knit out of bulky lime yarn, and some cool nubbly multi colored stuff (that included purple, so it did match).
Me: "why?"
Grandpa: "purple socks?"
Me: "Actually they are tights."
Grandpa: "I just don’t get it purple socks, with all these colors."
Me (louder): "they’re tights grandpa."
Grandpa: "what does that mean?"
Me: "they go all the way up."
Grandpa: "Don’t you own any pantyhose?
Me: "yes, I wear those when I go out."
Grandpa: "hmm. I just never see this look advertised."

LOL like, what? advertised? I’ve never seen the guy pick up a fashion mag. I told him I was unique that’s why, but it totally cracked me up. By the way he was wearing too short joggins (sweat pants) with a zipper I sewed in because he was having problems getting them off fast enough to pee, orthapedic shoes, and a big plaid housecoat thing. When I told him I’d never seen that look advertised he said it was because it was old. Then later when I was taking him back he told me he wished he would have had a girl. I said, "you have me" and did a little twirl. He got a kick out of that.

The other story is from another doctor day (there really isn’t all that much wrong with grandpa except he’s old and in the "maintenance" period of his life). After I always go get him something to eat that is a little fattening, since he weighs less than me and is much taller. He was sick of sandwiches (burgers) so I suggested Taco Bell. As we were sitting in line I turned up my music and apologize came on (not a shock I could listen to it on repeat – hey I’m listening to it now!). Side note: grandpa does not like any music from this century. He does not understand what anyone is saying. So I’ve put on my favorite classical stuff (Romeo and Juliet by Prokofiev) and he said he didn’t like classical music. So I went back to listening to what ever I wanted, as it doesn’t seem he can be pleased in this area. Anyway I’m sitting there dancing around to Apologize and grandpa says, "do you like to dance."
Me: "yes I was on dance team in high school."
Grandpa: "does Bj dance with you?"
Me: "oh, like going out, no we don’t really do that."
Grandpa: "I lived for Fridays."
Me (surprised): "Really, you went out to bars and danced?"
Grandpa: "Yes every Friday."
Me: "But you were married really young right? Didn’t June care?"
Grandpa: "I took her with me! We went everywhere together."
Grandpa turns quite and mumbles: "It’s a damn shame."
Me: "what is grandpa?"
Grandpa: "That she died when she did…. she was my personality."

Awwwwwwwe come one, how sweet is that? Totally sweet, and I’m thinking quite true, as he’s not keen on making new friends now, but their photo albums are filled with parties and get togethers. So those are my stories for now. I might have some more after Friday. Grandpa is now doing physical therapy (that was my doing thank you very much), and I have to go to the appointment. Grandpa doesn’t want to be left alone to have to "listen to all kinds of chit chat."