This weekend Bj and I headed up to Zig Zag (on the way up to Government Camp/Mt. Hood). Can you even believe I’ve never been up there before? Maybe my parent’s took me when I was small, but I don’t remember. We always had a cabin at Black Butte, so we went that direction (east) instead. We were going to camp out at Tex and Martin’s cool cabin the Bon Fir. I told them I would "link it like it’s hot" because they rent this awesome place. They have a beautiful cabin, and a bunch of us old crew girls went to camp out in their big backyard. I wish I had all of the pictures:

Like the ones they are looking at. But they are on Reid’s camera. I was wearing a truly hideous sweater (made by my own hand no less) so maybe that’s what they were laughing at. We all were supposed to wear old sweaters, but mine was especially bulky (size of yarn super ultra SUV chunky weight), so pretty funny. We were also kept toasty by Martin’s careful fire-tending: 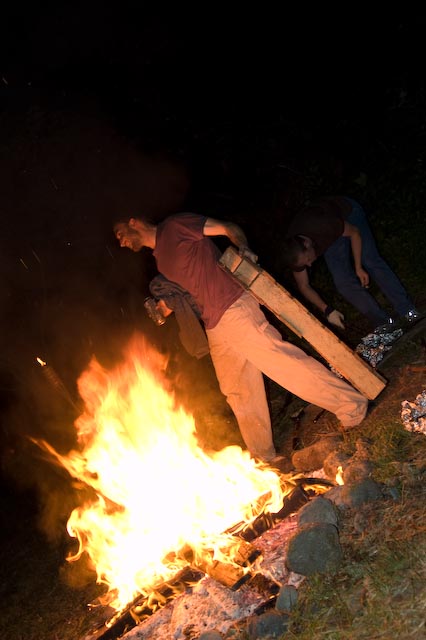 Hauling around pallets while still holding the Busch, impressive. We circled up and played electronic catch phrase (perfect for campfires because the words light up). During the day we laid in the sun, went down to the way to swift river to look at it (not swim and risk death), and ate. We did that around the campfire too. 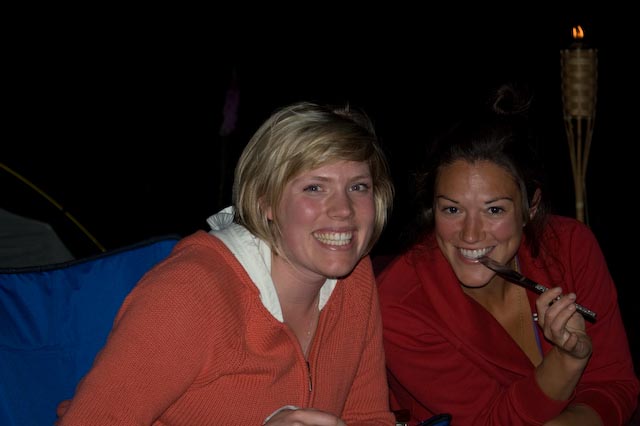 I think Tex was dipping into the nutella 🙂 I made my favorite camping dish: hobo stew. All you have to do is chop up potatoes (I used Yukon gold), onions (walla walla sweet – yummy), carrots, and celery. Sprinkle with Johnny’s and add a little water. Fold together in a double wrapped foil packet. Put on coals and pile fire on top. About 45 minuets later you have dinner. Yummy, yummy dinner. It had been a while since we’d been camping, and I got all squealy in the tent. Squealy excited I mean. I love camping. And every time we get in our little two person tent it reminds me of that monster road trip after college, 10,548 miles around the USA. The only difference was this time I had to poke Bj to wake up want walk with me up to the cabin to go to the bathroom. "bbbbbbbbjjjjjjjjj I have to go to the bathroom. I can’t hold it. Wake up, I don’t want to walk there in the dark. Bj, bj, bj, bj." hehehe. He was pretty nice to take me considering it was 3:45am. If you don’t have ten people staying, you could all be indoors and not have to worry about that. Did I mention their awesome cabin is for rent?!?!?

Now I’m currently working on a spreadsheet… on strollers. I am determined to do the most research and have the best one out there that will fit a tall person and a shortie. It will look cool, it will have a bassinet, and it will have a five point harness damn it! Oh and I hope to be able to pick it up and stuff it into the car. Wish me luck.