Yes, it's good to be home, no matter how much of a disaster home is right now. Bj and I got home very early on Saturday morning from a trip down to California. We went down to take grandpa's remains to rest with his wife at Riverside National Cemetery. It was sad, as I knew it would be. But luckily we were not alone. Grandpa's two nieces and one of their sons joined us for the ceremony. It was a very short affair, as somehow the honor guard did not get scheduled. I felt horrible about this since grandpa had written down quite a few places that he just wanted taps to be played (he qualified for gun salutes and a fly-by but didn't want it). They did play a recording of taps and Bj's 3rd cousin (?) helped fold up the flag which was presented to Bj. Bj said a few words and that was that. Then we went out to a late lunch with his relatives: 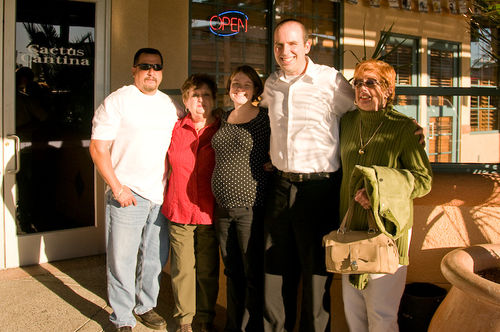 Bj has relatives on his dad's side! This was a first meeting for all of us. I found them to be very nice and it was interesting to hear what they remembered about grandpa.

We spent the rest of that day resting before meeting up with Bj's cousin (on his mother's side) for dinner. It was so much fun to hang out with them, and I felt so grateful for other family down in the area. Plus a 2 year old second cousin is quite the treat after dealing with sadness. I think children this age only know happiness: "I play at Gymboree! I have dollies! That color is pink!" That plus fresh guacamole, yum! We were also able to meet my dad, Kim and Emilie the next day for dinner, as they were down at their California home. Saturday was an early flight, but despite all my fears, it went well. I did as my midwife said and drank tons of water. I had to hurry back as a dear friend of mine was having a bridal shower that I could not miss. 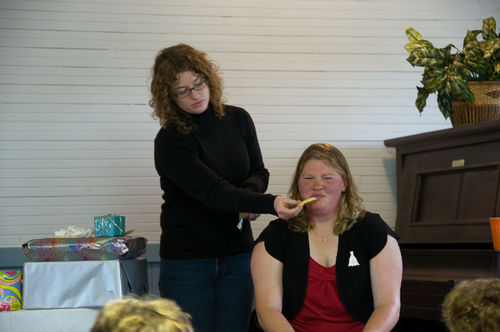 Kathy was tortured in all the normal ways. Here she is getting fed a stick of gum after missing a question about her fiance. I had to play this game at one of mine, and I can tell you it's much more fun to watch! She was a great sport though: 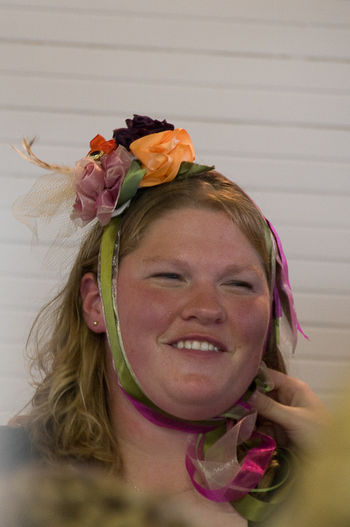 And super cute of course, as all brides tend to be when in love. Her wedding is a few weeks after my due date, so I'm working on being supportive now. I'm guessing I'm a mess in January! Better get the gift now. Lots of the crew girls were there and I actually got some good pictures: 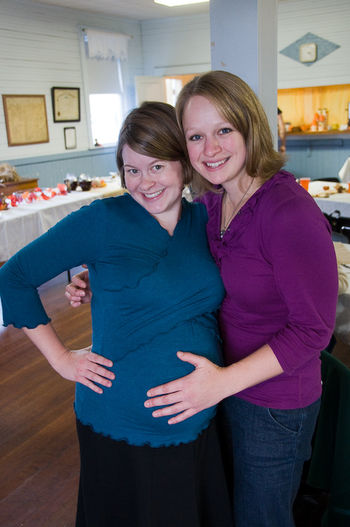 Baby and Sciarrino (yes the belly touching is a rare thing, don't try it, I might bite you!). Proof to the baby that Sciarrino was always around and so lovely to us. 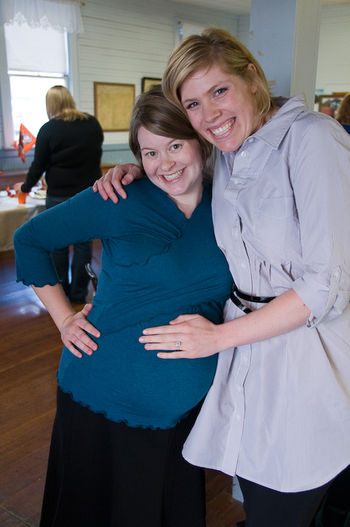 When this girl gets married next summer there will be four little babies at her wedding, crazy! We'll try to keep them quite Kristen!

While we were gone our house was still being worked on. In fact I insisted that they do a few of the really noisy messy things, like this: 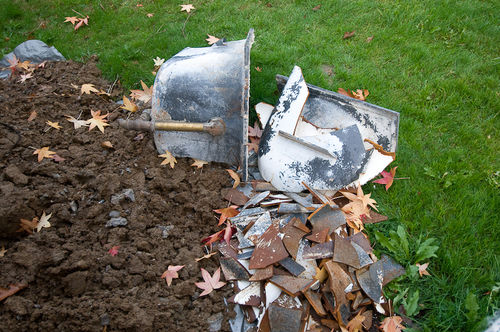 Removal of old tub. He said they might have to break it to remove it. I would call this broken all right. Good riddance to cold baths! You never did me right tub, never. Behold our new tub: 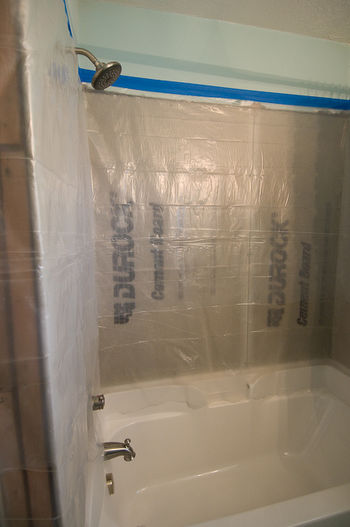 And more importantly to Bj, our new shower head that is above his head. Our old one came to his chest (I had to bend to fit under it, and I'm short). It was funny (to me), but so annoying for him. This is covered in plastic so we can use it. It won't be tiled until one of the new bathrooms is functional. Tile has to set for a week or so before getting wet, and we don't want to be without that long. I took a bath in here this morning. It's still short, but it was warm. And I was comfortable enough to soak for an hour with out even realizing it. Added bonus? Bye bye constant leak. Of course the real progress continues upstairs, so let me take you on a tour. 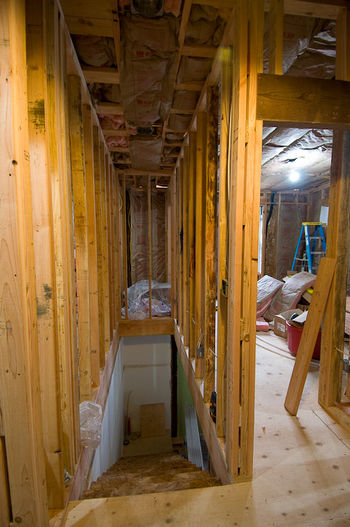 Stairs that come up through our old bedroom (the back bedroom) and up into the new second floor landing. This tall "entry" was a weird space to try and find a fixture for so we went with a set of can lights. To the right you can see the kid's bedroom door. Behind the stairs is it's closet. To the right of this is the kid's bathroom: 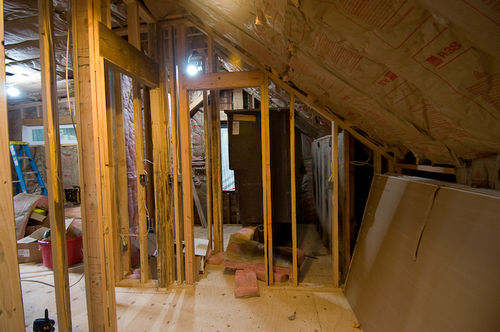 The tub/shower is not set yet, it will be pushed to the left and the short wall has the vanity and sink. The toilet is tucked into a little nook, much like downstairs. In fact this is right above the downstairs bathroom. The landing opens up to my favorite part: 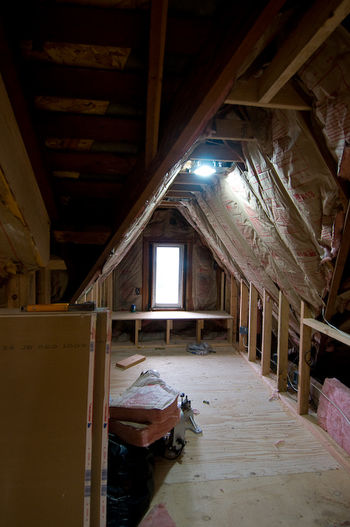 It's our alcove! If you look out this window (on a really clear day) you can see Mt. Jefferson. The nook is tiny, six feet wide and just tall enough for Bj (6' 6" I think) at the highest point. The window seat will have two little cupboards in the middle. And then we'll have built in bookshelves on each side. We already have a fabulous rug to go right here and I can picture sitting there with baby when I close my eyes. I can't wait. To either side of this are attic voids that we'll use for storage: 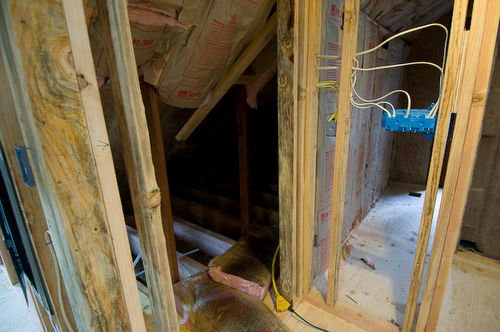 They will be decked and have cupboard doors for access. I had plug ins put in there, so I'll string up Christmas lights or something to be able to see in. My mom has a couple of these and she covered the insulation with oilcloth, I think I'll do that too. The other side of the upstairs is our master suite. 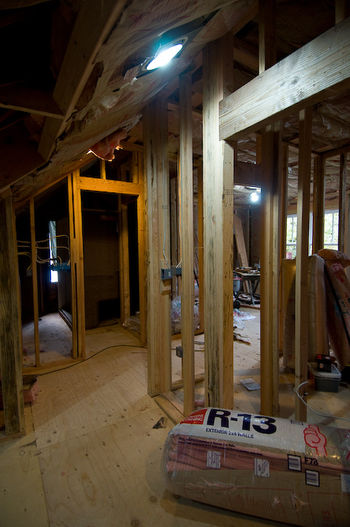 Oh and in the hallway there is a linen closet. So that slanted opening will have a slightly shorter door than normal. That door leads to a little hallway. The hallway goes back to the bedroom area, with separate doors to the bathroom (you can see the shower there, it needs to be set). I'm excited for the bathroom but the one thing that I'll miss is a big soaking tub, there just wasn't room for one. So instead we got a big shower, with a seat for shaving. Not that I can shave right now with this belly, but I figure I"ll want to some day in the future :). The other door goes to our walk in closet. Right now our clothes are on a bar that keeps falling apart, so it will be quite the upgrade. Behind the closet in the bedroom is a nook: 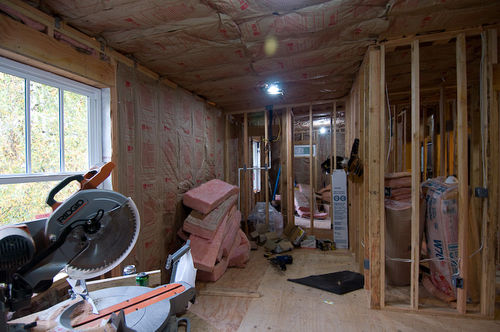 We are going to put baby there for the first little bit. It's bigger than I thought it would seem. Big enough for a cradle and changing table at least.

So I'm showing you these pictures now, because after our insulation inspection tomorrow they should be rocking and rolling on the sheetrock. Then it will really look like rooms. It's already so much warmer having the insulation up. It should be four weeks until it's finished up there (and in the living room, and the basement). And after that the siding and porch will be done. I dream about cleaning, I can not wait until I can really clean this place. The dust is the most annoying thing in my universe right now!