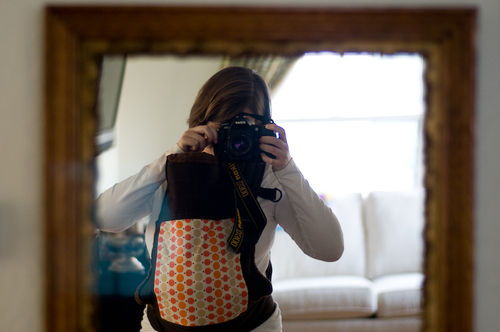 Tuesday is briefly letting me off the hook, I just laid her down (about 15 minutes ago so she should be ready to hang out again any second now… just kidding I've got Enya blasting). I have a sure fire way to get her to conk out, if ever so briefly: swaddle her, plop her in the Baby Hawk, run and up down the stairs a few times (both sets), grab any bit of laundry I can find to justify doing another load, and start some up downstairs. Then all I have to do is narrate what I'm doing, "ooh Tuesday these are papa's boxers, they have palm trees on them. These are mama's underwear, I'm still wearing my maternity underwear. Oh look this is Tuesday's, it's your little monkey socks." Eventually she listens to me and calms down. Bj's thing is this weird chugga-chugga-choo-choo dance he does with her (note to self: must get on camera). Every time he does it he says, "I swear this always works!" Usually we only have a couple times we need to get her to calm down but she's a bit off kilter today. Not her fault. Bj had a meeting in Seattle, and his flight left at seven. His alarm went off at 4ish and I had just finished feeding Tuesday so I said, "oh quick turn it off I don't want to wake her." But she started to squirm anyway. I asked him to go change her, and he said "sure." Then the three of us feel asleep again. He woke himself up at 5:30 and the airport is an about an hour away. He made it to the gate just as they were closing the doors, but made the next flight (it's a shuttle so it goes often) so no problem. But I was so worried thinking about him driving too fast to make the flight I never really settled back down and I think Tuesday picked up on it. I nursed her a couple more times but she never really got back to full sleep mode. Finally at nine she was like, "no more cuddling mom get up! We have a day to conquer!" So we did.

First up: trying to find a sweater for this button (OMG – switch that and reverse it, I guess I'm a little tired still today) so I can mark it as complete on Ravelry (I love doing that). 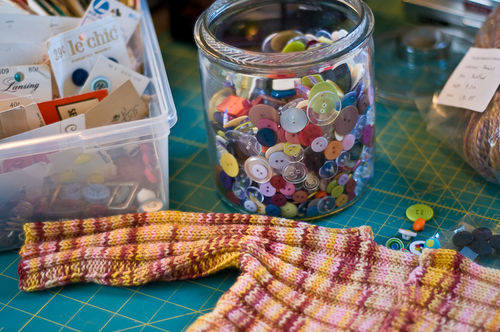 Nothing is working quite right. When I do get a button on here I'm going to make some notes on the pattern on Rav because I think the button hole side should be reversed, and have issues with the arm decreases a bit, mainly because I made them longer so I could cuff them, and that messed up where they landed.

Yesterday I finally put some handknit socks on her: 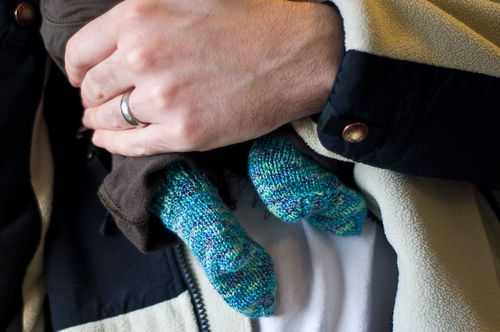 Looks like I waited a little too long, she is growing so fast! I have one of my favorite outfits on her today, and it is definitely the last time, I could barely snap the bodysuit. Time to go through more of V's stash of clothes, whoo hoo!

*side note: if anyone knows where to get teeny tiny tights could you let me know? I have some dresses for her, but can't seem to find any tights her size.

Now the totally ridiculous thing I knit her: 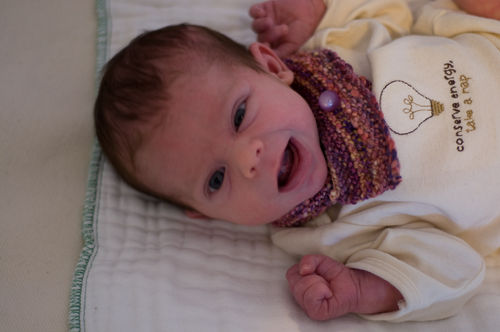 It's a mini baby scarf! Hehehe. I made five button holes on one side so that I can tighten or loosen it around her scrawny little adorable neck. See Bj likes to have her in the Baby Hawk for our walks and her neck always looks so exposed. I had a tiny little mini skein of handspun and whipped this up. It's so tiny: 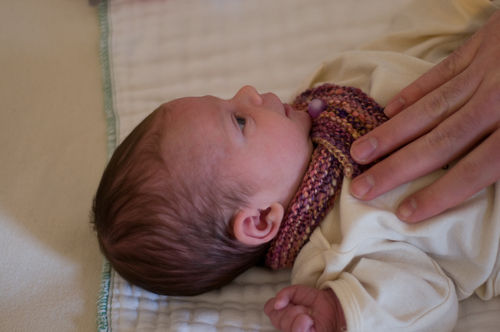 (with Bj's hand for scale). It totally cracked us up, but she seems to like it, so I think it's doing the trick. I haven't cast on an actual project yet, I keep meaning too when she's "down" but I never seem to get the time. I guess I could do that instead of blogging, but then I'd never remember this stuff later!