As you saw we had an uneventful flight to Honolulu and landed midday here. We took a shuttle to our hotel, which took a while and only had a little time to freshen up and unpack before we got to meet up with Taro and his lovely bride, Hanea. They were so sweet and got a rental car with a baby seat in it for Tutu. Taro is all about good food and good company so we planned to cook the first night. I was all set to make potato corn chowder, something Taro remembered from living with me (all through college). I was afraid maybe it was built up a little too much in his head, but I cooked it with only a little change; adding some edemame and a little milk. It went over great and in addition to Sciarrino, Hanea, Taro and I his parents and brother, her parents and another college classmate of ours Rei, joined us. We couldn't stay the as late as everyone else because of the time change (they are two hours behind west coast time) and we were all tired.

The next day (yesterday) was the big day! 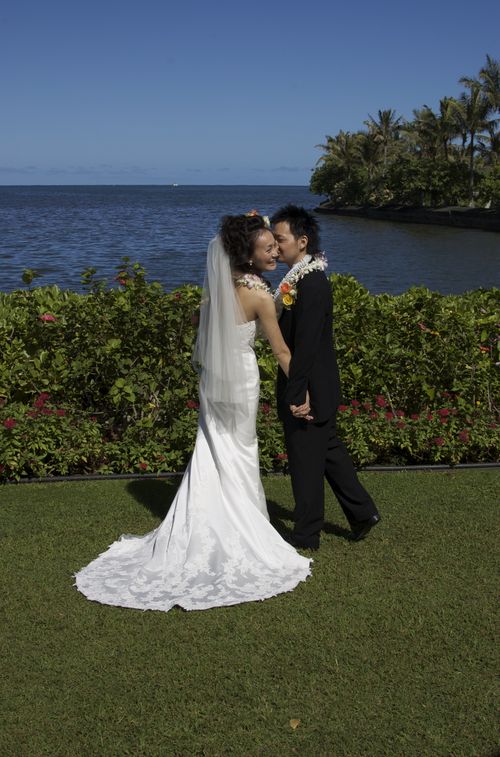 (my photos might be a little wonky, I have a little computer here and I can't format them the way I usually do).

The wedding was all coordinated and we drove out to this beautiful chapel together in a van (I think their were 14 guests, or 14 guests and baby 🙂 The ceremony was mostly in Japanese, and hearing a lot of Japanese these last view days makes me wish I would have had Taro teach me more when we lived together. I took three years in high school, so some things sound familiar, but my working knowledge is like "excuse me" and some counting. Most of the day was the ceremony and pictures. I didn't get that many, because someone didn't like the grass: 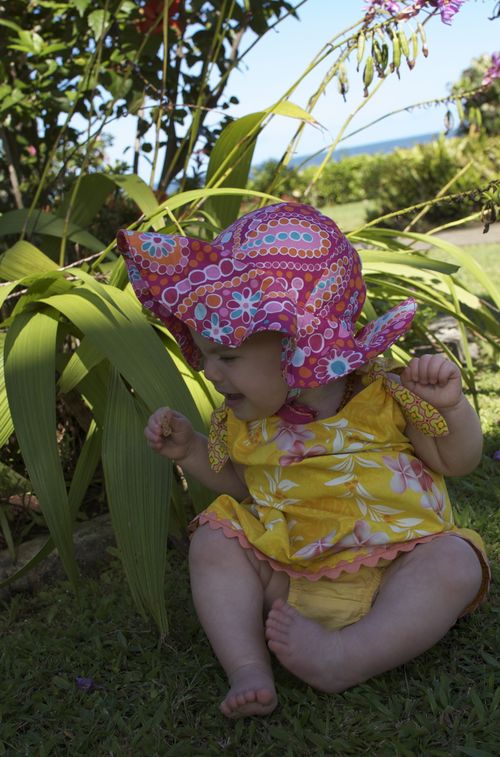 It was a little pokey. I have a feeling some better shots were taken (and hopefully a few more of this dress I made especially for the wedding): 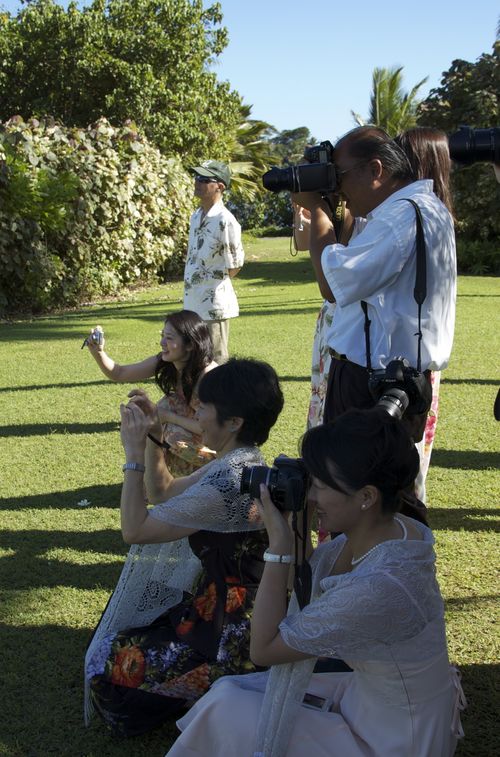 The paparazzi as the wedding planner was calling us. It was funny after a bit at the beginning she came over to Sciarrino and I and asked if we understood the Japanese, we're like, "um, no." So then she would come over and whisper directions to us in english after giving announcements. I told Taro I didn't think it was common for a couple of Americans to be hanging out with an all Japanese group like this one, and he agreed. Oh and speaking of cultural differences the cutest thing happened while we were waiting for the van. Sciarrino and I had walked from our hotel (about a mile), with Tutu in the stroller and I figured it would be best to feed her right before we joined the group. I had looked up online what the Japanese customs were on breastfeeding, not that I wouldn't do it, but to be respectful of their feelings, and the results I got from Google were not that positive. One of the comments I read said, "You wouldn't pull a penis out in public, so why is a breast ok?" OH MY GOD. So I was a bit weary of someone saying something to me. But the only place to feed her was on a pretty public bench in the middle of a shopping area because the waiting area for the van was too full of exhaust fumes. This young Japanese woman ended up sitting next to me and then her friend joined and realized I was feeding her (I'm pretty discrete, I think most people would guess she was asleep). She peeked down at Tutu and said, "kawaii!!!" (cute) and just very gingerly touched her hair. I was so happy she thought it was cute, and Tutu gave her a little milky smile. I hope that means attitudes are changing towards breastfeeding? Or maybe the sites I found were not really representative of the young Japanese?

Back to the run down. We came back to the hotel where I was able to get Tuesday to take a little rest (she also took a brief nap in the van on the way back). Then we were picked up for dinner at Ruth Chris. We had a private dining room for our party and I have to say it was probably one of the best meals of my life. Our fork was brought to us chilled for the salad, how cool is that? I'm totally doing that at my next dinner party. Taro presented us with gifts, which I'll take pictures of when we get back. Hanea had already given her guests theirs (this is a custom in Japan), and three of her friends are fellow flight attendants. When she told the table what she had gotten them they all stuck out their wrists at the same time to show off little gold chains. When they looked at Tutu earlier they all said, "Kawaii!!!" together at the same time. They are always in unison, it is so cute. Everyone was so sweet to Sciarrino and I, telling us what they were saying if someone told a joke or something in Japanese. And we were giving spots of honor at the head of the table by Taro, as was Rei, so it was great to catch up. When we first got to the restaurant I asked for a high chair and the waiter said he didn't know if Tuesday would fit, he'd never seen a baby so small in the chair (we are using disposable diapers here and she does look extra tiny, back to 3 month size pants!). When we left (over three hours later) he remarked how well she did. And although we didn't leave until well after ten and she did get a little vocal at times, she did do really well. Thanks to teething biscuits and lots of attention. I think I am going to have super strong arms after this trip, I am holding and juggling her constantly. It's nice to come back to the clean hotel room so she can crawl a little.

Today Taro, Rei, Sciarrino, Tuesday and I had our adventure day. The three other adults went for a run early this morning at 6:30, I was still trying to get a little sleep (oh that and I don't run). Then Sciarrino, Tutu and I had breakfast and met back up with the boys at ten. We headed to Diamond head to hike up the crater (750 feet high). Not a very tough walk, but I got quite winded with Tuesday in the Baby Hawk (I'm borrowing my friend's since mine has fuzzy inside), and hot muggy weather. We did it though: 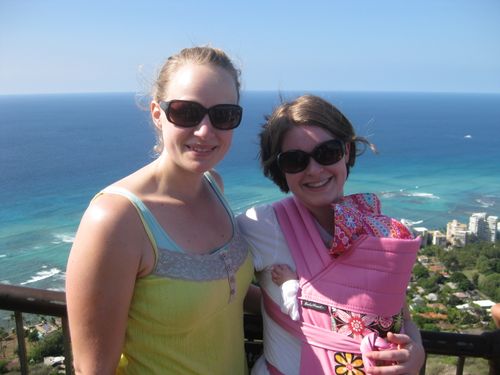 Sciarrino had very fair eyes so even with sunglasses it was hard for her to look at the camera. I picked mine up at the ABC store but they look pretty cute! Tuesday slept all the way up and back (maybe an hour and fifteen?). I had her fully covered, even with baby sunglasses on (promise to share a picture when I get them they were so cute!). Halfway up I got her head and feet (socks) wet and she stayed pretty cool the whole time. I was sweating something pretty bad though! I made Taro do the hang loose sign: 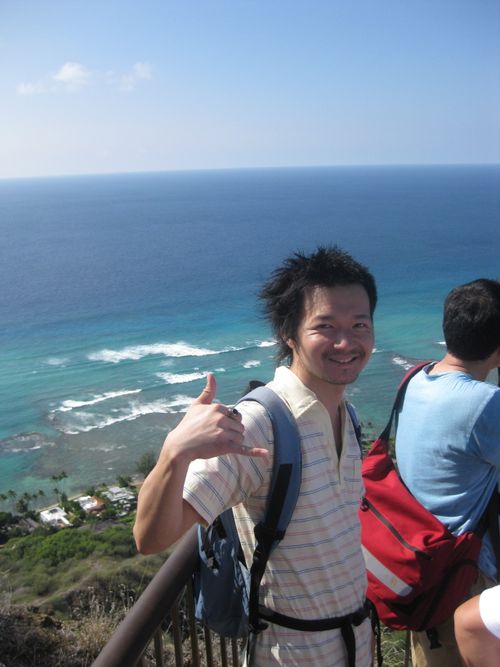 I just felt such a sense of accomplishment doing this hike! I am so glad Tuesday and I go on so many walks, and while I may not look or weigh exactly what I did pre-pregnancy I feel very strong and fit. I'm sure the rest will catch up.

We stopped to pick up snorkel gear (not me) and then went to Hanalua (sp?) bay. Bj and I tried to go their with Carmen and Andrew last time we were in Hawaii, but it was full. The weather was a bit overcast by this time and there were not that many people, it was so nice and calm. While the three others went out with the gear I laid on a beach blanket and nursed Tutu to sleep. It was such a calm peaceful thing, I don't think I will ever forget it. I got a little time to knit and relax while she slept, but soon she was up and we were on the road again. After a bit of traffic and a few stops we were back at Taro's room (his has a kitchen) and cooking up nachos to watch the big game (Oregon State Beavers vs. Oregon Ducks in a civil war, the winner of which goes to the Rose Bowl. Taro, Rei, Sciarrino and I went to Oregon State). Tuesday and I couldn't make it to the end (no problem since it turns out they lost – Ceara I know, I know, go ahead and gloat). When we got down to the lobby I realized it was raining buckets. We made it back to the room, I got her to sleep and paid for this slow internet ($13.65 – it should be much faster) and here we are. Tomorrow Taro is cooking me one of my favorite breakfasts of all time. I don't know what it's called but it has egg, rice and lots of ketchup, yum!