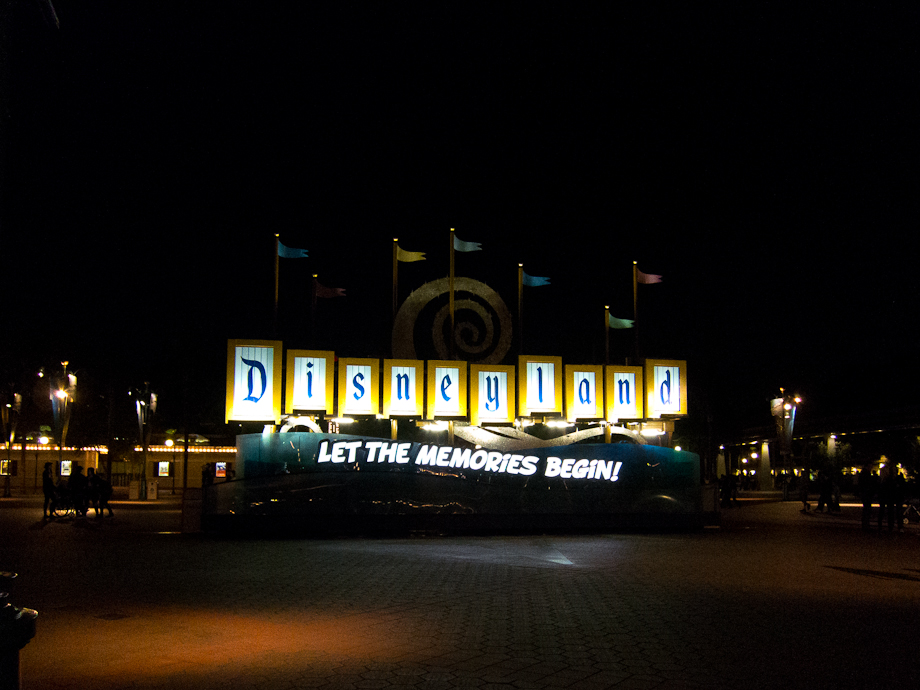 Oh my goodness me. Well Disneyland was nothing like the easy, fun, relaxed vacation we had last year. Oh no. I think it was a whole combination of things, but mostly she’s just changed and now Disneyland seems huge, overwhelming and full of many dark, loud, scary things. Last year the colors, lights and people kept her so interested. This year those same things took her over the edge to mama clingyness times a million.

Tuesday doesn’t really know any of the characters, so rides that seem so innocent (like the new little mermaid one), are insanely scary when you have no idea who the villan is and why they are being so mean. I’m really glad Tuesday doesn’t know the princesses. The whole point of a princess is lame in my opinion, why would a kid want to be one when they can be a space ranger, explorer, etc? I never realized how many really dark elements there are to Disney stories until I was looking at them through the eyes of a three year old. 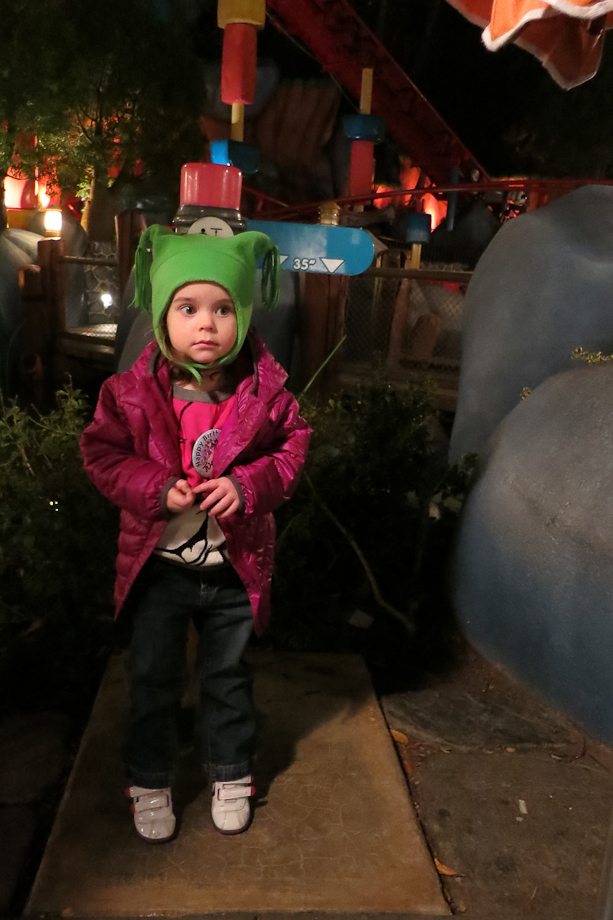 (please tell me I’m not tall enough for this ride)

I really feel so awful that she didn’t have more fun. Things she deemed acceptable: 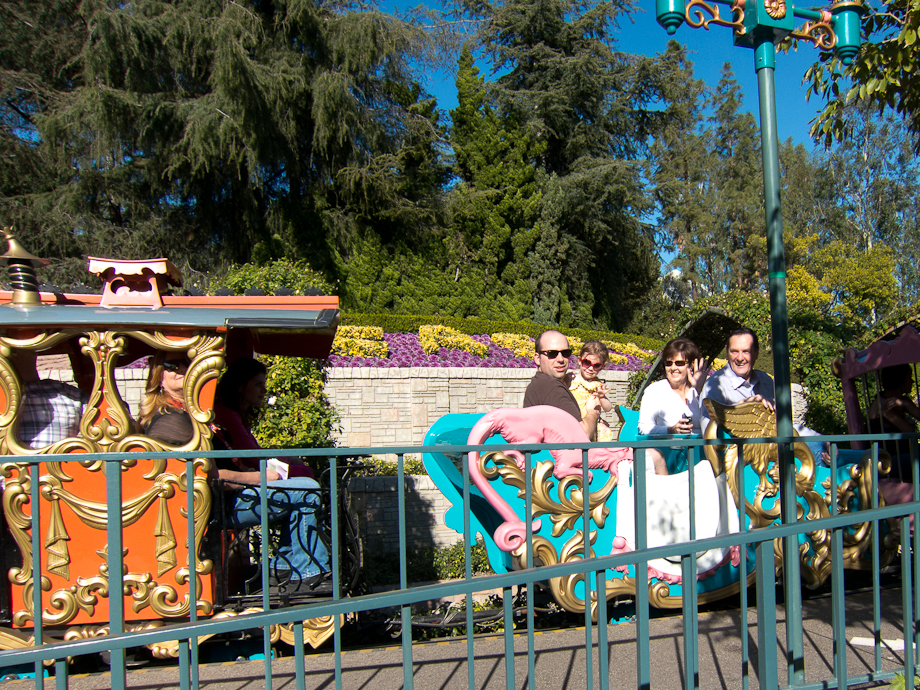 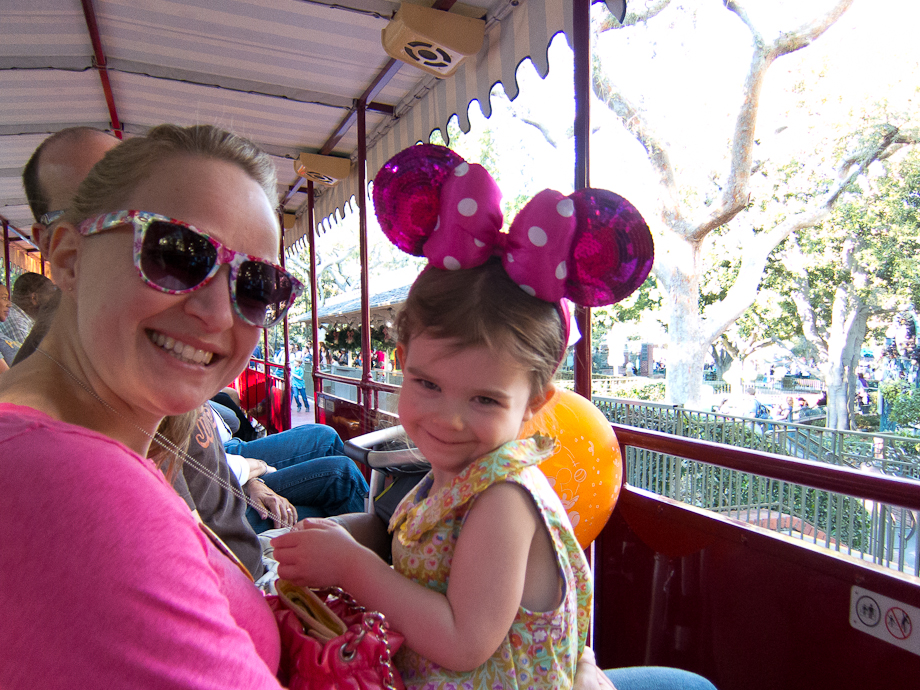 (Sciarrino got to come for a few days, which was awesome.) 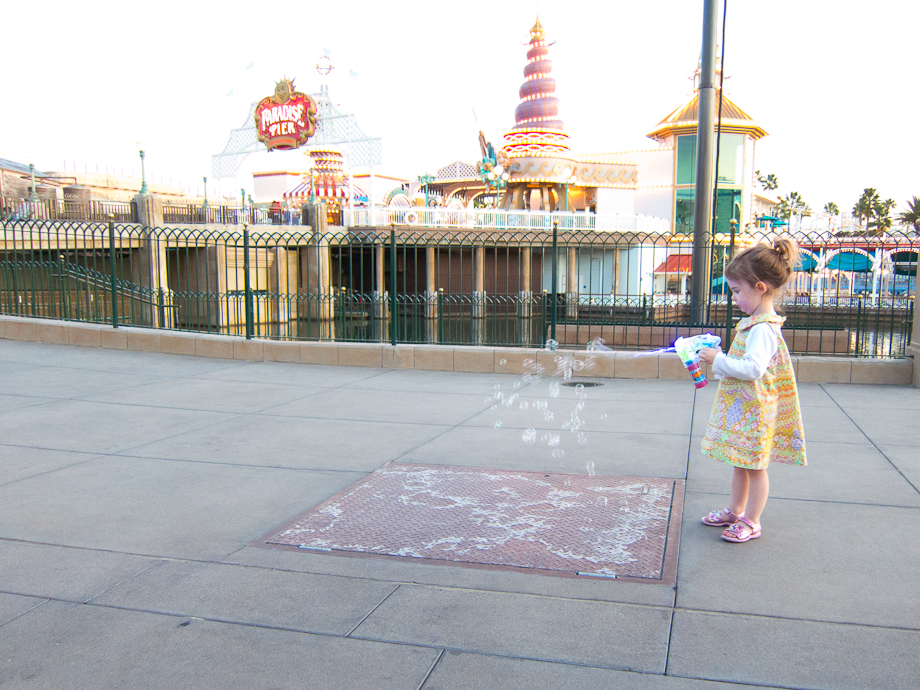 Riding the monorail (she seriously could have done this all day): 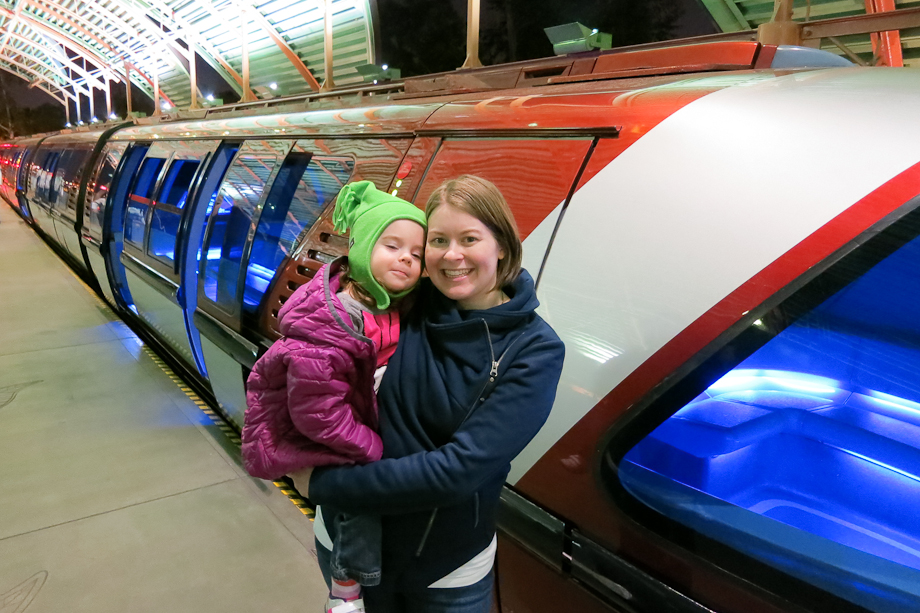 She also really liked meeting Minnie Mouse (while I was holding her of course), and remembered every detail of their encounter. She really just wanted to walk around, and by walk around I mean be pushed in our stroller, facing us. I lobbied hard to bring the big stroller and I’m so glad I didn’t let up, we really needed it. She wanted to be held or in there 99% of the time. I can say three years in that I still LOVE this stroller (we have the bag to travel with us, it comes with a warranty for when the airlines break something) . I have used it so much all over the place in all weather and it looks and works fabulously still. Can’t recommend it enough as a great stroller for the long haul (50 pound max should last us until she ten! ha!). When it got all too overwhelming for her, she just pulled the shade down (there is another hidden inside that makes it so almost her whole body is covered) and snuggled in there. 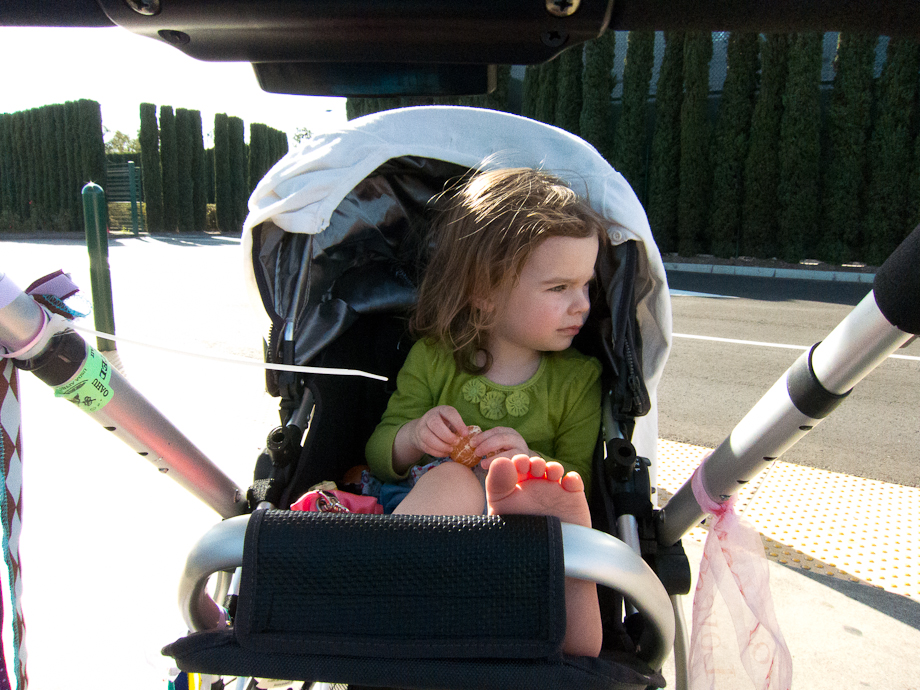 Waiting for the shuttle to take us back to the hotel for a nap.

I think another big problem is that Tuesday and I feed off each other. Bj’s told me this before, and I think he’s right. I was really uptight, and super tired from having to carry her/having her climb all over me all time. I hate being the enforcer of the group, but with grandparents and other people that love her and just want her to have fun it’s hard not to be. I had to say no to yucky foods, I had to say, yes we have to leave for nap, etc. That is so hard and really makes it seem like I’m no fun at all. At the end I was really feeling like a terrible mother for the whole trip, and for not allowing x,y,z, or allowing a,b,c when I knew it would just make things worse. Then to top it all off Tuesday was totally anti birthday on her birthday. She woke up to a room we had decorated while she was sleeping only to tell us, that, no, she was two! No birthday! She calmed down about that later on, luckily.

I think we all need some nice time at home, and I’m going to look for a day Bj doesn’t have to work late and try to do a birthday re-do. Maybe some of her favorite (healthier) foods, her favorite books, outside time, and lots of train play. Really that’s all she wanted and we way overshot.

I think there are lots of good lessons learned here, I’m still pondering what they all are.

*Edited to add: I don’t think that Tuesday really minded that she didn’t like everything at Disneyland, and we certainly had some fun moments (as everyone else on the trip mentioned, they did have fun!). This tired mama is just being honest that not all trips are wonderful, and some are lots of work for us. It’s no one’s fault, it’s just really that you can’t always understand or know what to expect from toddlers and pre-schoolers, as other mama’s of young ones commented. They are fickle funny things, and really do like routines (dispute my terrible attempts at them I guess how we muddle through at home is a routine to her). I’m always going to be up for trying new adventures though, because that’s what life is.

11 Replies to “Disneyland… The scariest place on earth”