Last year I didn’t can at all. Not a single thing. I can’t even remember if I thought about canning. Probably not. At this point in the year I was still like, “whoa two kids, holy shit this is no joke.” Luckily I had many preserves still left from my 2011 can-a-thon. But by the time things were getting ripe this year I was itching to get more put up. I froze lots of berries, and some veggies, but I really wanted to can. And my first big batch was the corn. My friend and I made roasted corn salsa, corn relish, creamed corn, and plain old corn. Because of the corn I was introduced to pressure canning and it was not scary! Water bath is still easier though and it’s what I do most.
This year there was a perfect storm that caused me to go a little crazy in the canning department. First of all I got so much wonderful produce for free or super cheap. The 90 lbs of tomatoes were 40¢ a pound, for example. My mother in law came to stay with me one week while Bj was out of town and I got so much more done with her around. 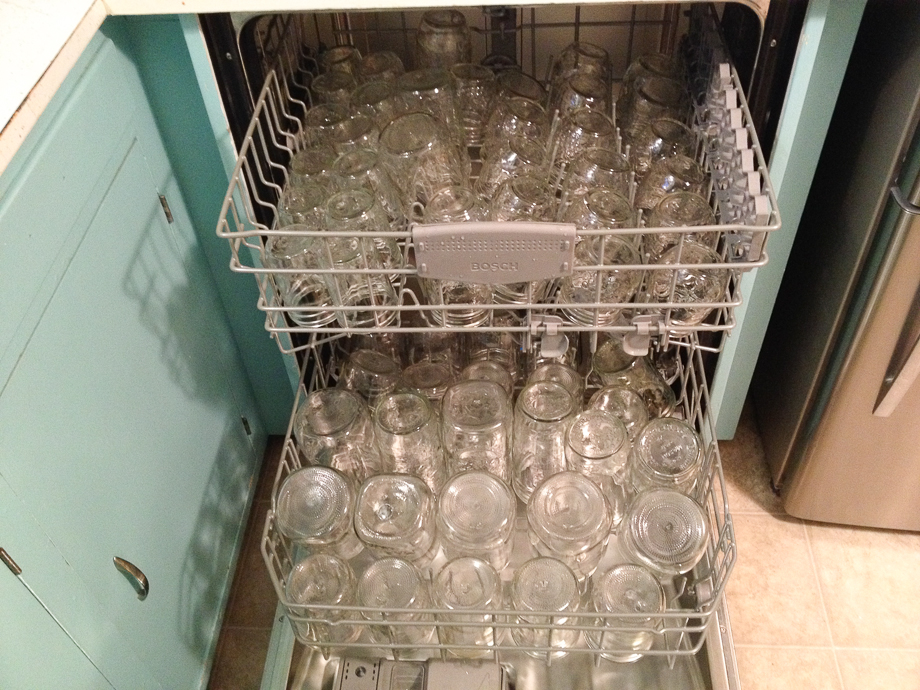 (a small amount of my “new” jar stash all clean)
So when I found a listing for a bunch of canning jars in Yakima I asked my mother in law if she would drive the hour from her place to get them. She said yes and last week we drive to Hood River so we could meet at about halfway between our towns and I could pick them up (well some… They wouldn’t all fit in my car since I had the girls! I believe she still have 7 dozen quarts at her house for me!). 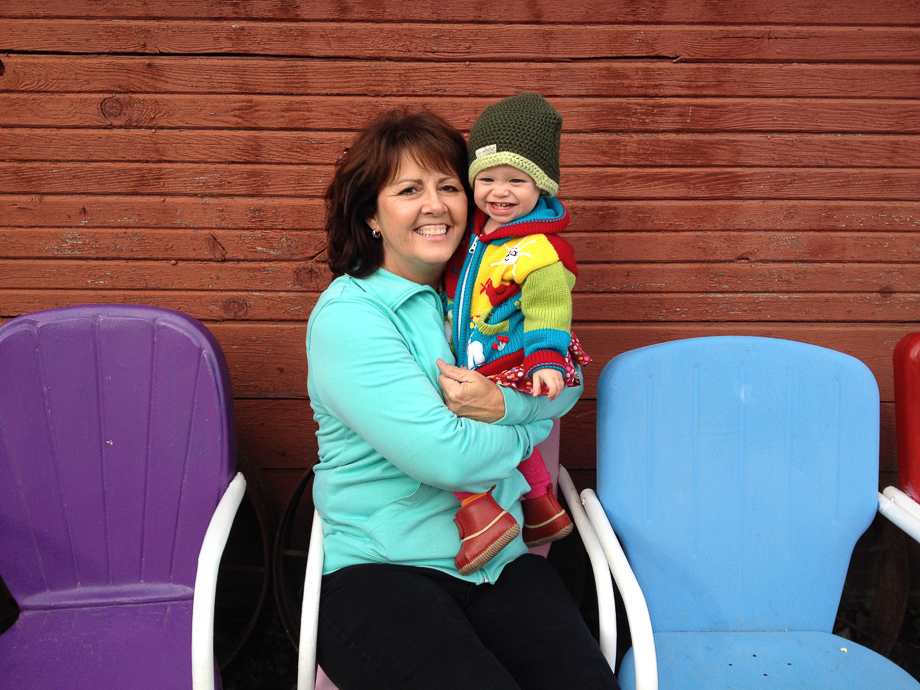 We had a blast in Hood River, making some stops along the “fruit loop” (and getting more things to can, oops!).
When I got home I realized that there was no way to organize my hundreds of jars. So this weekend Bj built me a few new shelves and I sat down with my new label maker to organize. 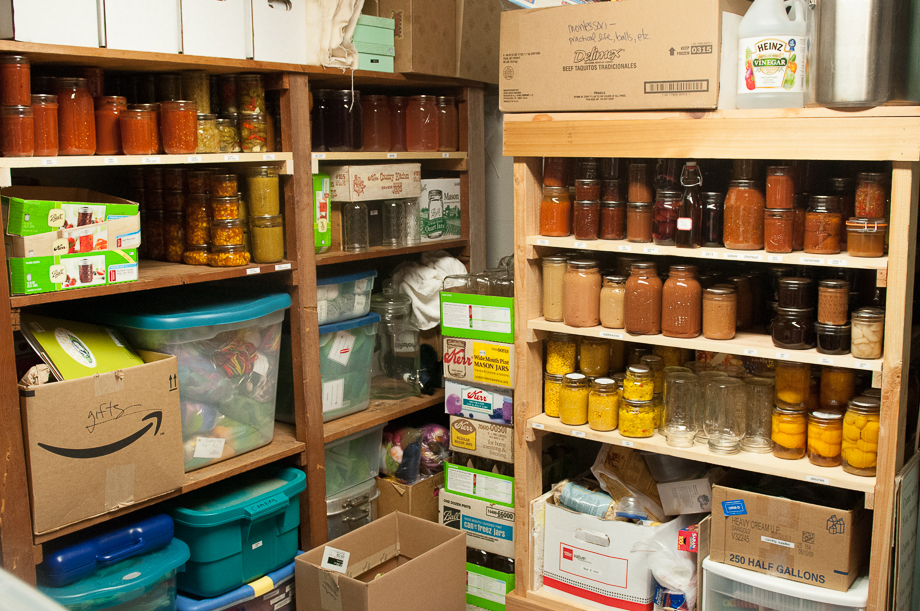 Oh how I love it! All my jars are down here right now, and there are some extra empty boxes too. The cardboard box not on shelves holds squash and pumpkins (I also have potatoes, apples, peppers and tomatoes in the cooler garage). I debated on where to put the things I had left from 2011. Integrate with like preserves or separate shelves? I decided to have a separate area for my older things. They should still be good for a while (I store them in a cool dark area), but flavor and nutrients decline over time so I’d like to use them sooner rather than later. 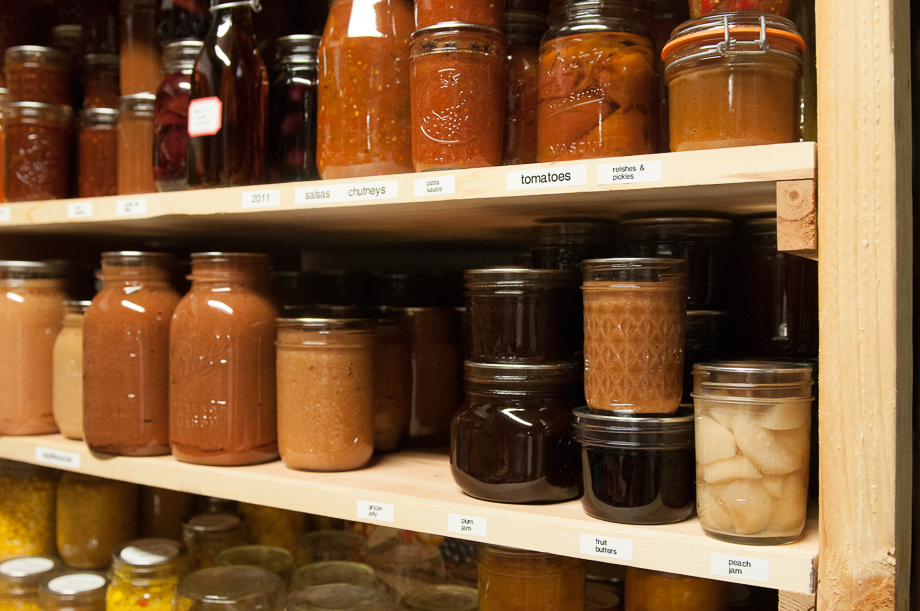 I kept other like things together. And I kept all the canning jar boxes. I like them not only for storing empty jars, but also transporting my finished products.
I love to can for a lot of reasons. Savoring the wonderful bounty of summer is the biggest one for me. I like to try and eat seasonally, so buying tomatoes in December is not my favorite thing to do. I prefer to use my own canned or frozen. And of course making food with less preservatives and chemicals. 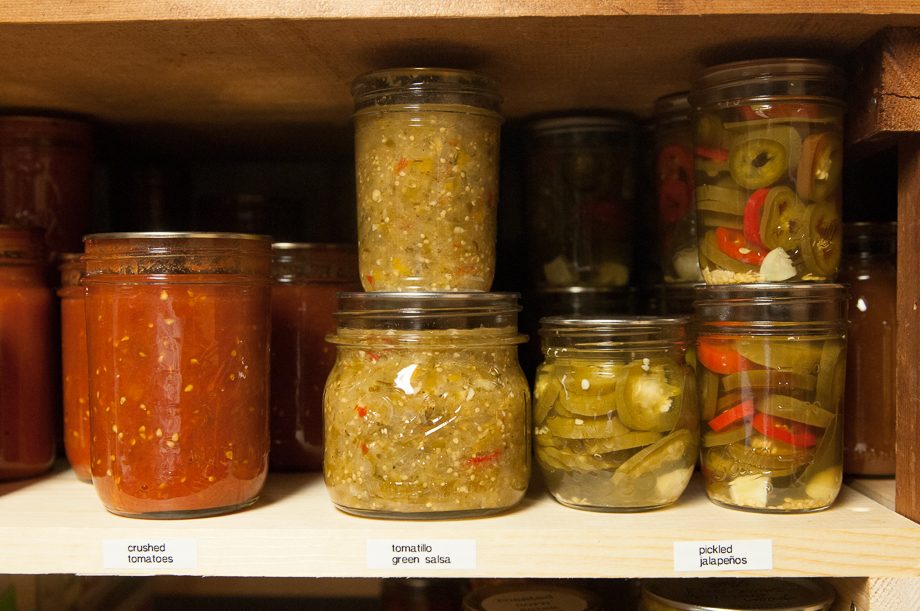 I haven’t been the best at using the canned goods (see above and things from 2011!), but I’m getting a lot better now that I meal plan. I’m hoping this newly organized storage area encourages Bj to use some of this as well. I made a tomato cocktail that seems to bring him down here enough to get him familiar with the goods 🙂
Do you can? What do you like to make? I still have tons of apples and was just gifted a bag of jalapeños, so I’d love ideas for those!
Supplies Used