Our sweet friends were married a few weeks ago in New York, and Bj and I were so happy we were able to attend. It took a little schedule shuffling and baby sitter finding, as things do, but we did it! I decided at the beginning of the summer that Bennet would probably still be nursing (I was right) so I wanted to bring her (we were gone four days, and I’m a terrible pumper). This presented a little problem because the wedding was absolutely no kids; the hillside venue doesn’t allow it. I found a great baby sitter through the venue and she came to the little cabin we rented (an AirBNB). Tuesday stayed with Grandma and Grandpa (“only four days Mama???”). It was a great trip, and fun to travel just with Bennie (holy crap how easy is just one kid?!?!?!). We’d never explored this area before (Hudson River Valley/Catskills) and LOVED it. 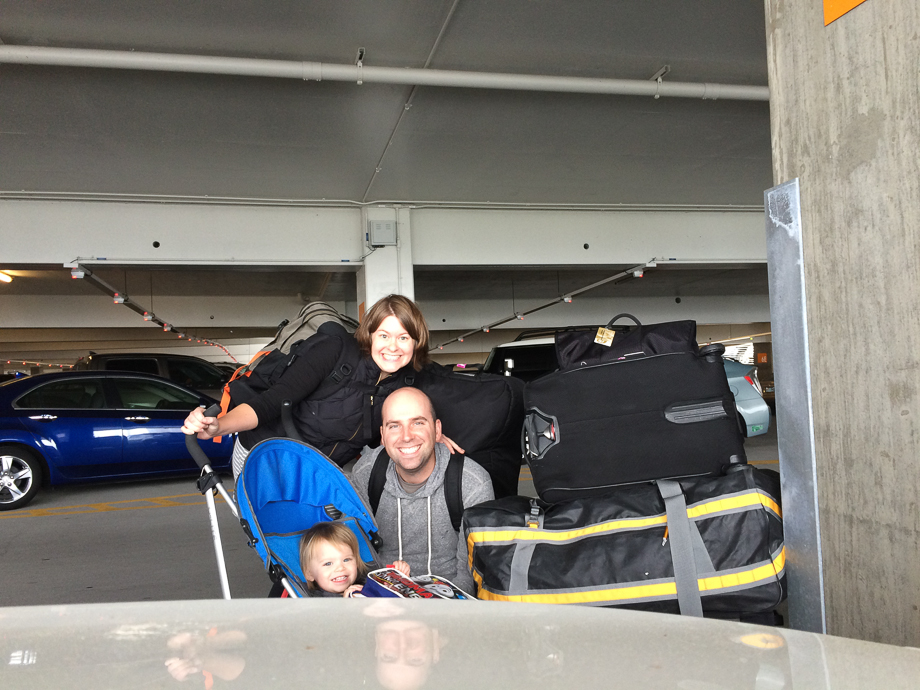 Of course I packed a ton, it is totally my weakness. In the end we used pretty much everything, though it wasn’t as cold as I thought. It’s hard when you have a messy toddler and no access to laundry facilities. 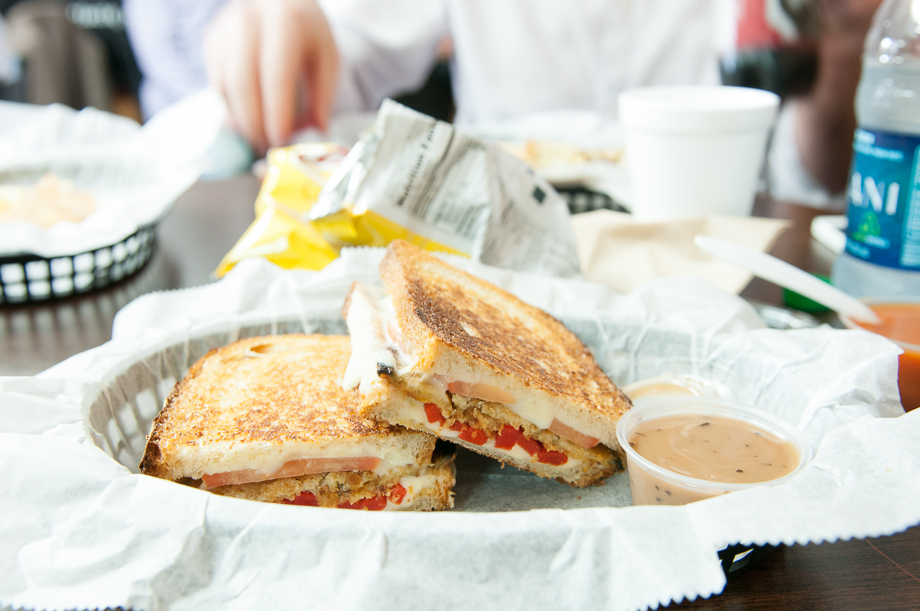 Two of the nights we stayed just outside of the airport area, in Morristown, NJ. We ate at this super yummy grilled cheese sandwich place. Here you see mine, which had eggplant, peppers, tomatoes, and CHEESE. Plus a balsamic vinaigrette tip. OMG I loved this. 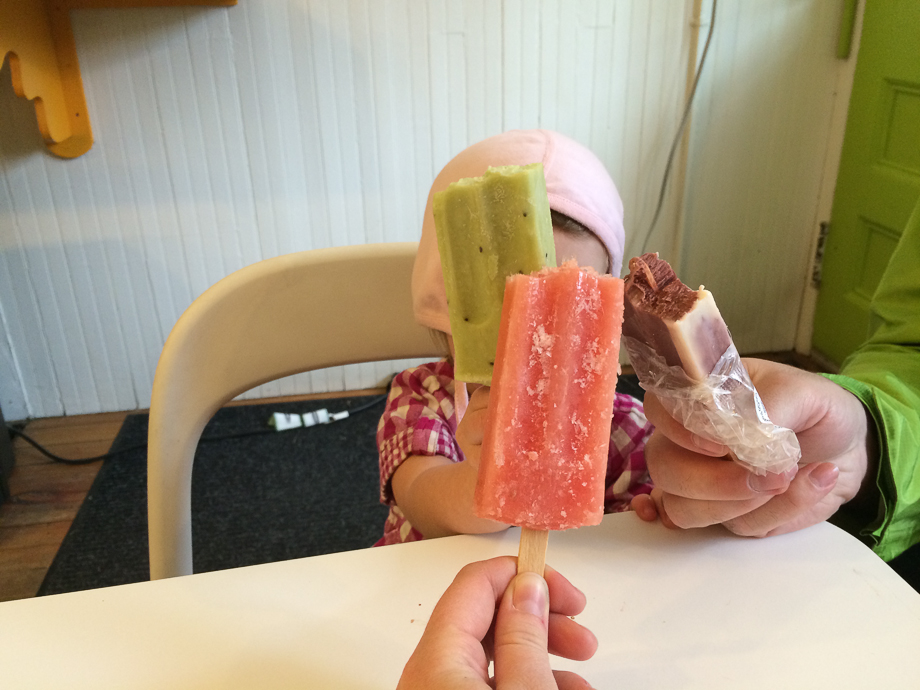 Friday was a travel day and we had a request from Bennet, “a pop-li-lick store” (a popsicle store). Um…. I was sure such a thing did not exist, but low and behold we found one in Cold Springs New York! And it was great. Go Go Pops had lots of flavors, Bennet’s favorite was the avocado kiwi one she’s holding, I loved this watermelon. I was happy to give her whatever she wanted for being so awesome in the car! She finally weighs enough for a half tablet of kids Dramamine, thank goodness. I didn’t know how we were going to survive the windy roads without it! All told we only had one full on throw up incident, which is awesome considering she gets sick driving to Target. This day she slept for two hours after we arrived at Cold Springs. Bj said he’d wait in the car and I spent the time slowly walking through antique stores, HEAVEN! I actually didn’t buy much. I shopped as a proxy for Sciarrino and got her a large metal platter for her collection and a Foley Food Mill in great condition. I got myself a large steel bento type container, and a quilt. Yes a quilt, I’ll save that for another post. This is the one I didn’t get: 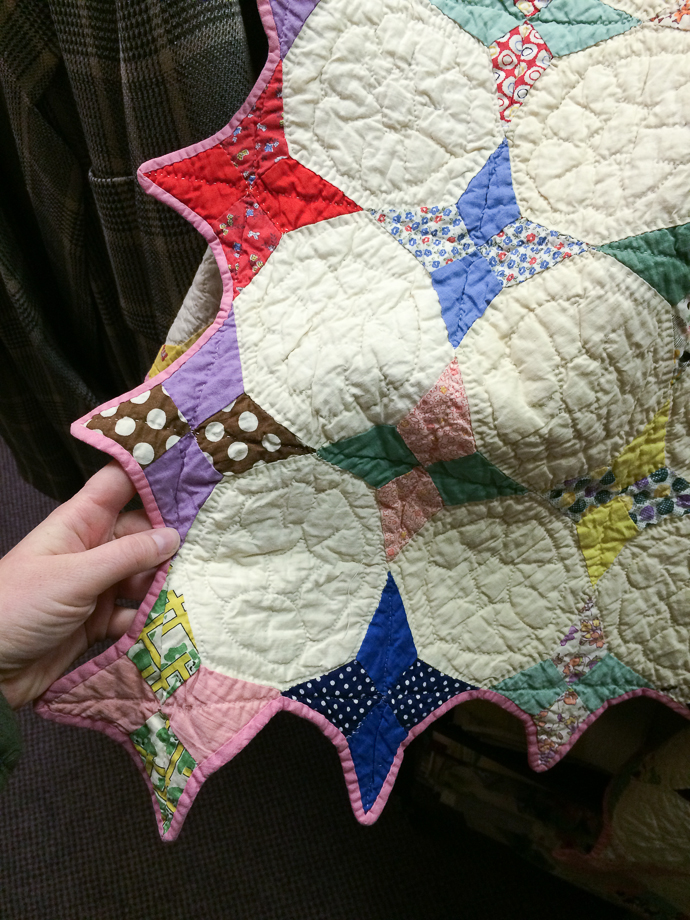 Check out the miles of binding! Wow! I loved it, but I loved the other one I got even more and had to choose. 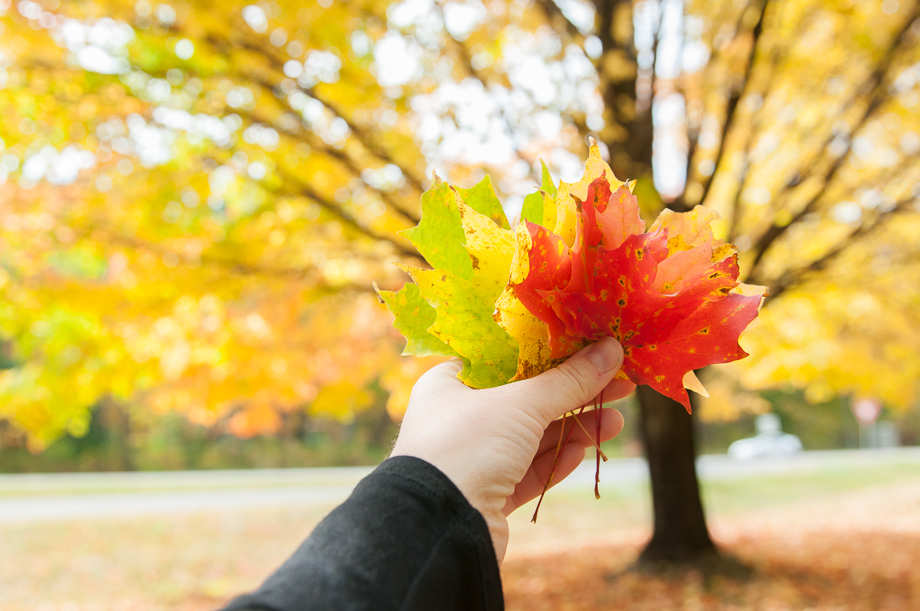 Everything people say about fall colors on the east coast is true, and then some! So beautiful!!! All Tuesday requested from the trip were leaves, so I pressed these in a press I brought to bring her as a souvenir. 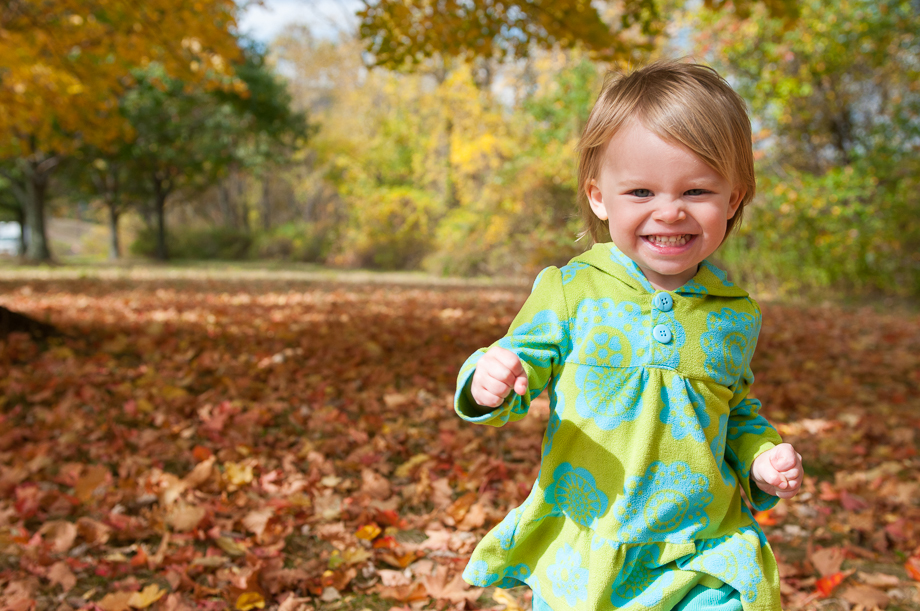 The leaves being crunchy vs. soggy certainly make it easier to play in them! Of course the real reason we were there was the wedding! Krista and Matt had lovely details everywhere. Um, vintage card catalog? YES! And vintage hankies for each guest. Matt is the one who designed my porch (he’s an architect) by sketching something out while we were having lunch like it was no big deal (and I’d been puzzling over what to do for a couple years!), so I shouldn’t have been surprised that he designed a wedding logo! I love the little framed card asking friends to let the professional photographers only take pictures of the ceremony. I think this is a MUST these days. Also, wedding hashtag. Yes to seeing what everyone else is snapping the rest of the night! 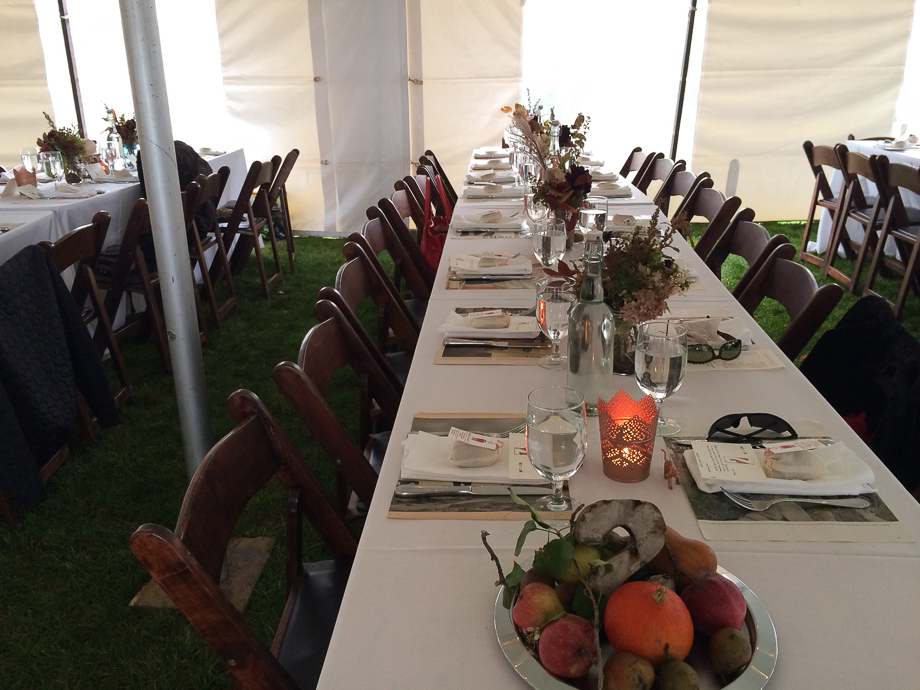 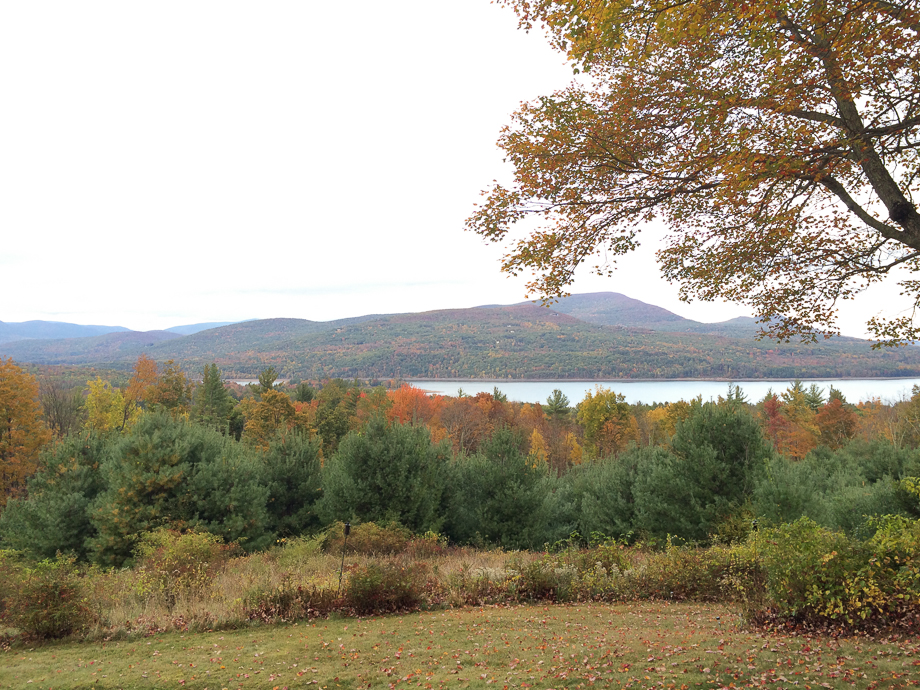 Cell phone pic of the view. Imagine this but ten times more awesome. The bride emailed me a few times warning that it was going to be outside and cold. I think it finally clicked for me the night before we left when I realized I had NO even remotely dressy coat that fit! I panicked, called Sciarrino and told her it was a shopping emergency and could she please meet me at the shops to find something! I did, a lovely (and warm!) wool jacket at Anthropology. It was fun being all cozy and snuggled next to Bj while I teared up during the ceremony. 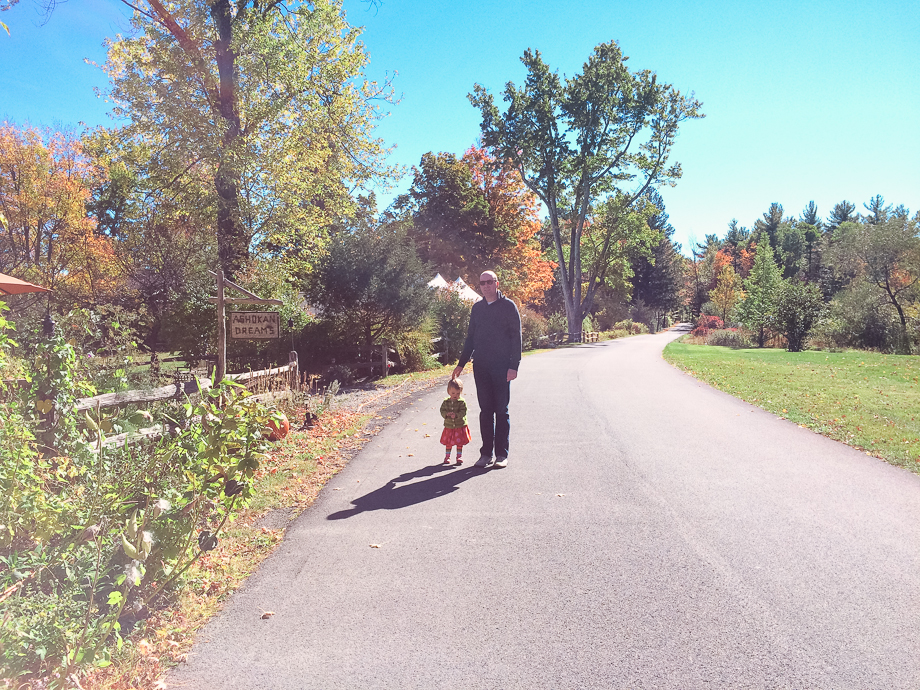 Bj and Bennie at the venue the next day for the bagel breakfast. Holy crap have you seen huge New York style bagels?!?! They are yummy! Because of the aforementioned hashtag I realized that we would be passing close by Storm King. STORM KING. Totally not planned and amazing. I have been so limited on what kind of art I’ve seen lately, and this just fed my soul. I loved it. Me in front of Andy Goldsworthy’s wall. Ahh!!!!!! I must say I was a bit worried because the place was INSANE packed. We parked so far away from any kind of parking lot (of which there are many) that I feared the amount of people would spoil the views of the art. Not so (though I was a bit grumbly about people touching, leaning on and CLIMBING on the art; what the hell people?!?! And why aren’t there more docents out there???). One area you’re encouraged to climb and roll around, Maya Lin’s Storm King Wavefield. Bennet just loved it here. I mean here the whole place. We were able to hope on the little tram to take us part way around, as this was unplanned an the little stroller would not have handled all the natural paths well. Then we walked back up… the grasses, the leaves, the various types of trails. Oh man, if I lived any where near here I would be getting an annual pass for sure. I can only imagine how it changes with the seasons. 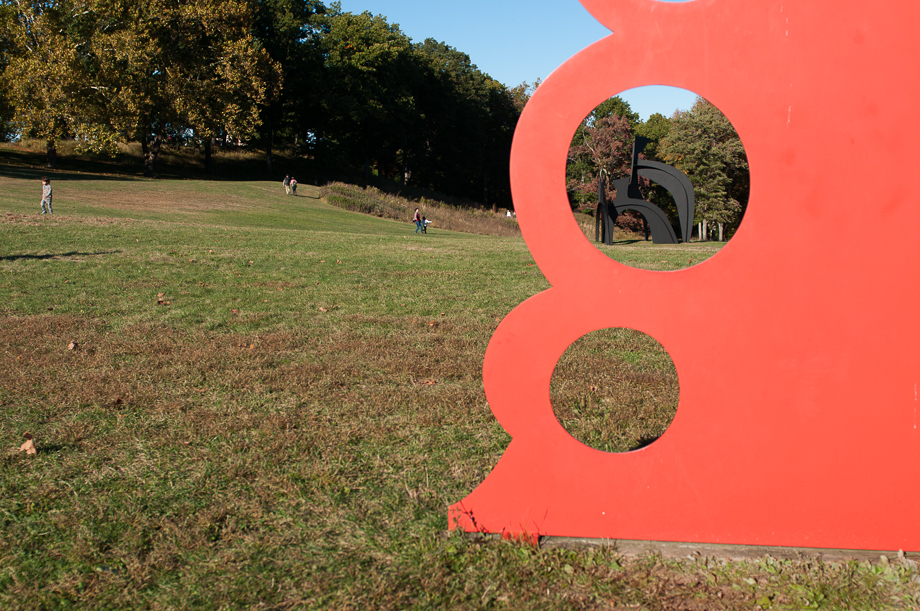 I didn’t take many pictures. I did buy a book about the place, but wanted to spend my time there mostly soaking things in, instead of getting pictures. We finished off the day back in Morristown at a combo sushi/Japanese/Korean place. BEST IDEA EVER. Sushi for him, Korean for me. mmmmm. That stone bowl is no joke though, keeps the food so freaking hot I burned the side of my mouth. And Bennet, how did she travel? Great! She loved having all our attention. Despite the pain that is carrying on carseats (through security, schlepping them around, etc.), I still recommend it. She’s used to sitting in one in the car, and she took two hours naps on both cross country flights, which was relaxing for us since she was in here (I just nursed her and then carefully laid her in and buckled her). I did make a indestructible toddler mini book. Because apparently I HAVE to stay up super late before we leave on every trip and I absolutely MUST leave my knitting packing until the car ride up there. I know how much Bj loves to get the car started while I wind one more skein of yarn! Ha! We brought snacks and stickers and silly putty and it was great. I mean not relaxing like we were on our own, but you know. And we managed to sit by a totally out of control family not once, BUT TWICE, there and back. This is where someone might say they sat by terrible kids, but I have to put this on the parents. Telling your kid, “Stop running or you’ll be kicked off the plane” is just stupid and hearing the mom tell her screaming nearly two year old, “Nobody cares about your problems” made my heart hurt. But their screaming made my ears hurt. It IS a lot of work to take care of little kids on a plane. And it IS exhausting. And I’ll never forget the first flight I took with just me and toddler Tuesday. A man said to me as he was leaving what a good job I did. I think he said something like, “You worked your butt off that flight, and we all appreciate it.” So that’s what I continue to do, work my butt off on the flights and have a happy kid. So far so good (minus that one sick Tuesday coming home from Hawaii time, but I swear I did try everything).