Thank you so much for all your kind words. Grandpa is doing okay. He doesn’t have a feeding tube, but something called TPN. The nurses described it to me as proteins, fats and vitamins in their most basic form. It goes right into a main vein and enters his blood stream. It skips his digestive system, which is good because that system seems to be working against him. The terrible thing is sitting with him and having him ask over and over for something to drink or eat. He made a list today: brick of cheese, white bread slices…. I asked if he wanted a sandwich, he nodded yes. I was able to have to the nurse print out a picture of a throat and how it works and why he can’t have anything (he aspirates it into his lungs). After that he didn’t ask me for anything. And his doctor actually wrote an order for him to have his mouth swabbed with Diet Coke. Swabbing is common to keep the mouth from feeling too dry, and I guess Diet Coke is good for breaking up phlegm. Grandpa doesn’t seem that impressed, he’d rather gulp it down. The good thing about grandpa being naughty and pulling out tubes and drinking things he shouldn’t is that he now is on 24 hour 1 on 1. So there is always someone with him in his room. Just sitting with him. He doesn’t sleep much. He does stuff like this:

To keep himself busy. He’s writing lots of notes as it is still hard for him to talk. My mom can attest to his cuteness with these notes. He wrote her a series of them when she visited with me this evening.
"Nice to see you again."
"You’re so cute."
"39" (when asked what he thought her age was)
"I could wrap you up and take you home." (we were laughing so hard at this, and so was grandpa).
He asked for a picture of my mom and I to have in his room, so I’ll bring him one tomorrow. Bj’s on a business trip so we set up the iChat and had grandpa and him "chat" He wrote out notes and then I’d read them.
"Dear grandson, I love you more than anything."
That got me, but I’ve been good at being upbeat in his room. I usually cry because I don’t want to go before hand, and then cry after. But sometimes I cry there, like when I gave him these socks. 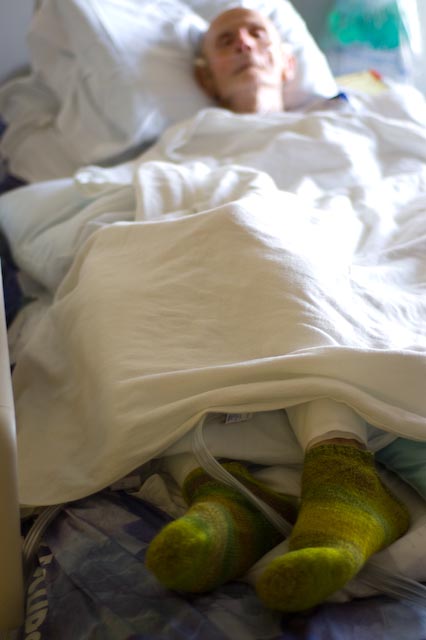 He was so excited. They are the ones I had given to Bj due to my major mis-calculations. I stuck my feet up because he said, what about mine. So I said these are yours, and these are mine see: 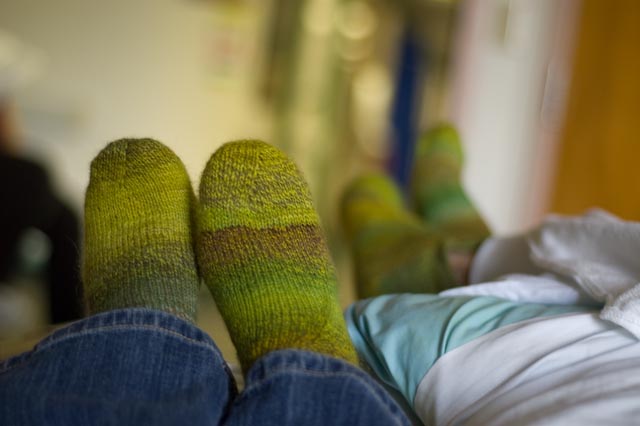 He got a kick out of that. I finished these socks actually in the car, as grandpa is quite busy in the room and I don’t actually get that much knitting done. 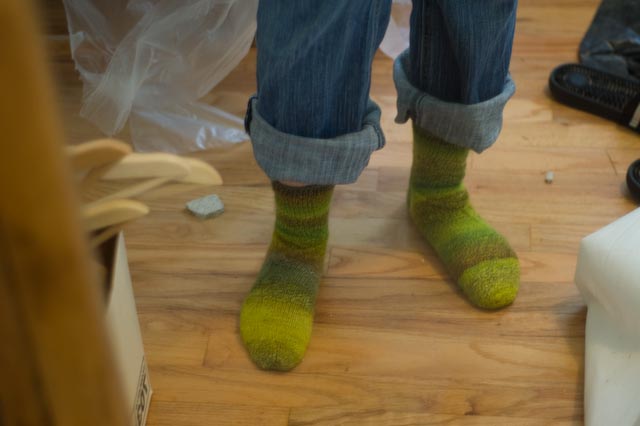 That’s my bedroom floor if you want to know how the rest of my life is going. 🙂 Chaos. Seriously. My mom even bought me ice cream. My mom likes health food and doesn’t eat much bad stuff at all. Cooks all her meals (mmm mom make me some stew), so you can tell she feels for me when she says the Ben and Jerry’s is on her. Then I put two mini Butterfingers in there to make it extra terrible for me and baby. Bj and I have been going to our Bradley classes and I had to fill out my food plan for the week. "Yes," I told my teacher, "lunch that day really was four mini milkyways." (side note, mini candy bars never seem as bad as the big ones, right?). Not exactly hitting the million grams of protein that I’m supposed to aim for. I’m sorry baby, Mama still loves you lots. I still haven’t had a Diet Coke, do I get bonus points for that? I can’t eat or drink in grandpa’s room because that would be evil, so I tend to do the stuff my face thing later.

Speaking of the baby… It moves around enough that I feel it a few times a day. Not as much as it was on our trip, I don’t know if stress mellows it out or what. I’m beginning to feel a bit of a panic with not having anything really ready. Thank god I have boobs, otherwise I might really be freaking out. I went over to my moms for a second Sunday (to mooch food of course) and she had pulled out my old cradle. She’s going to fix it up for me, get a new mattress, make a bumper, all that so the baby will have some where to sleep. Of course where will we put that thing, I have no idea. I have a baby car seat (thank V!). I’m knitting a blanket, and I did manage to register at the cutest little baby place before chaos really hit. Sooo cute, check out the little site they made me. I figure we have the diapers picked out, so if it comes down to it we’ll just place a big order and rush it. I have a sling already from my step mom, so if we don’t get a stroller for a while we should manage (although I was going to use the bassinet on the one we picked out for next to the bed). And I just realized the diaper bag that we both decided would be cool enough to carry is out of stock everywhere in the color combo (Ogo) that I wanted. 🙁 If anyone sees this would they let me know? Note to self, maybe waiting on everything isn’t the best idea. Grandpa is being terribly cute about baby. He asked for pictures of it (ultrasound) for his room, so those are up now. He always says bye to baby. It’s not just my hormones, some of the nurses have teared up at that too. I don’t know what I’ll think when I look back to this time in my life. I think that’s why I have to write it all down. Because it’s a lot to take and fast and slow at the same time. I still remember getting grandpa his first track suit. Time is something I may never fully understand. Big love to all those in blogland sending their wishes. Happy things for you as well!!!