GOOD JOB EMILY – YOU GOT IT ON THE NOSE. THE TREE WAS 97 YEARS OLD.

Remember when I said our power was out? This is why: 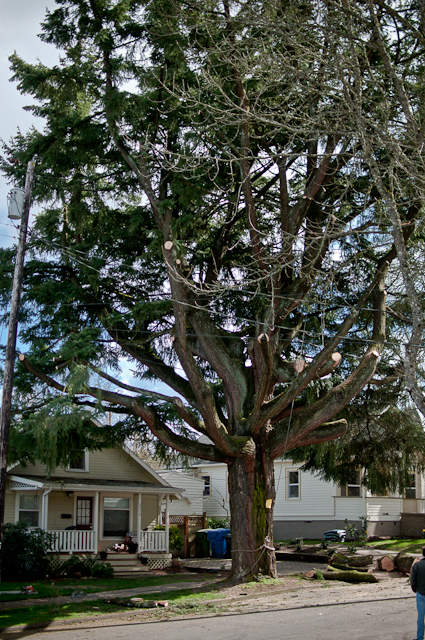 Dwarfs their house a bit huh? 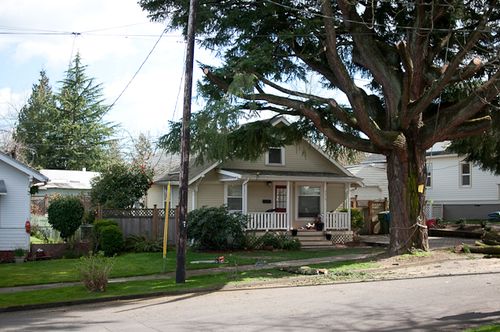 This is my neighbor's tree AFTER a whole day of trimming, and it actually looks pretty good here. This giant cedar was neglected by the city (in our town those areas in front of sidewalks are managed by the city), so it got all wonky and out of control. My neighbor wanted a branch cut that was on his house, the city said no and ended up cutting down the whole tree. Um… logic? Anyway it's been quite a process, they've been at it for eight days now. 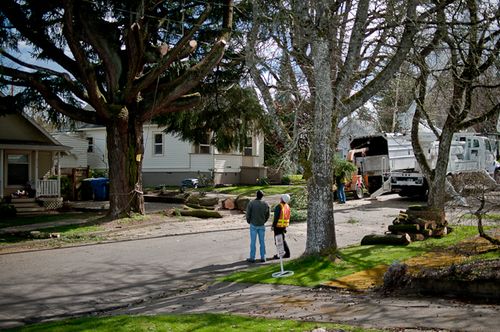 They come and cut and then in the afternoons/evenings the juvenile detention boys come and cut it up for fire wood and haul it off to give to needy families (when things go on in my neighborhood I like to talk to the workers, but I'm not that nosey, I swear!). 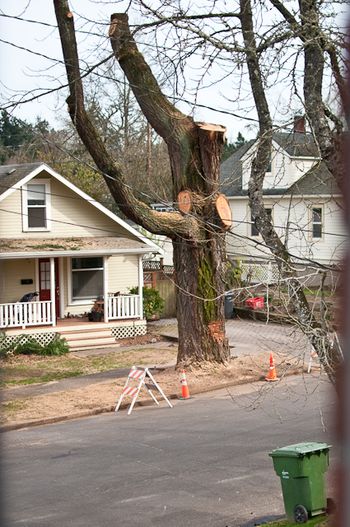 End of the week last week. Tuesday has been loving watching all of this from our little window upstairs. And by loving I mean fully body spasms of happiness. Today was the big day. They still had a few branches to get down. 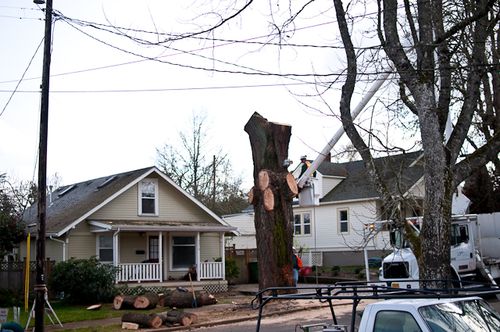 They used a pulley system to get all of those down, it was actually pretty interesting, but I never got a picture of it. Once they got to this point they used wedges. This was about when the guy got his chainsaw stuck. 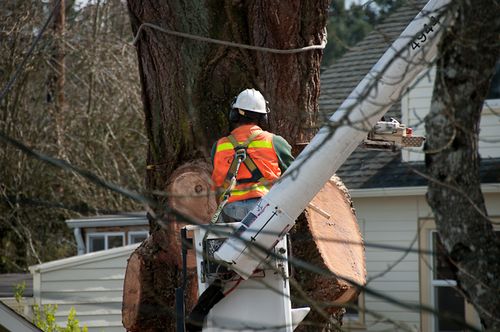 Which I found amusing. Until he started hitting it with an ax. I was sure I was going to see blood. 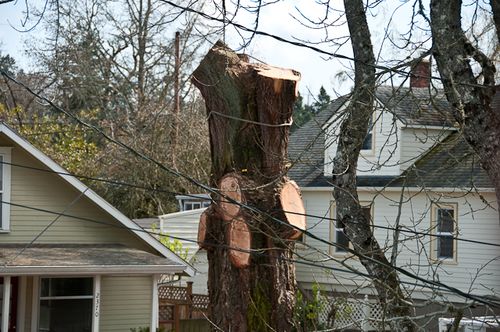 But he got it figured out. Here the tree is all wedged and ready to go. 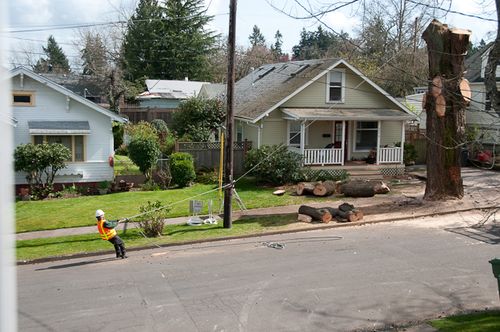 I also didn't think this idea of using the power pole for a pulley set up was the best, but 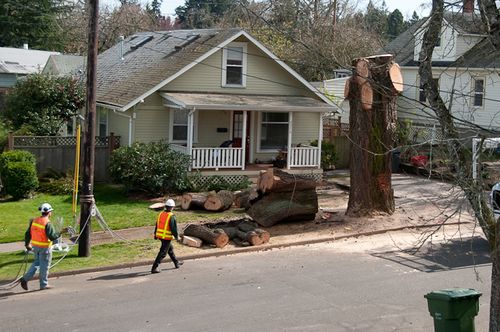 it worked. And did this to the sidewalk. 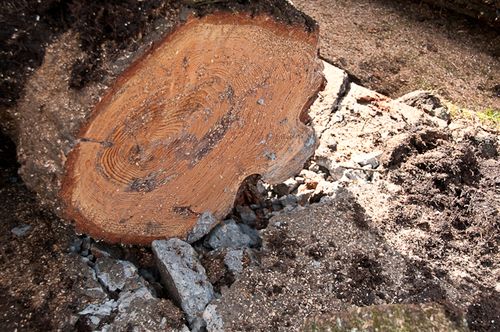 And rumbled our house. But the big show was to come.

I thought it would be a while and all the sudden I look outside and it's like this so I run to grab my camera. 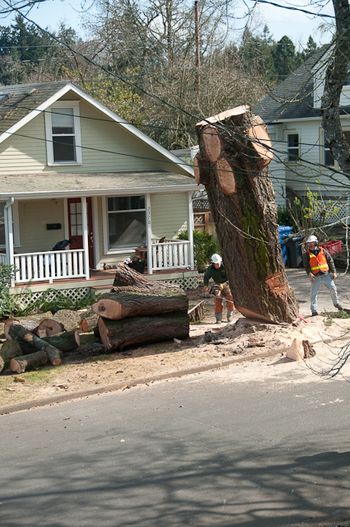 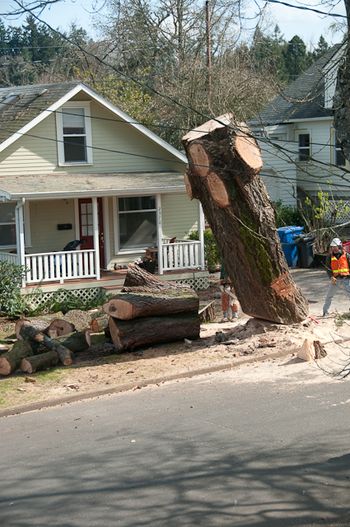 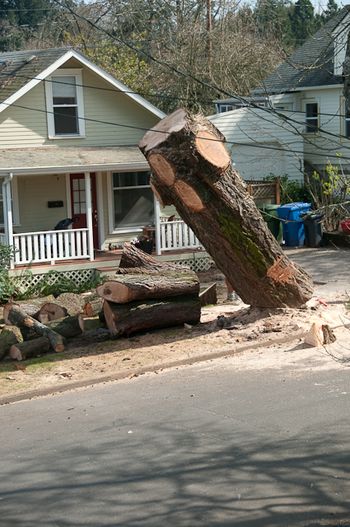 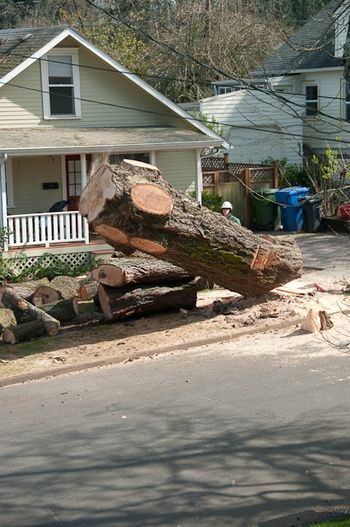 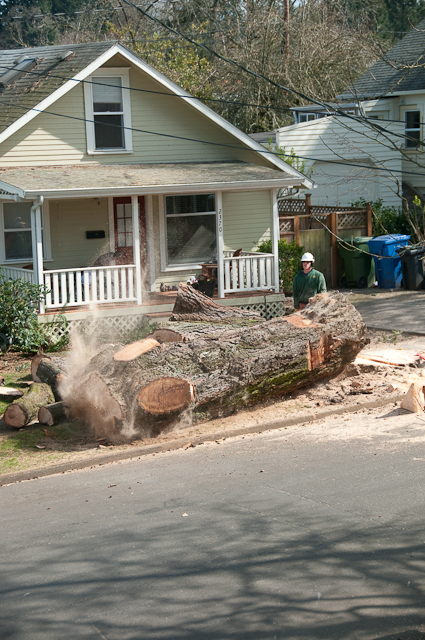 I happened to snap this: 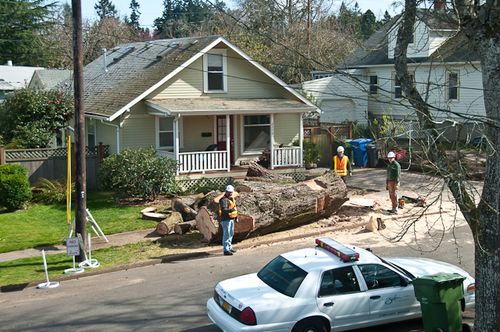 The boss drove up just after it happened and the worker there is giving a thumbs up. Of course I had to go check this out myself (Tuesday was napping). I'm sure you want a good scale shot, well don't worry because I am the nerd who is going to fulfill your wishes. 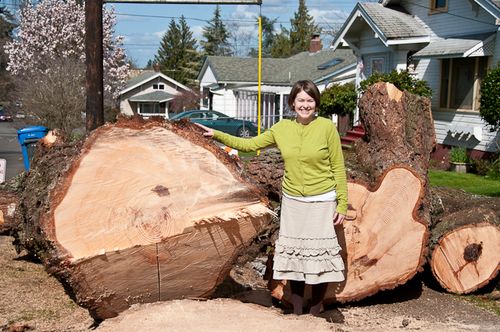 The guy's response to taking my picture? "um, ok." You can't see the guy just out of frame who lit up a cigarette right after the tree came down. Hmm. Of course I had to ask how old the tree was (they weren't going to check!). The guy said as long as the boss wasn't looking, checked over his shoulder and counted for me. He told me his estimate and explained some tree growth stuff. Then he told me that my neighbors will probably have to wait to get new trees planted because he had already planted his allotment (only 250 trees) around town. Boo on that. I'm glad this is down for my neighbor's sake, it was so scary every time we had ice storms and our street was littered with the smaller branches. We all kind of felt like it was only a matter of time.

Oh and I asked what they were going to do with this big log. I thought they would sell it to a mill because it's beautiful cedar. The guy said that no one would come get it because it would cost a lot to get a self loading log truck in here. Plus he didn't think there were any more mills in the area that could take logs this big (forestry is a big industry here but it's a very managed thing so no old growth like this is being cut anymore). So this too will be cut up into firewood for the needy. Now, I'd like to know how heavy this this was! Isn't nature the coolest?

SO how old do you think this thing is? I'm 5'4" (what? I'm wearing clogs!). I don't have a specific prize in mind, it could be a bundle of fat quarters with a tree theme, or some handspun, or fiber or scrapbooking stuff… I have a lot of crafty goodness in here, so I'll quiz you and pick something good. Guess away, if two people guess the right age I'll put the names in a hat and pick one.

edited to add: closest either way wins, and I'll leave this open until Thursday 11:59 PM (pacific).