I’ve been busy like I think most of you are this time of year. I’m so enjoying family time, and Tuesday’s reaction to everything Christmas (the lights! the tree! the presents!). The days seem to be going by quicker (and the super short amount of daylight doesn’t help!). I was happy to see my studio looking like this yesterday: 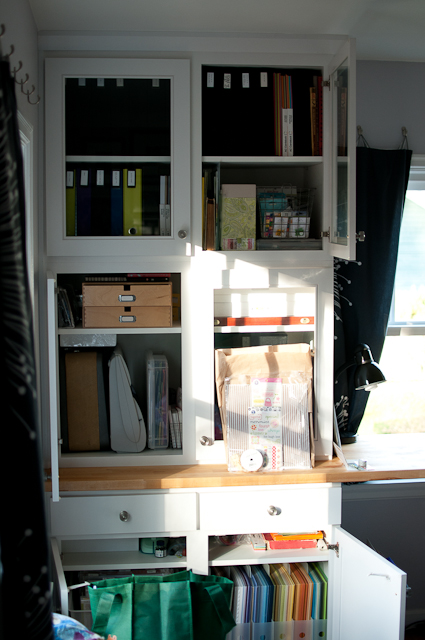 Bathed in light! I took advantage of it and merged an idea I had earlier in the year, with one from the Yarn Harlot to come up with some stockpile kits from my own stash! 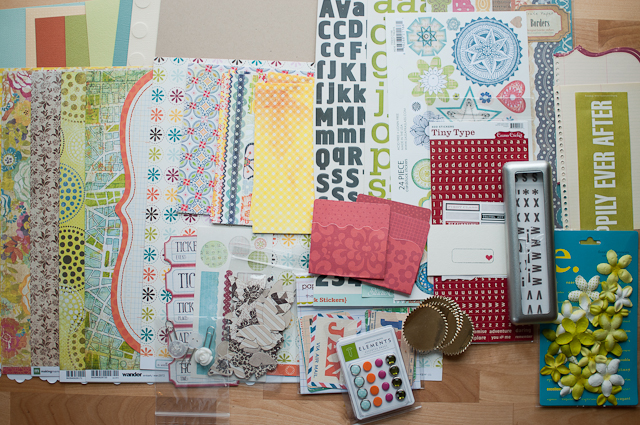 You might remember when I made myself a kit back in September and the mad scrapping that came out of it (that I realized today I still haven’t put away into albums, oops!). 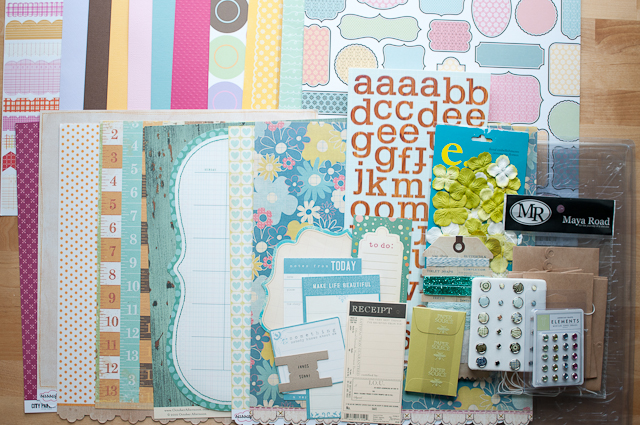 Well I decided to put together some more to have to pull out through out the year. Stephanie (the Yarn Harlot) made herself a sock of the month club out of her stash of sock yarn and sock knitting patterns. She’s made up a pair every month and all she had to do was pull out the baggie of yarn + pattern and grab some needles. I love that idea. 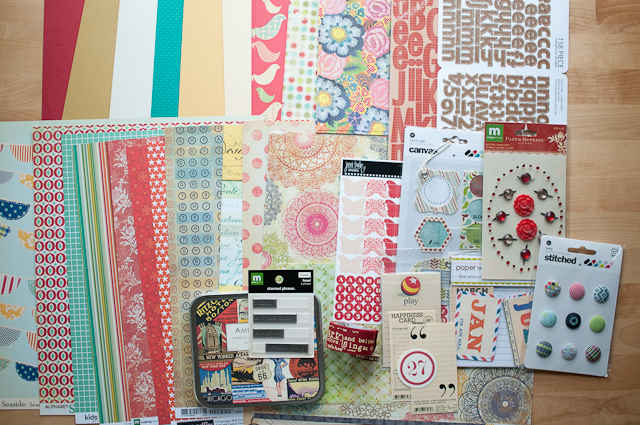 I didn’t make up a dozen kits. But I did make four, plus one to dig into now (now being a relative term as I’m still merry making of course). 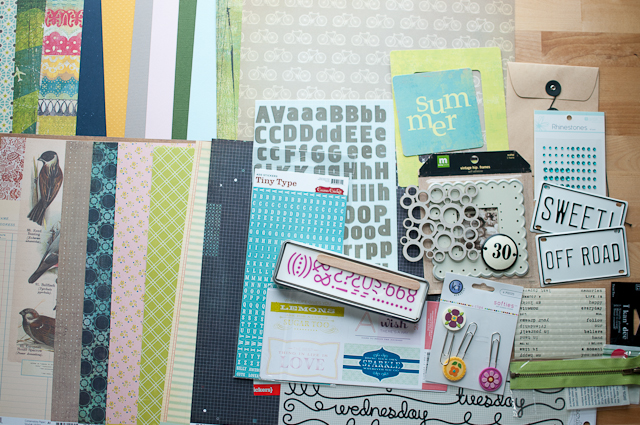 I tried to always include something older and something I especially love. 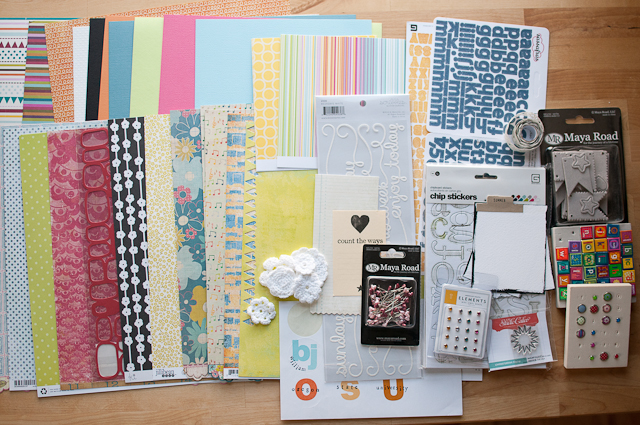 This bottom kit is the play with me now one I have sitting in a little tray on my desk. I have had this Klak tray from Ikea for years and it works great for pages/kits in progress.
I have realized a couple of things.
1. I have a lot of scrapbooking supplies.
2. I love them.
We have also re-arranged Tuesday’s room in preparation for her someday getting the railing off her crib and turing it into a bed. 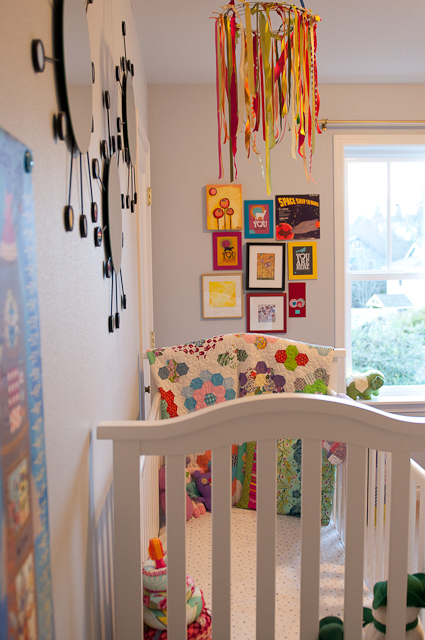 I haven’t done a real nursery tour (at least I can’t remember doing one), because I didn’t actually get a bunch of matching stuff and decorate it like traditional nursery (lazy, plus the room was done being built about one week before Tuesday was born). 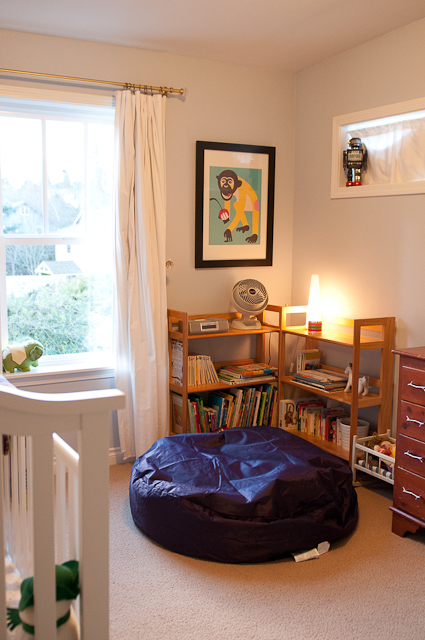 I ordered this giant beanbag for newborn photo shoots, but I’ll leave it uncovered in here when I’m not using it. Tuesday is loving this little nook (this is where the big reclining rocking chair was, we flip floped the furniture and put the bookcases in an L). 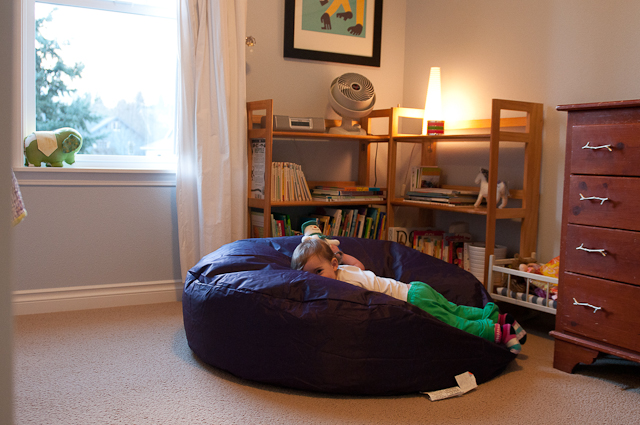 I finally put the branch drawer pulls on her dresser (that my grandfather made). I wanted to wait until it was painted white (along with the shelves for a more cohesive look), but who knows when I’ll get to that, and the other ones kept loosening up on me. 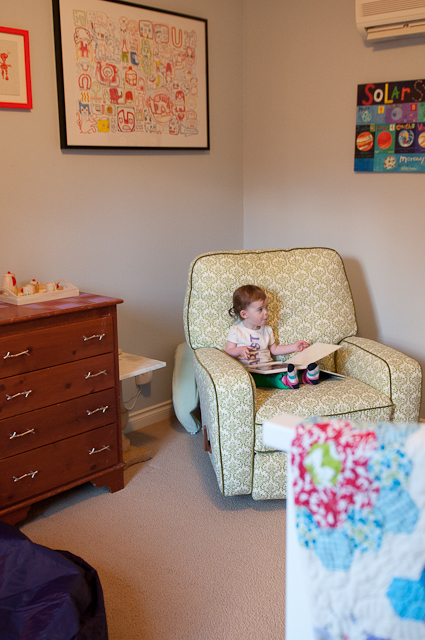 Where the giant chair is now. It takes up tons of space (has to be pulled forward so it can fully recline), and does not look as cool as those modern ones. You know what though? I would be a walking zombie with out this. Whose kid took three hours to get to sleep last night? Mine. Carmen asked me what I would do with my average two hours a night I spend rocking and cuddling Tuesday (Bj splits it with me most nights). I don’t know. Write the great American novel? Scrapbook my entire life in month? Miss cuddling Tuesday? Probably the latter. She is just so damn cute.
Expect more random check-ins until the first of the year when I have excitings things planned (very!).